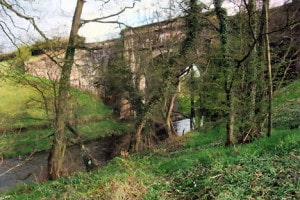 “I’d love a cup of hail-proof tea,” said the Captain once Cleddau was safely back on the Macc.  From Church Lawton up to Kidsgrove, through 6 locks, during a shopping and a watering stop the skies had  not leaked rain and rain caps had not been worn – a great improvement on previous days. But once the sharp right turn from the Trent and Mersey onto the Macclesfield Canal had been made at Hardings Wood Junction, rain, then hail, then rain, then hail, then rain dropped from above. Just occasionally there were splashes of sunshine, although they were all too brief and not very frequent. The tea was served in insulated mugs and a lunch-time cup of soup was also in a covered cup.

There was plenty of boat movement this morning and once or twice boats danced around each other between locks. A down-coming boater reported a new experience in the Harecastle Tunnel: FOG. An up-going boater confessed to heading first for Polesworth (Coventry Canal) but harbouring ambitions to cruise later in the season down the South Oxford, down the Thames and up the Grand Union. In drought-stricken times let’s hope his plan is not just a wistful dream…

The stretch of canal from the Hardings Wood Junction to Red Bull Basin is absolutely straight – just as well as the Captain was steering from under his big blue umbrella groping his way in nil visibility past the moored boats (Flirty Gertie and friends) in the first outbreak of  heavy hail. The anglers at Scholar Green all had umbrellas to hand and all passing boaters made weather-related comments! Up to the right, clear in the unstable cold sector air, was the irregular shape of the Mow Cop folly.

On Cleddau cruised, arriving at Congleton Wharf (again in a rain shower) just as a Heritage day boat was struggling to turn round (and to avoid nb Seyella). At Hightown Boatwif hopped out of the boat (this is the most convenient shopping place on the system) and waded through thick mud, glutinous mud, deep pools, squishy mud and over swampy bits of grass to reach the steps up to street level. If only photographic evidence had been taken of the redder mud of the upper T and M (of slightly different consistency, methinks) then perhaps a mini treatise on towpath mud could have been composed…

By mid-afternoon, under glowering skies, Cleddau was cruising below the Cloud, that sharp and brooding hill, from which came the Chatsworth Gritstone used for the Bosley lock chambers.  A mooring at the bottom of the Bosley Twelve was secured, followed by tea, some boat cake and then a stroll. On no other occasion has Boatwif climbed off the boat for an evening amble clutching an umbrella – a walking pole yes, but not an umbrella. First it was back across the aqueduct and a clamber and a slide down towards the River Dane. Next it was along the towpath and up the lock flight as far as lock 6. In some places the muddy pools seem nearly as wide as the canal. And then, between locks 8 and 9, something moved on the towpath – a tiny field mouse darted from leaf to leaf, nibbling and chewing upon the juicy green foliage. Boatwif kept it company for quite some while, undisturbed by any other voice or boat. Back to Cleddau then, Boatwif shaking out her umbrella to dry; three times during a short stroll it had proved its usefulness! For a few minutes tonight at sunset golden light spread itself over the hills, hedges and waters of this peaceful mooring spot. It’s good to be back in higher terrain!

Tomorrow, aided by Techno Son-in-Law and his Dad, we will climb the Bosley locks and maybe, or maybe not, get back to home moorings.