By 9am on Saturday morning the tide had come in.

Come in from where? From the Wash.  Look downstream

and somewhere further down is King’s Lynn and beyond that the sea.
Behind where Cleddau and Tentatrice were moored was another structure, the Old      Bedford Sluice

and the tide was racing in through it up the tidal Old Bedford River.
Boat checked and ready.
Crew checked, life-jacketed and ready.
At about 9.30 along came the lock keeper on his rickety bike, checking boat lengths and knowledge of what lay ahead. Nb Kingfisher was first to enter the Salter’s Lode lock. Slowly she rose in it. It’s a tight fit and at one point the lock keeper scrambled along Kingfisher’s gunnel to remove the chimney and prevent it from being crushed. Out Kingfisher went, stern beginning to turn as the nose passed the just visible fence post.  Across the stream and a right hand turn perfectly executed

– and off Kingfisher went heading the half mile or so for the Denver Sluice lock.
A boat came downstream from Denver

and completed the sharp left hand turn into Salter’s Lode.
Then came Cleddau’s turn. Into the lock.

There was some jiggling around to fit in diagonally. From somewhere above the lock keeper opened the right hand sluice and in spurted the water.

The boat rose in the lock. Up the lock gate went and the moment had come.

full revs, turn, turn, turn against the falling tide. (See Jennie’s pics from the bank)..
Cleddau cruised upstream and into the open lock at Denver Sluice.

The gates shut behind and then – surprise, surprise – the water level was lowered as Cleddau was dropped down to river level.

Outside two other boats were waiting to make the downstream transit. “Go left past the sailing club

to the slipway for the water point,” advised the lock keeper.
Tentatrice arrived. It was raining hard and an end to the day’s excitement was declared. There are excellent moorings on the opposite bank 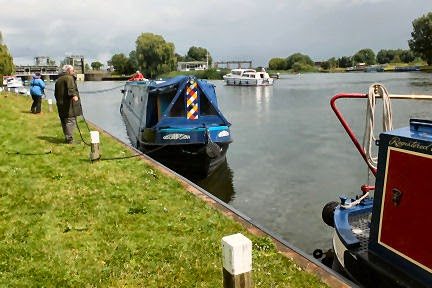 (apart from the goose droppings) and some happy hours were whiled away at the nearby Jenyns Arms.
Walk around the Denver Complex and there’s much to see and read.

Floods, silting, pumping, draining. It was a three hundred and fifty year project to get it right, to prevent flood damage in the Great Ouse catchment, to drain the fens and make rivers navigable.

These massive structures are nothing but impressive!

Sunday: What a lark! The cruise towards the River Lark has been halted, temporarily. Serious continuous (20% chance of showers!) rain has driven the crews to tie up the boats and repair below for cups of tea…