9 miles from Ely along the Great Ouse is The Ship Inn – it sits at the mouth of the Little Ouse River, often referred to as Brandon Creek.

and set off to explore another previously unvisited East Anglian waterway.

To turn onto a river about a third of the width of the Great Ouse came as rather a shock,

especially as the first mile or so of the river is lined both sides with moored boats. Very soon appeared two boats with names that gave a particular resonance: it has been nearly 11 months since Cleddau passed Red Bull Basin en route to the paint shed at Aqueduct Marina

– and this boat, Dinali Dreams, of Nottingham and Alaska, surely hints at an interesting history!

The moorings stretched on along the northern bank, past the cheapest refuelling place on the River Great Ouse system (Little Ouse Farm). One floating structure hereabouts deserved a photograph, a would-be Mississippi showboat

– and one sunbather nearby looked rather short of food…

The river courses through flat fenland where there are few landmarks. It winds and wiggles, passing frequent bands of windbreak trees on the right hand / southern bank. Only an occasional bridge

(just 5 in total over the 14 navigable miles) and various electric overhead power lines help navigators relate boat position to the Little Ouse map… The river feels increasingly remote – and where there are odd structures one can only puzzle as to why they are so dilapidated.

It was Monday afternoon; all around darkened clouds hinted at imminent heavy showers.

And when they came hundreds of birds rose up out of the reeds, gathered overhead, moved away from the storm before descending safely onto a mere…

10 miles from the river mouth a man-made structure lay ahead:

here the river is enclosed in a concrete aqueduct so that in times of flood the gate can be dropped to take excess water down to the Cut-off Channel below. (A view of the concrete-lined channel though was not possible from the river.)

Onwards the river meanders, a railway line to the south, crossing the waterway not far from Brandon. There was a red object in the distance, what was it?

A drum for agricultural irrigation hoses.

Somewhere there is a county boundary and Norfolk becomes Suffolk. It’s a delightful landscape, mid-green reeds, dark green pine, larch and spruce, glimpses of meres and washes which are homes for multitudes of waterfowl.

It was a quiet cruise, a huge area empty of human activity

– except for the occasional two carriage passenger train and the military jets from the nearby USAF base at Lakenheath. As the river nears the head of navigation it narrows and its bends tighten.

Then ahead is a weir,

Brandon Lock to the left of it.

Here boats longer than 40 feet must turn to head back downstream.

Girls’ voices greeted the boats; on a warm school holiday afternoon the slipway below the weir is an attractive paddling point.

Brandon – what sort of place is it?

It is a crossroads town.

Once it was a crossing point of the Little Ouse

There are wide streets and wide pavements but the traffic thunders through. Thetford Forest is not far away and in the 18th and 19th centuries’ rabbit fur factories and the flint knapping industries dominated the local economy.

There is plenty of flint to be seen in the local buildings.

A pleasant day spent pottering about the town

The boats set off downstream on Thursday morning, leaving the clear waters at the mooring behind,

passing under the railway bridge,

weaving the 14 miles back to the Great Ouse.

Ahead a duck managed a spectacular vertical take-off. Herons (always alone) perched sentinel-like on the bank then rose to a steady glide over water and field while swans cossetted their young.

Further along a notice 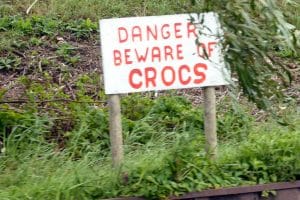 At the Little Ouse Farm moorings both boats’ diesel tanks were topped up (at a very competitive price), fresh water was taken on board and domestic rubbish off-loaded into a boaters’ wheelie bin. Excellent!

And the  verdict on the Little Ouse? For a first foray into Suffolk by boat it was pretty good!