From about a mile out of Ely you can look back and appreciate the immense size of Ely’s Cathedral.

There will be fond memories of this summer’s Ely days. It’s a compact town with a village feel – and many lovely buildings. There are busy spots of course, as well as quiet corners. Look at this little space, quite near the waterfront. 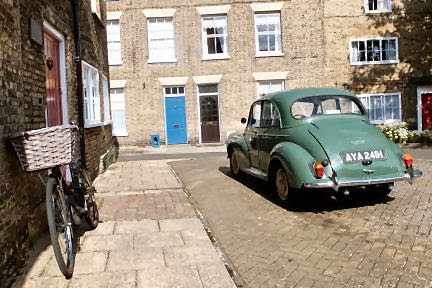 Observe the car – a neat but distinctive Morris Minor. It’s often parked there. For a while however on Tuesday morning it was parked part on the pavement and part on double yellow lines, on a corner, outside the launderette, windows wound right down.  The female driver popped in from time to time to check the clothes in the drier, leaving the car right there. Once the clothes were dry enough she scooped them up, armful after armful, and just posted each load back into the car through the open window before driving off. A male customer watching his clothes in the washer batted half an eyelid – in this village city did he know who she was…?
Once beyond the city boundary and the last railway bridge the river is wider and the banks are higher. Pope’s Corner when you reach it hardly seems a corner. 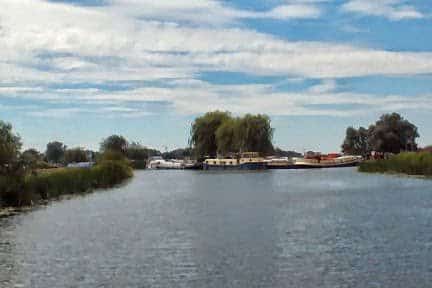 A confusion of boats is moored straight ahead. If a boat skipper’s mind is in neutral here the boat will glide fast and seamlessly onto the River Cam. Keep alert, peer at navigation map and signs, and bear sharp right onto the Old West River. Immediately the channel is narrow and crowded out by moored “fat boats” (as the numerous widebeam boats on these waters have been called). Just look at some of these boat names:
Widerwake, 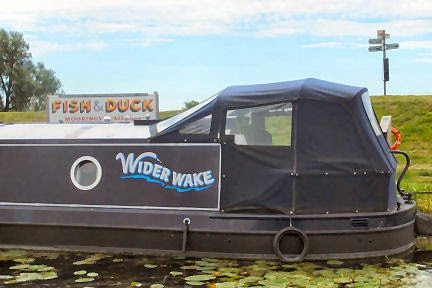 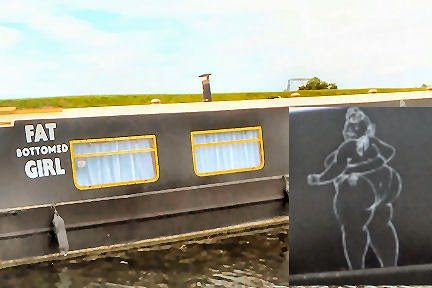 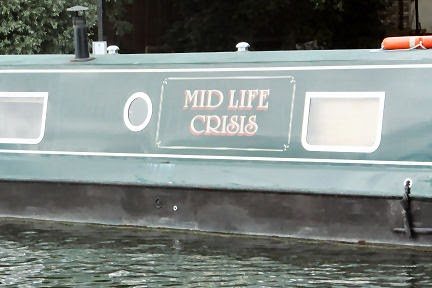 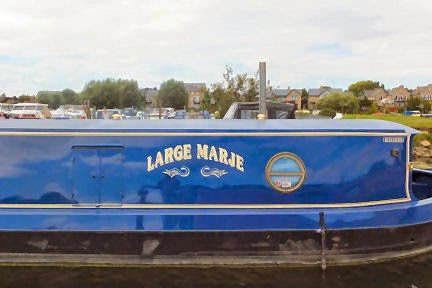 The Old West River is narrower than the Great Ouse, the water flow is faster and the channel weedier. Half a dozen times the throttle was thrown into reverse to try to throw off the insidious reeds and blanket weed. 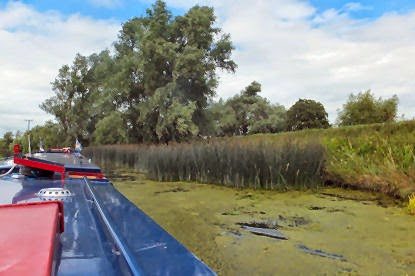 For miles this waterway seems remote from human life. No roads, houses or church towers. Swans paddled in the shallows behind the lily pads, cows bunched together in the shade 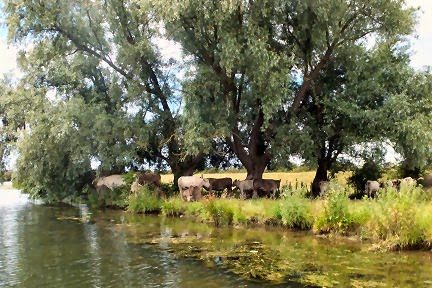 or lapped at the river’s edge. You pass the Stretham Old Engine (built in 1831 to lift water from the fenland into the Old West River) 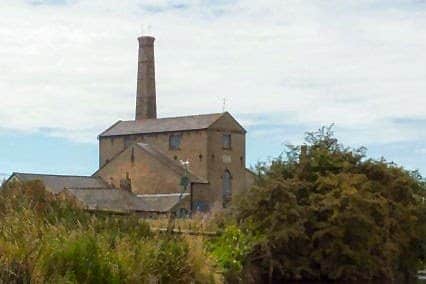 and it’s possible to moor there now to make a visit.
Near here there was a good Monkton Moment*, the second one this week. The Pembrokeshire flag was flying (a helpful aid for giving wind direction). 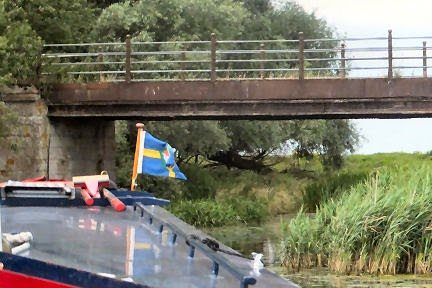 ”Oh, you’re from Pembrokeshire!” shouted a lady from an approaching cruiser. “So are we – NEYLAND!”  Back in Ely a few days ago the Captain had had a similar exchange across the river: “Are you from Pembrokeshire? Pembroke is my favourite place of all!”
This is flag-flying territory now and the Red Ensign has been attached onto the tiller, while from the bow fly the Pembrokeshire flag, the GOBA (Great Ouse Boating Association) pennant and the Kennet and Avon pennant. Tentatrice’s Captain has unfurled flags too, Red Ensign at the stern and a stunning looking Worcestershire county flag at the bow (three black pears against a green and blue background).
On along the Old West River until eventually a road runs parallel with it. There ahead lay Hermitage Lock and a green traffic light allowing access to the lock chamber. 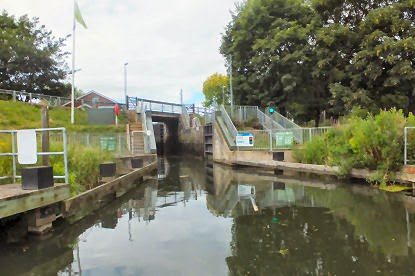 The boat rose, now back on a tidal section. To the right, to Denver, runs the New Bedford River, 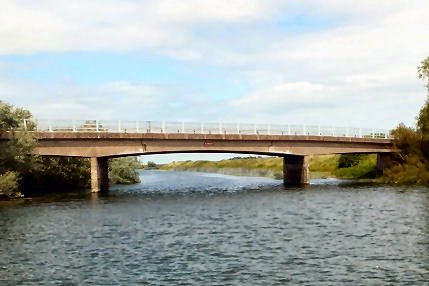 a straight artificial cut of about twenty miles that takes excess water towards the sea.  . A few yards further up are the weirs at the top of the Old Bedford River. 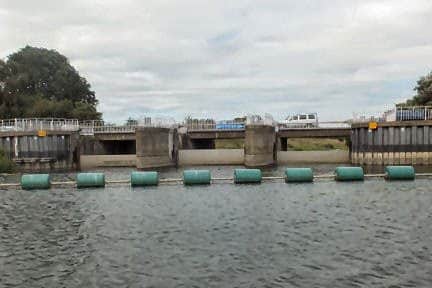 Within half a mile the Earith EA moorings were in sight. The pontoon looked crowded with other boats – the approach needed to be slow. As Cleddau nosed towards the pontoon, Boatwif’s hands full of mooring rope, there was a grey slither and a splash. Right in front of Cleddau’s bow a seal had plunged into the water and submerged. Two hands full of rope, no fingers left for a camera… On Friday morning a shy head bobbed above the water – this is the only photo! 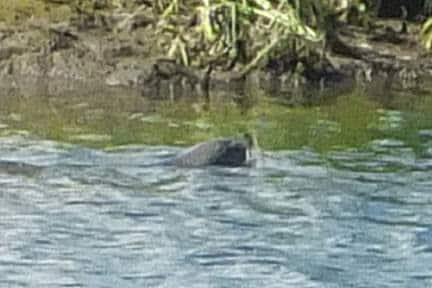 Friday brought sun-sparkled waters but stiff breezes. It was to be a two lock day. First came Brownshill Staunch, an impressive structure. 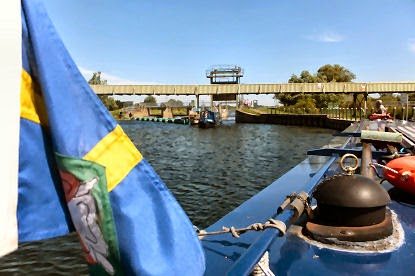 It was a key job: unlock the cabinet at each end and press the buttons in the right order.
Onward, past tree lined banks, a marina now at the Pike and Eel pub, thatched cottages at Holywell, 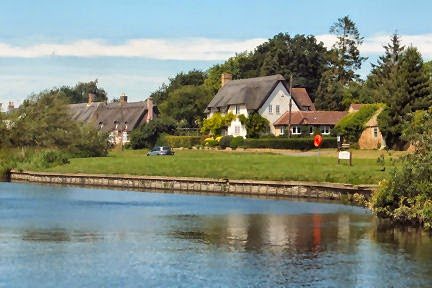 dragonflies darting and dancing low on the water. Ahead loomed a straight structure, a bus travelling on it.

Wasn’t that the recently installed St Ives to Cambridge guided bus route?
First sighting of St Ives is of the tall and graceful spire of the Free Church. 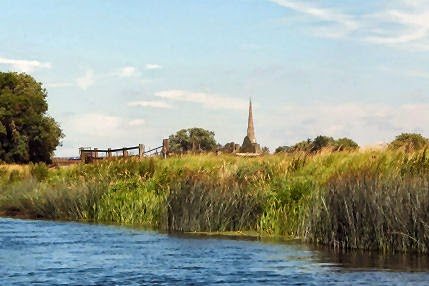 The St Ives lock somehow seems a rather intimidating structure, a lock to the left, a massive weir to the right. 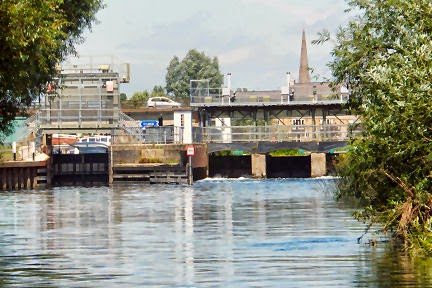 The lock has a strange shaped chamber, electrically operated bottom gates, paddles to be wound on the top gate. Once out of the lock and under the bypass bridge the river is wide, 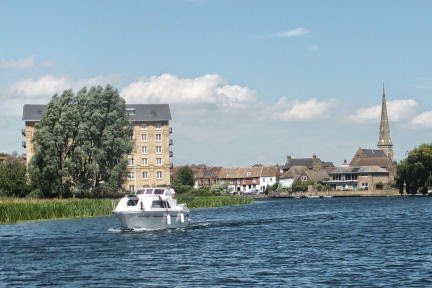 the mill building to the left, the town quay on the right. Mooring up right at the heart of the town proved a challenge – but despite wind, swans and an underwater obstruction a breasted-up arrangement was achieved.
Where better to be than looking at the stunning St Ives Bridge 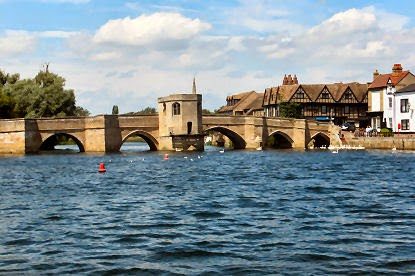 with its iconic chapel jutting out from the centre span? And just yards from the bridge is Surf and Turf, 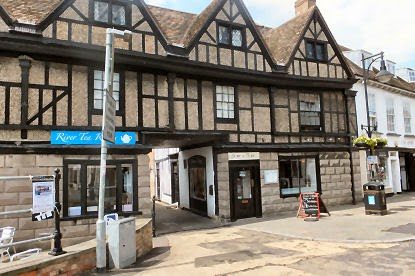 the cause of a Remember When moment. “Remember when we ate there, it was a Greek Cypriot restaurant then, six of us, Cal Son and Cal Mom were there too?”  Later a July 4th email was dispatched westwards to the Cal Clan.
Just back from the riverside stretches St Ives’ long shopping street, accessed from Town Quay by the short but pretty Bridge Street. The Free Church in 1980 underwent a transformation, creating community space at ground level and this beautiful church space, the Centrum, on the first floor.

Outside, just yards away, stands a statue of St Ives’s famous local resident, Oliver Cromwell who lived here for five years in the 1630s. 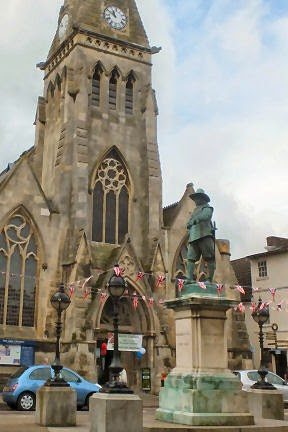 Puritan Cromwell would hardly have approved of the Live Music event at a local pub that blared until well after midnight on Friday. Loud voices drifted down to the boats from the bridge and quay until sleep overcame the boat crews. There was another explosion of noise, before 7am on Saturday –  and the cause this time was vigorous street cleaning vehicles!

May it be quieter tonight at Godmanchester…