“What shall we do tomorrow?” mused the Captain. Before even a single prospect had crystallised in Boatwif’s mind he answered his own question. “Let’s go and see the sea – let’s go to King’s Lynn.”
So that’s why on Saturday the car bowled out beyond Huntingdon, past Warboys and dipped down onto ever so flat Cambridgeshire. The A141 road across the Fens sits on an embankment above the land. There are few hedges, fewer trees but a fair number of wind turbines. The sky is a huge expanse, high above vast sweeps of flat and almost featureless agricultural land. Out we drove, heading north east, past Chatteris and March, over dead straight drains, catching occasional glimpses of wide rivers channelled between seriously steep dykes.
Welcome to Norfolk, Nelson’s County proclaimed a roadside sign. Surprisingly there were orchards, one overgrown, abandoned now, others neatly pruned. Trees became more frequent. Then the outskirts of King’s Lynn was at last reached. The Captain was bewildered, temporarily, by sheer visual overload: the width of the River Great Ouse, the sight of a medieval stone archway to the town, the huge retail parks on either side of the town’s ring road, railway lines… then the way into the town was found.
“To see the sea” was the Captain’s shorthand for seeking out King’s Lynn’s new moorings. A 30 metre floating pontoon was installed last July, so this was an advance recce for a possible boating adventure. Would it, could it, be possible to cross the Wash to Boston after Bedford’s July River Festival?  To boat from North Norfolk over to Lincolnshire? A Wash crossing can be done via Peterborough and Wisbech… but would a King’s Lynn-Boston route be simpler…?
Car parked there was a walk to the water side – through a park, past town defences

to busy streets – and the Custom House

(now a Grade 1 listed building which houses Tourist Information). Here then was the waterfront, a statue of local boy George Vancouver

(a recognisable name, surely) overlooking a small dock and the river frontage.

There had to be a stroll along the river side: here the Great Ouse is distinctly tidal, the water on the ebb during early afternoon. Not far upstream, alongside wonderful buildings, are the newly installed moorings.

The floating pontoon is accessed via a security coded gate and ramp. Water is available and an electricity card can be bought to provide an on board mains supply. The moorings (priced per boat length) are bookable via the Tourist Office (whose personnel explained that the arrangements are based on practice over in Wisbech).

After a wonderful lunch in the cafe at Marriott’s Warehouse

further exploration of this lovely town had to be done. A throbbing amusement fair 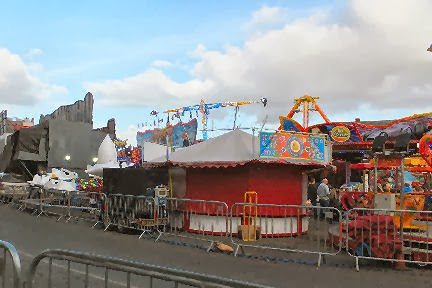 Here, nearly twenty five years ago, we had attended a military memorial service.

Opposite is the striking-looking Trinity Guildhall,

(early 15th century). You creep around these old streets, marvelling at the age

and at the detail in this one-time Hanseatic port.

Mission all but achieved (moorings checked out, but what about the sea?) the next day saw a first visit to Castle Rising, about four miles further north. Here a staggeringly impressive Norman keep

which rise 120 feet above dry moats.

On then to Hunstanton and a sand-blasted, seaweed-churning stroll by the sea. No ‘Kiss me quick’ hat would have stayed perched on a head in the on-shore blasts.  At the end of the esplanade are the famous striped chalk and carrstone cliffs. 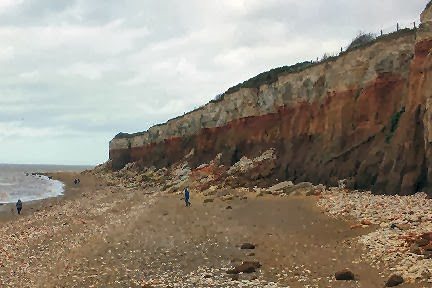 It was busy in Hunstanton on Sunday: dogs were being exercised, cyclists and skateboarders were out in numbers, walkers were well wrapped against the winds while hardy wind surfers skimmed across the waves.

Is this standard turbulence for the Wash, one wondered…

Back home then, via a drive through the Sandringham Estate and a sighting of a Norfolk lavender field.
Objective met: we had seen the sea – but as for “very flat, Norfolk”, Cambridgeshire seems much flatter!
*Caustic lines between Amanda and Elyot in Noel Coward’s Private Lives (1930)