Down to Pembrokeshire for a week of walks and family visits.

What a glorious week.

Pembrokeshire, “Little England Beyond Wales”, takes some reaching. The roads are better now, whether accessed via the M4 motorway, or via the A465, Heads of the Valleys route (much improved in recent years) or along the A40 across mid-Wales via Brecon, Llandovery and Carmarthen.

You cannot be long in South Pembrokeshire without at least glimpsing sea, sand and castles. On a first afternoon Monty, the Midlands-based boat dog of nb Tentatrice, came face to face with the sea.

In blustery conditions wet-suited surfers were braving the brine

while just behind the beach Manorbier Castle, birthplace of Giraldus Cambrensis,   sits on a rocky rise.

“You know the area, you choose accommodation,” the Tentatrice First Mate had suggested some months ago. So no pressure then…  A very comfortable cottage,

dog guests permitted,  was found near Manorbier Castle, which, just as the crow (or seagull flies), is  about five miles from the impressive stronghold that is Pembroke Castle

and about three (seagull flying) miles from Carew Castle.

“Show us the coast, find walks for the dog,” was the brief.

Monty gambolled with other border collies at Amroth,

and on South Beach at   Tenby.

He got feet wet at Angle

and explored the paths beside Bosherston’s Lily Ponds.

It is a spectacular coast. You cannot help but feast your eyes on the movement of the sea,

on the formation of cliffs

on the small world of rock pools,

present only until re-immersed by the returning tide.

Wild as the coastline is, inland the impact of the human hand is clear.  Here stood Stackpole Court  (a huge mansion demolished in 1963), which overlooked this glorious man-made vista.

Move a village, flood a valley

or three (in 1780 and 1860) and create a landscape of your choice! In mid-summer the lilies are abundant here and the wildlife varied and fascinating.

Tenby is probably the best known location in the south of the county. The colourful pastel shades of properties on the Esplanade

attract the eye. Empty of visitors in March it’s possible to sense some of Tenby’s history. Remember Augustus John?

The famous portraitist was born here in a house looking out over South Beach and Caldey Island. Up in the town, nearer North Beach, is this sign. Well, well, Henry Tudor (born in Pembroke Castle)

came to Tenby then!

On a walk around Angle headland (Pembrokeshire’s furthermost south western tip) coastal fortifications are very apparent.  Out in the harbour is Stack Rock Fort; 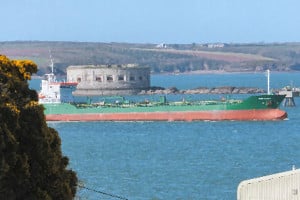 and just off West Angle Bay is Thorn Island Fort.

“So where’s this Cleddau Bridge?” asked the Tentatrice First Mate. “We’ve got to see it, after all your boat is called Cleddau…” It had fallen down during construction in 1970 but now a picnic site nearby offers superb views down the length of Milford Haven.

Memories stirred once more of the Hobbs Point to Neyland Ferry

that used to weave its way across a half mile stretch of tidal water.

Look downstream – it’s 9 miles from the old Royal Dockyard at Pembroke Dock to the open sea. These days large tankers deliver oil and liquid gas to jetties on both sides of the Haven.

For a land-based Boatwif the week provided some satisfying boaty glimpses. There were the lifeboat stations at Tenby

(can you tell that the red-roofed one was the subject of a Grand Designs programme when in 2005 it was converted to a family residence?) and another at Angle. There were boats (and a fishermen’s chapel at Tenby),

boats at the docks in Milford Haven,

moorings at Dale, an empty tanker heading upstream and three sightings of the Irish Ferry (photos taken from Angle headland, south of the Haven; from Dale, north of the Haven and berthed at Pembroke Dock, as seen from the Cleddau Bridge).

How can an area, a peninsula far out west, have such an emotional hold on the soul? “The land is the right shape,” the Captain will always say. But there’s more than that: it’s where land and sea meet, where trees are shaped by the westerly winds, where skies and clouds are an ever-changing tapestry, where space and light enchant and where castles and forts are constant reminders of the past…