In heavy rain the Captain had cast off from the towpath just south of Astley Green and continued north along the Bridgewater Canal. It’s not easy to describe a landscape when it is viewed from under a rain hat and an umbrella – the canal is wide, with towpaths or footpaths on both sides. Often the land either side is lower than the canal, the result of subsidence. On a wet morning it was only the dog walkers, waterproofed from head to foot, who provided a towpath presence.

Cleddau approached Leigh. “This is where you can go shopping and where we can use the services,” advised the Captain. A small brick building, a sanitary station just before a bridge, was spotted. Access to the street from the site was not easy: a step up on a beer barrel and a bunk up over a wall seemed an unorthodox way to hit the shops.

Top of the not very long shopping list was – a pencil sharpener. There might be nearly a dozen pencils on the boat but all seemed blunt. Try looking for a pencil sharpener on the most rundown depressed street in the north. Even where shops were still open (The question “Excuse me, do you sell newspapers?” gained the response: “Not until the 17th…”) there was nothing to buy.

TESCO was recommended, time after time, only about another ten minutes walk said the man in shop 2…and the woman in shop 4 and then another passer-by… So it was onward, keeping to the dreary street where the majority of businesses had died, to where at last there was a vast TESCO EXTRA. (Had its sheer size suffocated all other commercial activity…?) In this huge store, success, there was ONE pencil sharpener, plus some carrots plus three other items, which then had to be carted the mile back down the dreary, damp street to the boat.

Onward then, past mills

Pennington Flash is often recommended as a good mooring spot.

The country park is on the western side of the canal, the flash (lake) lower than the canal. Its heritage is marked by names on these stop planks

and, a bit further along, a strong sculptural shape created from old lock gates.

Now the canal was in lift bridge land,

the first of 8 between Pennington and Handcocks, (the swing bridge at Aintree under C&RT’s jurisdiction). Mostly they are operated by a C&RT key which operates traffic lights, barriers and the swing or lift operation.

Onward, through more territory showing signs of an industrial past,

The name of Wigan can strike fear and trepidation into the souls both of boaters and of visitors. Two locks (Poolstock Locks) take the canal up to a junction (to the left) with the Liverpool line.

Bear right here to face the Wigan Flight of 21 locks which lifts the waterway towards the Pennines. If this is what locking in the proper north is like (Poolstock Bottom Lock)

… there is a lot of physical work ahead!

Wigan of course, is immortalised in George Orwell’s book of 1937, The Road to Wigan Pier . Efforts have been made in recent years to regenerate the Wigan Pier Quarter but beyond trendy pubs

and visitor information (words embedded in the steps)

the old wharves are reminders that this is where a huge tonnage of coal used to be transhipped from coal wagon to barge.

(This is Wigan Pier.)

Inside a huge stadium there were glimpses of rugby posts:

this is the home ground of professional rugby league team Wigan Warriors (as well as the Wigan Athletics FC). As if to reinforce that Cleddau and crew were in foreign parts two boats of unfamiliar shape approached.

These boats, about 55 feet in length and possibly 14 feet in width, were obviously old working boats, though in private hands now.

“The Douglas Valley is lovely,” oncoming boaters in Wigan had advised. How right they were: it’s a serene landscape, enjoyed by walkers and boaters alike.

blossom drifted from the trees and the village of Parbold enchanted. The windmill and adjoining cottage houses

the studio and exhibition space of a local artist James Bartholomew,

the trains run to Southport on the coast and inland to Manchester,

the hills rise gently to the south and the local shops are excellent for grocery restocks.

By Friday the land either side of the canal had become flatter – this is market gardening country.

A local farmer, walking his dog, explained that now his son grows carrots hereabouts – and also on land further south towards Manchester.

– this is Lathom Junction which links to the Rufford Branch.

Go down here (8 locks) and you get to Tarleston, to join the Ribble Link and a tideway crossing to the Lancaster Canal.

a beautifully refurbished mill at Burscough, 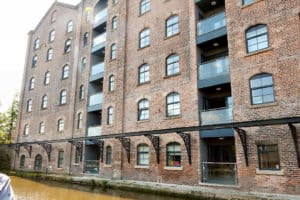 a wharf transformed into an Arts Centre, 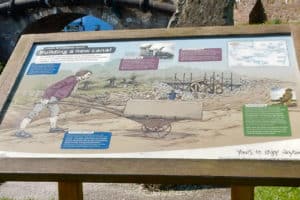 – this is a canal that is well worth visiting. Locals and boaters have all  been positive and friendly: there is much encouragement to head on down to Liverpool as there’s so much there to see…

Distance covered so far from Poynton to Liverpool: 122.8 miles, 59 locks

(Monkton Moment*- a reference to / recognition of Cleddau’s Pembrokeshire connections