Where to? And where next…?

There was time to squeeze in one last little boat trip before the Cal Clan flew back to the US.

But where to? From Ely, heading north, it’s a lock-free 16 mile straight wide trip out to Denver. A return to Pope’s Corner (south bound) could lead to a trip along the green weed-choked Old West River – or there was the river route from Pope’s Corner towards Cambridge. The latter option won the day, after all there are two locks on the Cam.

The boat was still moored at the marina in Ely. On a hot afternoon Boatwif offered the Guys an ice-cream from the van that is parked each day outside the Antiques Centre.

It would be a roundabout route to get there, a sort of circular tour of the city… First, there was a walk over the bridge from the marina, along the riverside to check out The Grand Central American diner for a future occasion.

Then there was the walk across Jubilee Park, up the hill through Ely Park,

climbing towards the Cathedral,

seeking a cut through to the front of the immense ‘Ship of the Fens’.

But the way ahead came to an end, a short lane surrounded by a cluster of ancient monastic buildings. One was a chapel, the door locked.

Beside it was a door ajar, a spiral stone staircase leading up from it. Cal Guy Snr was keen to explore.

In minutes he reappeared. “Come on up,” he beckoned. The staircase led to a gallery overlooking a small chapel. There was a murmur of voices from the chapel below, then a ripple of applause as a tour group audience showed their appreciation to their guide.

“Phew!” he exclaimed. “This was built in 1321.” For a child born and brought up in young California  (incorporated into the United States as recently as 1850) this was seriously old!

The building is Prior Crauden’s Chapel and access can be arranged.

Steps were retraced and the Cathedral South Door loomed ahead.  Again, Cal Guy Snr was keen to explore. Pure choral sound swirled through the building, then it came to an abrupt stop. A conductor’s voice was heard from the Choir stalls – a rehearsal was in progress. It’s summer time, the school choristers are on holiday and visiting choirs perform at choral services. This choir was the Cathedral Singers of Ontario, Canada, preparing for Evensong.

There is a famed Stained Glass Museum at Ely Cathedral / and at the Great East Window Cal Guy Snr paused and related a tale of visiting an abandoned Catholic Church in the foothills behind Escondido.

The walk round the cathedral continued – down the nave, stopping to gaze up into the spectacular Octagon Lantern Tower and at the highly decorated ceiling of the nave.

This was a truly impressive building to show the Californians…

Along the High Street, a diversion to a pharmacy, some supermarket items, then down the hill back to the riverside. It was late afternoon – more early evening, but joy of joys, the ice-cream van was still in position – and still in business… The promised ice-creams were bought – with one acquired for Grampy /the Captain too!

The illuminated Octagon from the marina was somehow more rewarding that night – having been seen now from the inside.

On Sunday morning Cleddau was untied and manoeuvred out of the marina back onto the River Great Ouse.

Through Ely she went

– and then Cal Guy Snr assumed control of the tiller.

Under a bridge, the river straight and wide now.

There was a narrowboat ahead, was it about to pull in at the GOBA moorings? 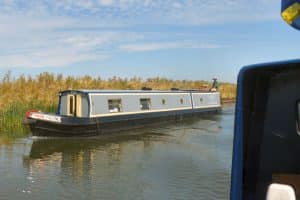 (Oh! It was Jubilee, heading for St Neots and on to Bedford…)

It was straight ahead at Pope’s Corner

– and a second visit to the River Cam.

On a hot Sunday canoeists

and swimmers enjoyed the water while on the shore folk sought shade under the trees – and one boater strummed a guitar.

the previous weekend. Getting onto the Bottisham Lock landing took a while, but eventually a large cruiser plus a smaller one emerged from the lock allowing other boats to go up.

Evidence of the storm was still on the lock side, the fallen tree trunk and branches now taped off.

Above the lock sailors sailed and paddle boarders paddled… 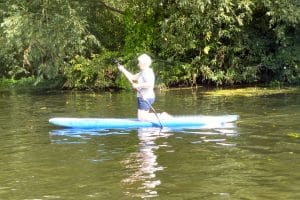 Remember the expression that you wait all day for a bus – and then three come along together? Back in the Bedfordshire neighbourhood two days earlier the Captain and Cal Guy Snr had comforted and kept company with an elderly man who had fallen badly outside his home. It was a two hour wait for an ambulance. “He’s Russian,” was the word of those first on the scene.  Not so, it transpired that he was Latvian… And it was while tied up at Clayhithe later that afternoon that local swimmers arrived on the scene, aided by their very own step ladder for getting in and out of the water.

“He is very good swimmer,” said the woman, pointing at the older man. 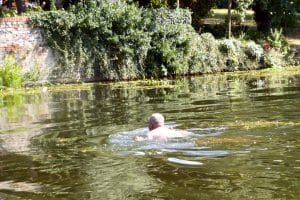 “He was a diver in the Russian navy, but we are from Latvia. Latvia,” she reiterated. “Come and join us,” she begged. “It is so good.”

Another pair of swimmers arrived, Latvians too. So, not three buses all at once, but six Latvians in two different counties!

and headed back towards Ely.

It was a Monday, the pub crowds and picnickers had gone

but in the still intense heat cows had found shade under a road  bridge.

One day, perhaps, Boatwif will walk along the eastern flood bank and try out this giant Ely Cathedral view seat for size…

Under the Ely Southern Bypass,

cruising past the waterfront,

out beyond the University Boathouse,

to wind round (Cal Guy Snr managing the turn) and then return to the marina mooring.

Where next? The Cal Clan have flown home and Cleddau needs to head back to Cheshire.

A summer punctuated by dates and deadlines drifts now into a slow autumn cruise back to home moorings.  Access to the upper level of the Macclesfield Canal is impossible at present: the Marple Locks from the Manchester end are closed (again) due to structural failure and the Bosley Locks to the south are closed due to water shortages. There are restricted operating times at the Northampton Locks up from the River Nene and also at Hillmorton on the North Oxford Canal. The Captain is muttering about a Wisbech to Boston option, entailing another Wash crossing.  So just to delay things until rains have (hopefully) improved water levels in the canals there are further tributaries from the Ouse to be explored – the Little Ouse, the River Wissey and the Relief Channel that passes Downham Market.