Where was the Wrekin?

The canal breach at Middlewich has forced Cleddau and crew to make a long detour via the Shropshire Union Canal. To go a long way west to then turn north east in order to go south – such is the start to this year’s watery wanderings…

After travelling the Shropshire Union just twice before, once in each direction, the Cleddau crew were soon reminded of its particular features. The water comes downhill all the way from Wolverhampton to Ellesmere Port, there are long wide and dead straight sections,

there are deep atmospheric cuttings, there are long impressive embankments and, after the 15 locks at Audlem, there are two lock flights, each of five locks – plus single locks at Wheaton Aston and at Autherley Junction at the southerly end.

There is a time pressure on this phase of the cruise (more on that another time) so regardless of weather (cold, dank, windy, drizzle) it was onward on Wednesday, with first a climb up the Adderley Locks.

but with a boat ahead further up the flight water depths were constantly changing. Somehow there was a long struggle at the third lock when the boat swung onto the weir wall of the by-wash, the water level dropped and the boat refused to be dislodged. Straining arms on the mid-rope and the long shaft at the bow eventually solved that problem.

Onward, through Market Drayton (Ooh, wedding hats here and a market under way) 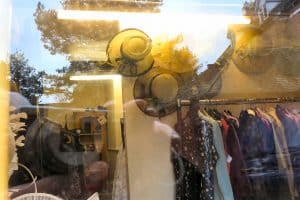 and out the other side of the town to the next lock flight.

Tyrley Locks often receive a mention – perhaps they are not for the faint-hearted. There’s the very narrow approach to the bottom lock: thankfully a boater just emerging from the bottom backed up to a passing place 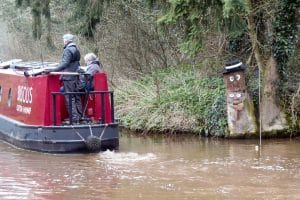 (a reminder of how one drives on Scottish roads) and Cleddau slid onwards through the rock-lined cutting.

If Audlem and Addersley Locks offered surfing and whitewater rafting experiences at Tyrley the helm had to negotiate one or two or even three walls of water to gain entry into each lock chamber.

It was at Lock 3 that calamity seemed to occur: full forward throttle, full reverse throttle, full forward throttle, a fast lock entry and a slamming back into reverse. The clanging and clattering caused by the impact with the lock wall was loud and extended. The Captain looked ashen, Boatwif felt ashen and a watching lock wielder from a down-coming boat muttered gravely about forewarning her husband… Slowly the boat rose in the chamber. As the gunwale reached level with the lock sides the Captain offered to do an internal inspection. He was out of sight for what seemed an age. Had glassware cascaded from the upper galley cupboard into smithereens? Had the TV smashed to the floor?

“Nothing,” he said, on emerging back onto the stern deck, “except for a jar of nutmeg…”  This had spilled its contents into a neat conical shape onto the work top.

So what had caused the cacophony of sound? Slowly the truth dawned: as part of the recent Boat Safety Certificate examination heavy chains had been draped onto the gas bottles in the bow gas locker.

Finally up at the Top Lock another boater divulged some advice: local custom, apparently, when going up Tyrley Locks, is to open the bottom gates and raise a top gate paddle to bring water through the lock, the effect being to even out the cross currents…

Plug onwards: from Goldstone Wharf (Wednesday night’s mooring) there were still 23 miles to go. There were classic sights – the Cadbury Wharf at Knighton,

the church at High Offley, 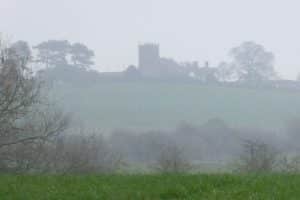 a peal of bells being rung on a Thursday morning although the murky conditions prevented a good view of the tower, the Anchor Inn,

the bridge over Grub Street Cutting,

and  the 81 yard long Cowley Tunnel.

Somewhere in a guide book there is a hymn of praise for views of the Wrekin. She (the Wrekin, that is) was sadly absent, invisible, just not there. Grey clag blanketed any and everything within a half mile or so of the canal. This April cruise up the Shropshire Union has seemed a vacuous cruise, a cruise through places not visible or places not accessible… Were the Cleddau crew too lily-livered to jump ashore at the pretty village of Brewood (pronounced Brood)? The quagmires, the quick sands, the gloop pools were strong deterrents

to the casual visitor – just a backward glance at the pretty church tower had to suffice.

At 1255 on Friday the rain hesitated – and ceased.

(and still it was not raining!)

Could there possibly be further onward cruising in non-deluge conditions…?

on the Staffs and Worcs Canal. It’s 39 miles and 12 locks between Audlem Top Lock (Tuesday afternoon) and Gailey (Friday afternoon). For the record, for only three of the cruising hours was it not raining!

Please pass at tickover or my wife will turn you into a frog.