The last post ended with: There was no Civil War on board Cleddau on Thursday night – but an emergency had the crew out of bed well before dawn. So what happened?

At 0415 Boatwif became aware of a voice from very far away, speaking to her insistently. “We’re badly aground. Wake up in case we have to get off…” It was still pitch black and the Captain had woken, aware that his feet were way up above the level of his head. Outside on the towpath was the Australian chap from the hire boat ahead, awake because he’d rolled right out of bed.  There was rope slackening and hull pushing but to no avail, both boats remained at a very acute angle. The chaps bonded, exchanging opinions and anecdotes… Properly awake now, and it being an emergency, the appropriate thing to do of course was to make a pot of tea…

The 24 hour C&RT contact line was rung – and the water pumps at the lock behind resumed action.

Rope slackening; rope tightening; bow pushing; stern rocking; the efforts continued in the pale hours to release the boats from the mud…

As the water level rose gradually the boats assumed a less acute angle.

It was a lovely dawn, the birdsong sweet and the city began to stir.

At 0530 it seemed sensible to write another birthday email to Cal Son, after all it was still very much Thursday 11th where he was, although it was early morning on Friday 12th where Cleddau and crew were awake, though stuck.

About four hours on the Captain pronounced the boat afloat and safely tied up.  Hadn’t a C&RT volunteer the previous day muttered something about water levels being a problem. Did this bode badly for the gathering of boats at the Worcester Canal Festival a mile or so further up the canal?

By mid-morning Cleddau had reached the festival site at Lansdowne Park where marquees and tents were being set up. 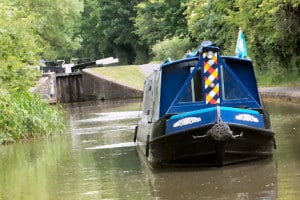 Off Boatwif went to lend a hand  – and in exchange the Tentatrice First Mate was lock hand for Cleddau when she cruised further along, three locks up, to turn with difficulty

and then head three locks back again so as to be pointing south on Monday morning. (Scroll down here to see photos of Cleddau heading into the jungle…)

Constant heavy rain is not a welcome companion at an outdoor summer event. Regardless, on Saturday morning, the Captain festooned Cleddau with flags and bunting… 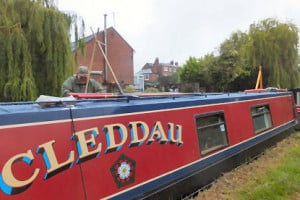 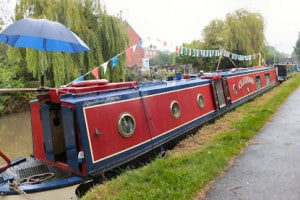 recognised the achievement of a local resident in caring for her local environment by the dedication of a bench crafted from green oak sourced from the Wyre Forest.

Alongside the towpath were boats to be boarded (the Dudley Canal Trust boat used as a floating classroom, a 6 berth ABC hire boat) while on site canal crafts were demonstrated

and items sold. Over the next two days, in improving weather, children bounced and slid, dancers danced, 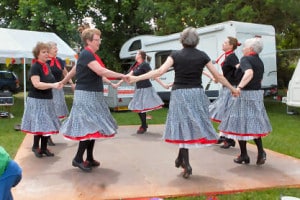 musicians strummed and sung (this was Collective 43 making a very fine sound),

By 7pm on Sunday the crowds had gone and the tentage was being struck.

The Worcester-Birmingham Canal’s 200th birthday had been well remembered

(even if the only birthday cake visible was the one for the Tentatrice Captain).

So, Worcester Canal Festival attended, Phase 1 of the 2015 Cruise has been achieved.

Next – back to the River Severn and downstream to Gloucester…

Monkton Moments* to date: 5 (A knock on the boat by a Tenby-born passerby at Lansdowne Park led to a most marvellous Monkton Moment…)