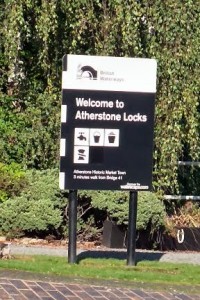 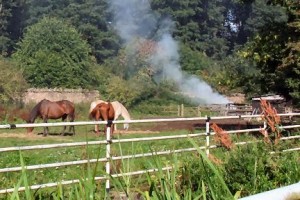 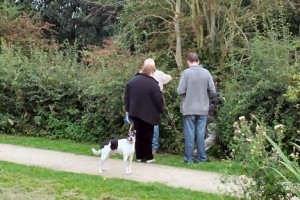 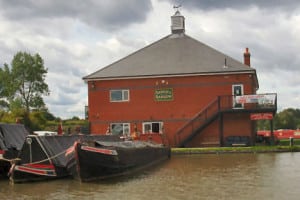 Saturday 28th August:  2 miles south of Atherstone, Warks to 1 mile south of Hopwas, Staffs: 14.8 miles, 13 locks
Greetings from one back deck to another is common on the canals. The Captain here tends to address a  brisk “Good morning” to oncoming walkers and boaters and usually it is returned with similar reply, even if delivered in a milder manner. But now we are in the country where such words might be too, dare I say it, posh, by far: as we passed through Fazeley, which is west of Tamworth, distinctly in Staffordshire, the greetings to us were all of the “How you doing? Alright?”  and “You alright?” variety, each said with warmth, as if we were personal friends!
There have been moments today when being alright has not been the case: the tripping over feet and gaining a cut knee being one, the absolute deluge as we arrived at the Glascote pair of locks being another, the fast movement of a boat which dislodged our moored boat, throwing ropes and mooring pins into the water a third. But generally it has been a brisk and breezy sort of day.
Keen to be ahead of holiday queues at the lock flight the Captain had the engine roaring into life early – again.   He tells me now that both sun and moon were visible then. Breakfasts occur in shifts and when I took the helm the sun was bright, glinting optimistically on the water. At Atherstone Top Lock (of eleven) there occurred a typical example of instant camaraderie. Two Americans had flown in from Oregon, sailors, but had yet to work a lock. In five brief minutes she had covered the canals of New England, mills, a school song about the canal at Lake Eyrie, canals at Disneyland, jetlag, Welsh ancestors – and finished with the observation ” My, you have such small feet!” Further down the man in the partly pink boat  (returning from Llangollen now, Middle Level last summer) let fly his views on unnecessarily long boats, claiming he had all that was needed in his thirty five feet, and that he was a Grumpy Old Man.  His wife maintained a total silence, apart from a pleasant “Thank you” as they moved on past us. Later there was the sparkling, brand new boat, not a speck of dirt on any fenders. But it was four years old, a shell on which the husband had developed and lavished electrical and carpentry skills. One weekend outing previously – this was the start of their first three week cruise.
For boaters the Atherstone Flight is a positive delight: some locks are  within very easy walking distance, others spread apart so there is time for a cruise between. Despite being so close to the town it has a very rural feel, views of hay being turned, of maize, of a buzzard soaring above, of butterflies close by.  After Atherstone the countryside is quiet, disturbed occasionally by the sound of trains. At Polesworth and beyond spoil heaps are now well disguised by trees and undergrowth but there is a sign referring to its mining past. Then unusual peace and tranquiilty prevailed at Alvecote Hire Basin, normally a bustling place to be negotiated past with care.
Time then to consider towpath usage. Seen in one short stretch: dog walking, blackberrying (“Blackberry and apple pie my love, see there’s the apples there,” pointing to an apple tree), newspaper reading, texting, running, BBQing and two men trundling a supermarket trolley containing a large cardboard box …
We came to Tamsworth, the first house passed the one with the East German border post in its garden. What an array of items to be seen behind the houses, seats and garden sheds you’d expect, add in stone toadstools, cherubs, fake ducks and rabbits, drainpipes, gazebos, trampolines, chickens (real), summerhouses and a coalburning stove being used as a plant stand. There was one more rabbit, floating alas, and very dead.
From Fazeley Junction the cruise became a crawl, following one one-speed only boat past lines of tied-up craft. Relief then to tie up ourselves, in the wind, in the countryside – even if we had to tie up all again (after which the Captain added more pins and ropes!)
Tomorrow? Off the Birmingham and Fazeley Canal, onto the Trent and Mersey and at least to Rugeley…