A cruise to a party…

Those who know him well recognise that the Captain is a Planner: give him a project to develop or routes for a long-distance cruise to coordinate and he is a happy chap…

2017 has seen various plans conceived and executed: the cruise of 433 miles and 235 locks from mid-March to late June, the Nearly 70 family gathering and celebratory party in South Pembrokeshire in July, as well as several shorter distance Cleddau exploits 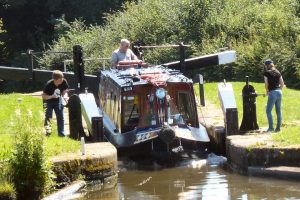 – but in mid-September one project still remained.

“Why not have a birthday cruise for our Bedford friends next year?” the Captain had mused last Autumn. Cleddau, now moored in the north west, did once carry 15 one-time Boy Scouts (* See details below) – but the Captain was thinking of greater numbers and of a local waterway…

Two hundred years ago a canal route from the Grand Junction Canal near Milton Keynes and the river Great Ouse at Bedford was proposed. But progress (the construction of a railway) overtook the scheme and the idea fell dormant until 1994. Now the Bedford and Milton Keynes Waterway Trust promotes the vision of connecting the mainline Grand Union Canal with the fenland waterways. Since 2012 the B&MK Trust has run the John Bunyan,

a community trip boat, along the Great Ouse river.

And so it came to pass, a birthday cruise downstream from Bedford to Willington and Danish Camp

(crucial stats, 5 miles,  2 locks). It was the day before the Captain’s decade-changer, but near enough to count as a birthday treat…

“Be there for 3.50pm,” were the instructions. The “there” is Priory Marina in Bedford, where John Bunyan is moored. 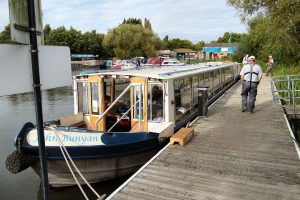 “Just preparing the boat for you,” said the purser, as cream teas were being laid out and the jazz trio were setting up their kit. 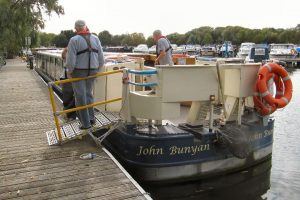 Keen not to miss the boat (!) friends and neighbours, colleagues from the past and a Cheshire contingent 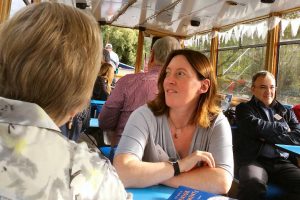 were prompt, ready for a 4pm departure. 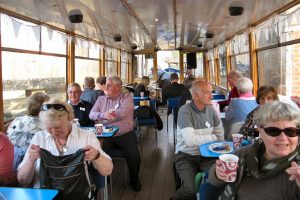 In gentle sun the boat motored smoothly from marina to river. 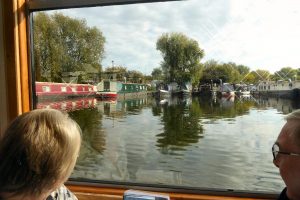 The jazz trio struck up, smooth music for smooth movement. 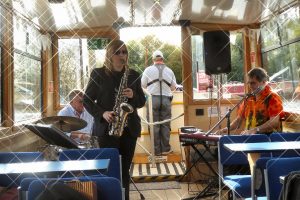 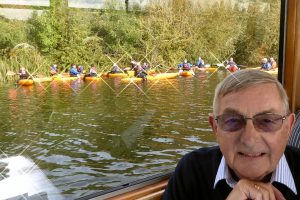 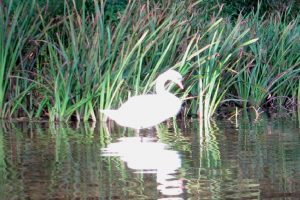 Offside at the Barns Hotel a bride was posing for wedding photographs. 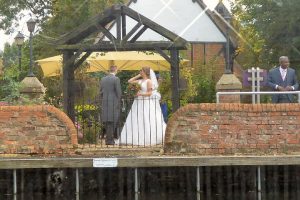 “This is so, so (pausing momentarily to choose her word) civilised,” commented one passenger.

As the jazz trio continued 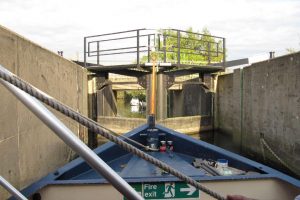 Deck crew dealt with operating the guillotine gate at one end and the lock gates at the other; smoothly the boat joined the lower level and continued along the river. “Cardington sheds aren’t that far away,” Boatwif explained to an aero-engineer guest. “Site of the Airlander…”   High river banks, however, prevented a sighting of either the airship sheds or of the Airlander itself.

The cream teas were served.

“This is just so civilised,” said an appreciative passenger, that c  word again!

Onward, down through the long and deep Castle Mill Lock,

glancing back at the overspill thundering over the weir. 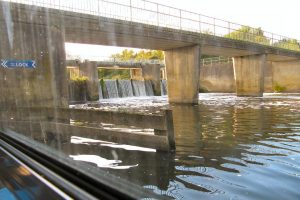 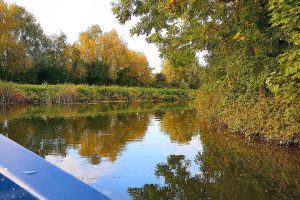 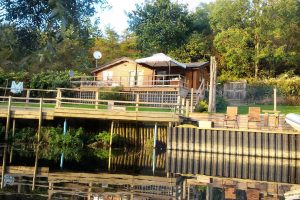 Walkers waved from a riverside path and Danish Camp hove into view. A further half mile the John Bunyan cruised before turning above Willington Lock and returning to Danish Camp to off-load the passengers.

Party venue reached, the party proper could begin: there were the ever so slightly embarrassing Seven Ages of photographs to peruse, 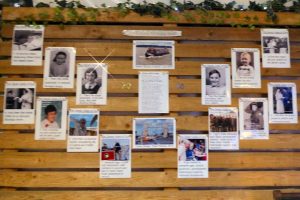 drinks to imbibe, food to choose, 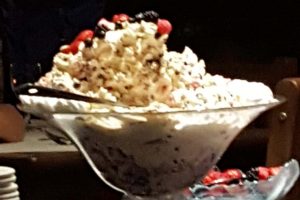 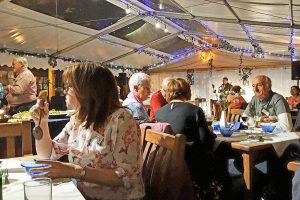 conversations to have, an entertainer to watch, dancing to do…

“Well, we cruised and we boozed…” a friend summarised the next day. But then, as a message from a mathematically inclined friend declared on her card, this celebration was for a happy 140th birthday !

Boatwif apologises here for the slow publication of this post and for some of the photos being ‘star-spangled’ (technical incompetence with camera). Further coverage of this event (with far better photographs and descriptions) is outlined by Jennie here and by Jaq here.

*15 Veteran Scouts, out for a walk east of Thatcham on the Kennet and Avon, cut off by some towpath works, circa 1998.