A little bit of a triumph

That was the word a stranger addressed across a lock the other evening. Boatwif was “gongoozling” at Hurleston Junction locks, the 4 locks that lead off the Shropshire Union Canal up onto the Llangollen Canal. Cleddau was moored nearby, on the main line, but a short stroll brought her to the base of the locks. There was a queue as three boats were gradually making their way up. Between the first and second lock there was a gentle chuffing sound, smoke exhaust puffing from a tall chimney and shouts of encouragement.

A large old workboat seemed to be stationary in the entrance to lock 2. Slowly it was nudged forwards, aided by two burly chaps at the stern pushing at the walls and the gate.

The boat made it in. The back gate was closed. Someone shinned up the ladder, windlass in hand. And that’s when he said it: “Triumph!” A story emerged, the old boat had never ever before managed to get into that particular lock chamber – but the syndicate of owners had “rebuilt the boat, re-bent the planks,” he said, so that she was narrower by an inch or so – and thus able to proceed up the locks. The boat was based at Leigh on the Bridgewater Canal. The owners had been students together but now younger boat enthusiasts were in on the project, and weren’t those involved at the lock just jubilant with success…

On a much smaller scale the Cleddau crew are feeling a sense of triumph. For the first time they have cruised the 42 miles of the Shropshire Union Canal from Autherley Junction to Barbridge Junction and across the Middlewich Arm without resorting to waterproof layers and gaiters and without getting footwear and lower legs encased in mud! (There was a long hour above Adderley Locks spent prising dog mess of a pair of boots but that’s another issue…)

Some years ago Cleddau made the trip to the far northern end of the Shropshire Union Canal. It’s at Ellesmere Port, beyond Chester. The National  Waterways Museum is there and the canal terminus connects to the Manchester Ship Canal.

A visitor looking at the last two locks leading down to the Ship Canal level asked a direct question of the C&RT lock keeper.

“So where does all the water come from?”

“From Wolverhampton,” he said, dryly. “That way, about a hundred mile away.” It was a startling message that emphasised both water supply and contour levels. Yes, heading north, it’s downhill all the way on the Shropshire Union! (For stats fans, it’s a drop of 300 feet between Autherley Junction and the Manchester Ship Canal).

Between Autherley and Norbury Junction there had been a minimum drop stop lock and a single lock at Wheaton Aston. It is as the canal approaches Market Drayton (population 12,100)  that the canal drops via 5 locks at Tyrley. A feature of the Shroppie locks is the by-wash,

the surplus water that spills down from beside a lock into the pound below. When running fast a by-wash can kick a boat off course

(remember this, the case of the chains in the gas locker…) Going downhill is easier than proceeding up, but with the canal so busy with other boaters during this trip towpath consternation levels were high.

“Is it true that there’s a problem with these locks?” one apprehensive boater asked.

“We’ve heard a rumour…” another began.

So, five locks were completed at Tyrley, south of Market Drayton.

Then, after a late start from the top of the 5 lock Adderley flight (and just look at what was required to moor against the Shroppie shelf), 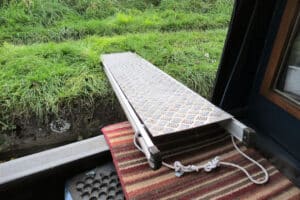 there was a queue of boats ahead. Going down took a while…

Three miles further on at the top of the Audlem flight (15 locks in total) the timing needed to be right. Cheshire Mum had declared that Techno Son-in-Law would be reporting for lock duty on Friday morning. He appeared as Cleddau was entering the third lock down – and his long legs and efficiency contributed to a fast descent.

On Saturday there were two more locks to descend, those at Hack Green. There had been tales of long delays but the top lock was filled and gates left open by a previous boater. Magic! At the second lock, however, the water refused to balance and the top gate couldn’t be opened. Twenty minutes into the struggle a duty C&RT worker arrived

with keb and windlass, responding to phone reports. (A paddle on the offside lower gate would not seal). Heave, heave. Finally, the lock could be worked through and onward Cleddau went, passing a boat-packed Nantwich to moor before Hurleston Junction.

The Shropshire Union is famed for its long straight embankments – and also for its deep tree-lined cuttings. No report would be complete without a couple of photos like these…

Typical also are metal plates on bridge corners showing grooves created by the harnesses of the towing horses.

Fine weather and a grabbing of an enjoyable waterway break has made folk even more inclined to start conversation than usual. For three days Cleddau leap-frogged past a small liveaboard cruiser towing an open dinghy. Frequently the topic of solar panels and the electricity produced was brought up.

Cleddau’s engine is quiet (aided by a hospital emergency generator standard silencer). “Is your boat run on electric?” someone asked.

“Didn’t hear you coming,” said another.

Then there are the “How do you say your name?” and “What does Cleddau mean?” range of questions.

The rose decoration puzzles many: “Is it Yorkist or Lancastrian?” a towpath walker asked at Audlem Bottom Lock. “Neither,” was the reply. “It’s a Tudor rose…”

The Shroppie has left a very positive impression this time – quaint

Off the canal, at a market stall in Market Drayton these were for sale: in mask-wearing 2020 the mugs were a jolt from a long ago past… 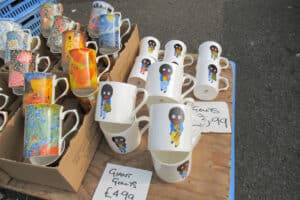 The Middlewich Arm was joined at Barbridge Junction, 9½ miles and 3 locks cruised of it during glorious Sunday sunshine. There’s one more down lock to do before a corner is turned and the haul up the Cheshire Locks begins.

(Finally, two photos of a very particular field for Pip and Tilly of nb Oleanna