A Serious Dose of Hiraeth

How fortunate we are to be living in times when scientists have developed Covid vaccines and in a health system where vaccinations are administered free and according to priority.

So, jabbed as above, off to Cleddau-land went the Cleddau crew, set to enjoy family gatherings (more later) and favourite views (more on that later too).

Both the media and the wider population are alert (and sometimes averse) to vaccinations. As the Cleddau crew returned to their childhood homes both were aware of how they had benefited from experimental medicine.

Boatwif: My older sister was about 7 and I was about 3 when we both caught whooping cough. Our mother used to shudder and say something about “remembering the coughing at a Christmas Eve Carol Service”. My older sister (Senior Sis, to readers of this blog) duly recovered, though I apparently took much longer to regain health and strength. (Did doctors in those days use phrases like ‘failure to thrive’?)

There was concern, a lot of it. There were frequent visits to nurses and doctors who would wield a cold stethoscope over my chest. There were X-rays. There were visits to the local hospital, and one, possibly two trips, to see a specialist at a Swansea hospital, some 60 miles away. My father took me, and we went to Singleton Park and fed bananas to monkeys in a cage… Such are the memories of a five year old.

The hospital clinic visits continued. And then the talk was of going to stay in a hospital. It was one called St Brides. I’d have to sleep there. I had a new nightdress and a new toothbrush ready for it. I could take my favourite little blue teddy with me. He was a present from an uncle.

BUT – the hospitalisation never happened. The five-year-old did not become an in-patient at a TB sanatorium. Modern (mid-1950s) experimental medicine intervened. I was given a BCG vaccination, regarded as experimental then – and over time, and with frequent chest checks, I was closely monitored. The hospitalisation didn’t happen (a near escape it seems, since there are records of children in the fifties spending many months or even years incarcerated in isolation hospitals. Listen to this: Ann Shaw recalling her 4 years and a day incarcerated at a TB hospital in mid Wales ). How differently life might have turned out for a little Pembroke girl had she been an in-patient at the Kensington Hospital at St Brides on the west facing coast… (Here is the hospital, photographed first during the 2007 Pembrokeshire Coast Path Walk and then in October 2021.) 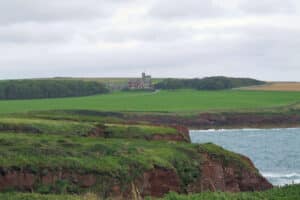 Throughout primary and secondary school years there were annual checks from the school doctor. At about age 14 BCG vaccinations were given to school pupils. There was a prick test the week before – and my arm showed a positive reaction. The early administration of the BCG vaccination seems to have kept me out of a long-stay sanitorium and protected my lungs … Though never particularly sporty I went on to live a healthy life, thanks, it would seem, to a vaccine offered years ahead of the usual administration time…

The Captain’s story: In 1951, aged four, I crashed my trike and ended up with severe grazing and cuts to my left arm. Even though the gravel was cleaned out and every precaution taken the arm became infected. None of the drugs and treatments worked and my parents were being prepared that their 4-year-old may lose his left arm.

Our young doctor knew about this incredibly effective drug – penicillin. Although released for civilian use it was in very short supply, but it had been used by the military and there was a Royal Navy Hospital in our town. Penicillin was acquired and my parents signed documents allowing it to be administered.

I still have memories of the 12 vaccinations in my bottom and a vivid picture memory of the nursing sister in her starched formal uniform who administered them. The penicillin worked. How different my life would have been without that experimental vaccine – I played rugby for the county, judo for my university and had the career I always dreamed of – flying in the Royal Air Force. 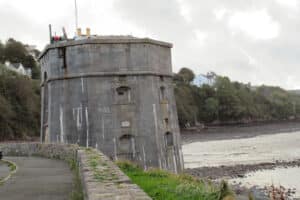 So, Pembrokeshire in October … just because it was October didn’t mean that the beaches were off limits. First trip was to Freshwater West, where, with reference to Dylan Thomas’s ‘fishing-boat bobbing sea’, the boat café on wheels supplied a fresh fish brioche lunch… 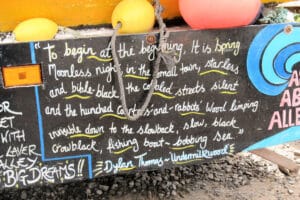 And here was a first ever meeting with Toddler Huw, Bristol Niece’s son. 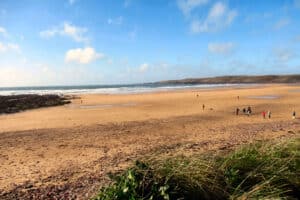 the distant St Ann’s Head. Not the same was a pebbly area exposed by storm-shifted sands,

the transient effect of sun and cloud on tide-washed sand 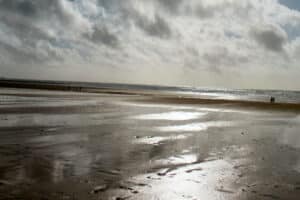 and the salt spray mist obscuring the view of Linney Head… 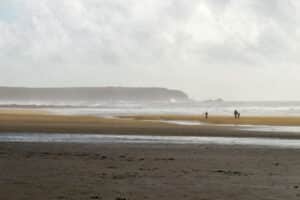 – a sheltered cove on the southern side of the wide Milford Haven Waterway. Mid-afternoon the Irish Ferry was heading away from its Pembroke Dock berth to Rosslare.

Blue Star 1, a ten deck Ro-Ro/Passenger ferry with a capacity of 640 vehicles and 1600 passengers, is currently on charter from a Greek shipping company 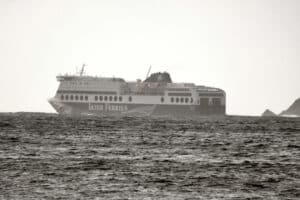 Blue Star 1 at her berth, as seen from Hobbs Point. 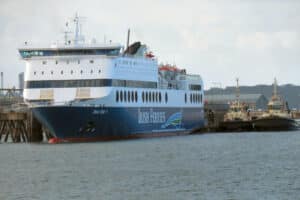 (Looks like there’s been a recent facelift here of the pierhead railings, bollard and bins…) 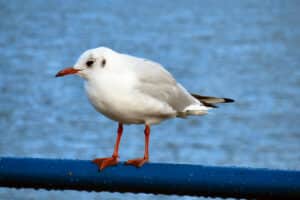 It was on a trip over to mid-Pembrokeshire to see St Brides Castle that a ship of another size was spotted. At anchor offshore from Milford Haven was a long tanker,

waiting to discharge its load (LPG gas? oil? at one of the Milford Haven jetties).

There was another family liaison at Stackpole Quay one day (coffee and cake from The Boathouse). 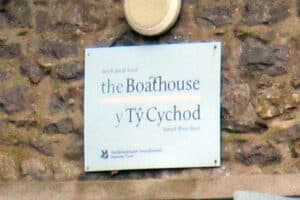 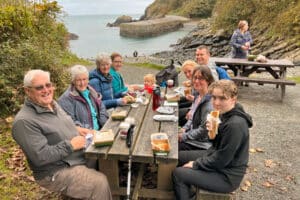 Who was the best thrower of stones – Toddler Huw? 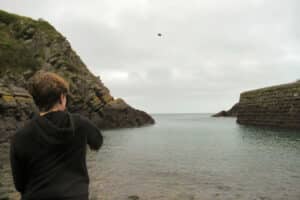 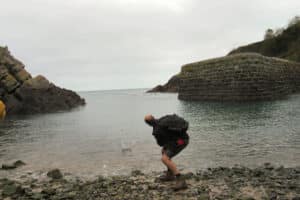 who hasn’t lost his stone-skimming skills…

From here it’s about a half mile walk over the clifftops to Barafundle Bay. 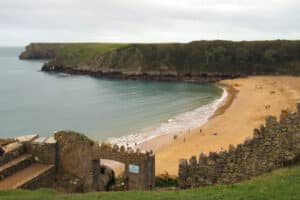 To St Brides one day, crossing the Cleddau Bridge in heavy rain.

now in the hands of Holiday Property Bond, (HPB photo),

although between the 1920s and the 1970s it served as Kensington Hospital, an isolation and then a convalescent hospital. Had the young Boatwif been a patient here these would have been her near surroundings: the beach 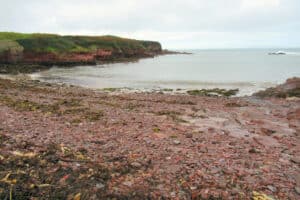 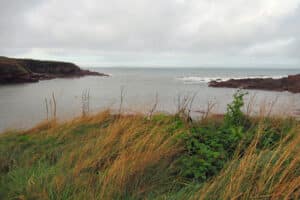 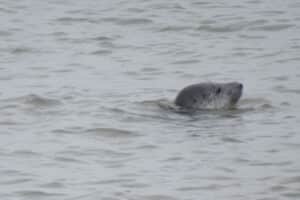 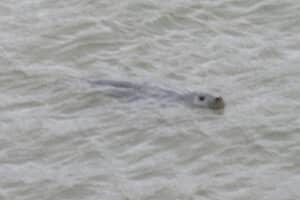 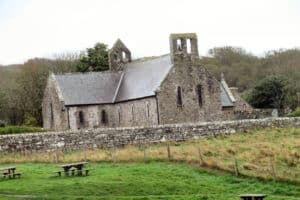 and Skomer Island about 4½ miles offshore. 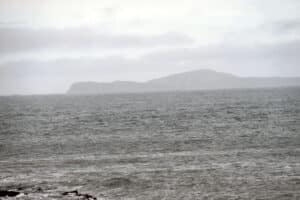 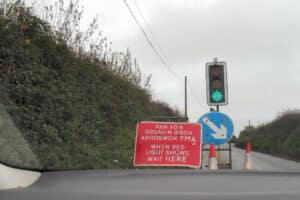 where  Pembroke Castle, still stands, dominant on its rocky outcrop. 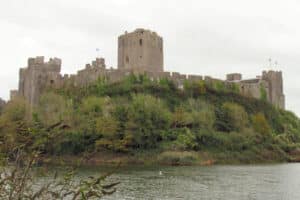 “It’s a pretty big castle for such a small town,” observed one of the two Js, (friends of The Cheshire Three on their first visit to West Wales). 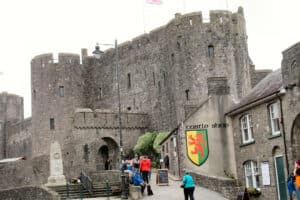 There’s a lot of castle to explore and a great many steps. “Not meant for bungalow legs,” observed a grandmother following her brood up a spiral staircase into Henry VII’s tower. 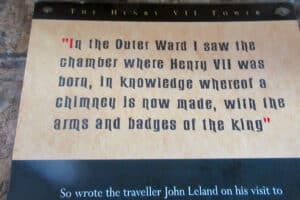 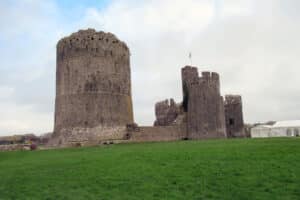 (Waving from up there was the Cheshire Mum with the two Js.) 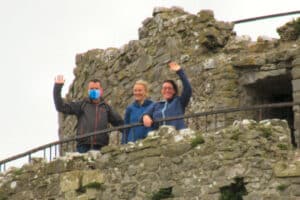 Pembrokeshire long ago seeped into the soul: time and again there’s a need to return, to refresh the spirit with the sound and smell of the surf,

to re-engage with local and national history

and to see again familiar places and faces… 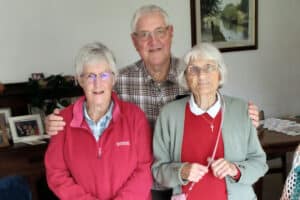 Hiraeth* filled the hearts of the Cleddau crew, as in dense post half-term traffic, they slowly headed back east.

*Hiraeth is a Welsh word that has no direct English translation. … It is a mixture of longing, yearning, nostalgia, wistfulness or an earnest desire for the Wales of the past.