Adderley to Market Drayton: 4 miles, 5 locks
A short cruise brought Cleddau to today’s destination, Tom’s Moorings in Market Drayton. There have been few bridges, houses and roads; the canal route alternates between wide expanses of fields, often grazed by cattle and pretty tree-lined stretches. It seemed the (admittedly delightful) middle of nowhere – but where exactly where were we and where are we now ?  Close examination of the Geo Projects canal map reveals that last night’s mooring was in Shropshire, being about two miles beyond the Cheshire boundary, but that beyond Market Drayton the canal enters Staffordshire.
This morning it was about a mile to the Adderley flight of five locks, pasts curious cows

on the offside, the badger setts dug into the banks on the towpath side.

The locks are set close together 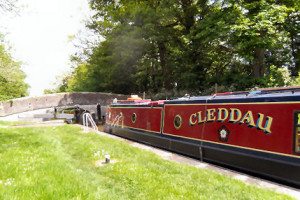 and they climb quietly through trees, past flowery banks and a memorial seat.

Behind it are signs for a farm shop: is there another canal as well served as this one for lock-side provisioning?
In the sunshine two chaps were busy scrubbing a cruiser; further along another cruiser was good only for a ducks’ diving stage.

Further along still, some hundred metres or so from the canal, there was another abandoned cruiser in a field…
On an unfamiliar waterway unfamiliar boats give rise to fleeting thoughts. Why would these boats be so named?

Almost daily there are questions for the Cleddaucrew to field, of the How do you say that? (Cleth –eye), What does it mean? (Swords in Welsh, the tributaries that flow into Milford Haven) and Where are you from? (Pembrokeshire a long time ago; see the Tudor rose, Henry VII was born in Pembroke Castle) type…
“It’s the moorings just after the fast road bypass,” had been the instructions from the gas engineer. “Take the short pontoon beside Whyne-Knot”. So here Cleddau is, plugged into electricity, a proper treat for the batteries, and the gas engineer will be checking out the fridge on Monday afternoon.
There was a sunny stroll into town,  past the modern wharf side houses which whimsically celebrate their canal frontages

and on past the Grove School, the house apparently bought in 1830 by the engineer in charge of constructing the canal to Thomas Telford’s design.

The town was quiet (well, it was Sunday afternoon) but it looked no more prosperous than on the September 2010 visit. (See judgement towards the end of that blog post.) Today empty shops and charity shops dominate the streets.

Buildings often look tired; straggly weeds poke out by doors and gateways. The Civic Society tries hard, as with this artistically dressed property, 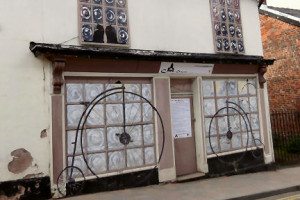 once a bike shop. It’s only fair, though, to give the town another chance tomorrow during business hours.
Back by the canal big boats – and small boats – continued to pass. From the towpath not a fisherman but a boat modeller

was having fun showing off the manoeuvrability of his craft!

Tomorrow – waiting for the gas man to call…