When not on boating duties there’s sometimes chance to jump ship and explore the local area.

At the furthest navigable point of the Wey is the small town of Godalming (population about 22,000). Arrive by river and you see a broad valley bottom, edged by steep sided wooded slopes.

Just beyond the Wharf cars are attracted to Sainsbury’s, Homebase, Pets at Home and Waitrose. As a pedestrian once you have got beyond the superstore car parks life improves… the traffic management system allows pedestrians to wander up the High Street pretty well unbothered by vehicles

– if there are any they are slow and moving in one direction only. The High Street, and those short streets that branch off it, offers an interesting variety of shops. Here people can seek advice on interior design, on soft furnishings and on objects d’art for their expensively furnished homes. They can browse in art galleries, buy supplies in an art shop (a destination shop perhaps for all those artists at the lock a few days ago?) and even pop into a pet boutique.

While being drawn towards the distinctive lead-clad church spire

on Thursday afternoon there was a distraction. Music. Brass tones were drifting up from the bandstand set in the riverside park.

Godalming Youth Band were playing. At first the pieces seemed melancholic. Then from inside the church

the unmistakeable tones of The William Tell Overture penetrated the ancient stonework. High on a pillar hangs an American lookalike flag – it’s the State flag of Georgia,

its founder having departed from Godalming in 1732. (See Godalming Wikipedia article here ).

and headed the five miles back downstream to Dapdune Wharf at Guildford. There was a delay at Catteshall Lock while two day boat crews were undergoing a training session

– and a creep through the greenery past the approaching widebeam hotel boat at St Catherine’s Lock.

“Inspecting the shrubbery, were you?” commented the hotel boat skipper…

At Dapdune Wharf there is good explanation of how the river became a navigation.

One family, the Stevens, dominated the barge building and the transportation of goods along the navigation and on to London for several generations. Regular barge traffic up to Guildford continued until 1959. Looking around and inside a Wey barge confirms that these vessels were rather larger than a narrow boat!

What then of Guildford? Traffic is shocking – you queue at a pedestrian crossing and then with a hundred others surge across the road when the light goes green. Vehicle fumes after the peace of the river come as a very unpleasant surprise. Up on the High Street, in the pedestrianised zone, the Surrey Scholar

provides a link to the University of Surrey (established 1966) whose campus is in Guildford.

The town lies on the banks of the Wey where the river breaks through a chalk ridge. The buildings creep up the hills – hence visiting both Guildford Castle on one hillside

and Guildford Cathedral on another

required a fair amount of legwork… You approach the Castle through carefully manicured formal gardens.

And here was a (pleasant) surprise. Laid out in flowers was a tribute to Alice in Wonderland, written 150 years ago.

“Yes, we had a bit of a do last weekend,” said the castle custodian.

In adult life Lewis Carroll visited Guildford frequently to spend time with his six unmarried sisters. It was here that he died and his body is buried nearby.

From the past to the present – in a corner of the gardens an exercise class was under way.

Climb to the top of the Norman keep and from a caged in viewpoint you can see down the wooded Wey Valley – and across to the newest Anglican cathedral.

Its building in the thirties was paused by World War 2, resumed in the fifties and the light and lofty structure was finally dedicated in 1961.

”Are you here to see the quilts?” said the cathedral guide. Arrayed in the cathedral are seven vibrant quilts depicting the medieval history leading up to the 1215 Magna Carta and the charter’s legacy. Here (Medieval 3)

you see the rebellious barons entering London and taking control of the Tower; negotiations at Runnymede; the agreeing of the Magna Carta; the rebel barons making peace with King John; King John’s message to the Pope asking for Magna Carta’s annulment.

are the faces of such as Gladys Aylward, Benazir Bhutto, Jimmy Carter and John Howard, all of whom worked to improve the human condition.

It was farewell to Dapdune on Sunday and a short cruise downstream, aided by extra crew who arrived bearing cookies.

(“I’m not three, I’m THREE AND A HALF!) became the latest wearer of the pink flowery life jacket. 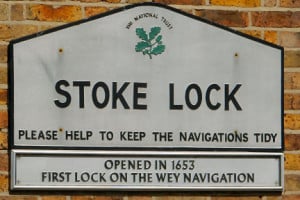 before the Surrey Three had to return to life ashore.

“Escape the noise” became the imperative – away from the roar of traffic along the parallel A3. Down through Bower’s Lock;

this would be good

Then a mile further on a peaceful towpath mooring was found. In the distance is the tower of Send Church, the only building in sight. Emptiness in the crowded south east – just magic when you can find it!