An abbey, a coalfield and a slagheap

Boat traffic was busy on the remaining 6 of the 11 lock Atherstone flight this morning. At every lock there was an upcoming boat – and at the bottom there were three boats waiting to start.
The canal drops away from the town into a quieter, more rural environment. 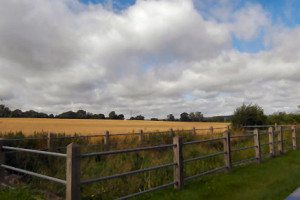 True the West Coast railway line is still there, occasionally very close, but it is not a constant companion. Views are open over fields and slopes and the River Anker flows across the broad valley bottom.  You begin to wonder what location fix you would give to non-canal folk. Well, due east is Leicester, north-east is Loughborough, due north is Burton-upon-Trent and very close to the west is Tamworth.

The boat meandered the couple of miles to Polesworth where a pause was called. While the Captain undertook boat maintenance (a gangplank tale) Boatwif headed across the village. The square church tower is plainly visible from the canal and once before when Cleddau and crew were passing this way bells had peeled out across the valley. A couple of footbridges over the river lead to a narrow footpath to the abbey door. 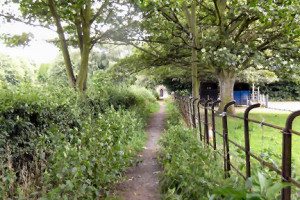 A sleek modern reception area leads into the twelfth century Norman church, built on the site of a Saxon church.

Monastic music on an audio loop creates an atmosphere of deep calm and timelessness. 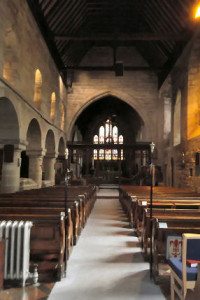 Behind the church is a glorious sensory garden developed in what had been the Abbey cloisters. There have been recent archaeological digs in the gardens and next month ten Saxon skeletons are due to be excavated and reburied in the newer churchyard. At the end of the drive (completely missed earlier by taking the footpath route) is the 14th century Nunnery Gatehouse,

restored recently courtesy of lottery funds.
From the canal it seems hard to believe that this is the heart of coal-mining country. Less than half a mile further on, alongside the towpath, is this memorial to Pooley Mine.

It is not the only information post in this area to use the power of words to convey the past.
Further along again (about a mile) is Pooley Country Park, where since 2002 a heritage centre records the development and demise of mining in the area. Via a time-line, 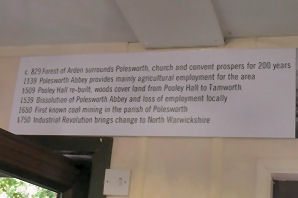 artefacts and some videos the role of coal is explained. It seems shocking to learn that the first pithead baths in the country were constructed here, but those not until about 1928. Now Pooley Hall is a country park of 150 acres, part of it is an SSSI and here can be found the Hairy Dragonfly, the White-legged Damselfly  and Dingy Skipper butterflies (Techno Son-in-Law : take note!)
A hundred yards or so along is a bridge bearing the M42: no painted mural below it but some thought-provoking images illustrating the concept of Support Structures.

A coal pit produces waste – and right beside the motorway near Alvecote is a large mound of spoil, which has naturally regenerated. From the top is a splendid view, down onto the M42, out over the Anker Valley towards Rugeley and Cannock Chase, supposedly across four counties. (A guess: Warwickshire, Leicestershire, Staffordshire, West Midlands… Corrections accepted!) The trees have been thinned, a sculpture on the top (shaped as a stack of beech leaves) 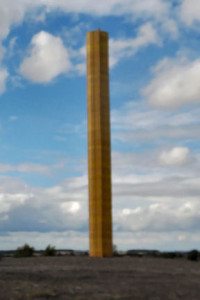 represents how the energy of the sun stored in leaves and trees is preserved in coal.
Now a quiet mooring near Alvecote, away from both road and rail, is providing a peaceful evening.
For the Captain the most interesting conversation of the day was with a one-time theme park ride inspector, one of only 147 in the world, returned to the UK now after stints in India, Seattle and Hawaii… Odd how a day can leap from a 9thcentury Benedictine nunnery through industrialisation to the razzmatazz of Las Vegas…

Tomorrow: through Alvecote, Tamworth, Hopwas and beyond