And the band played… 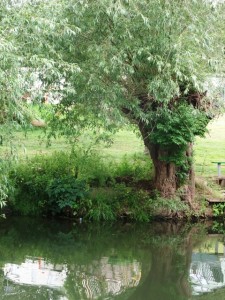 Saturday’s blog failed to appear until Sunday morning: if you missed it do check out Adventures on the Avon below before reading Sunday’s submission.

It was a late start from Pershore this morning, Boatwif keen to hear the Abbey bells first.  The mooring was beside the town’s recreation ground. By 10am it was empty, the other boats having gone and no runners or ballgame players in view.  Just one sole person slowly walked about, head down, his hands grasping a metal detector.

The first lock is within half a mile of Pershore. When first encountered Wyre Lock takes you by surprise, its diamond shape suiting short cruisers better than longer narrow boats. The gates were open, in our favour.

“Come in, come in,” announced the skipper of a narrow boat already tied up there. “We’re pleased to have you with us.”

On the lock side were two further people, both wearing life jackets.  It took some moments to work out who was who.  The female belonged to the narrow boat and the male, smartly turned out in crisp collar and tie, shirtsleeves neatly rolled to the elbow, was the local ANT (Avon Navigation Trust) volunteer receiving ropes, operating the lock and dispensing advice and information. So relieved were the Cleddau crew to have a smooth passage through the lock that a donation was made into the ANT box.

The morning rolled on. It was cool, but dry. Twice a hawk hovered and glided above our heads.  Cleddau cruised past Tiddle-Widdle ‘Island’, its quaint house just visible. At one point the left bank was crowded with cows grazing, and in their midst sat a couple, David and Ruth Archer, perhaps, taking time out by the Am…? * On grassy slopes on the right bank sheep quietly  munched and chewed.  Tall reeds and willows bordered the banks of the next stretch. Then towards us swam a graceful object, a black fruffly-feathered swan.

Next came Fladbury Lock. The immediate lock approach is narrow and view of the lock is obscured. The navigation notes instruct steerers to sound their horns, from two different points of the approach. Cleddau drew in beside the landing stage. Water running out of the lock indicated a boat coming down. The gates opened – an empty chamber lay before us. Above eight volunteers rushed to take ropes and assist in every way. “We want to do it, we love it,” explained a teenage girl. The boats rose. High on the lock hut wall were notices recording flood heights, stark reminders of the fierce floods in July 2007. Such enthusiasm and courtesy was in sharp contrast to the Mr Angry episode at Rufford yesterday.

On some more miles to Chadbury Lock. At last benign Bredon Hill had faded from view.  Now a heavily wooded ridge was apparent to the left.  A cuckoo called persistently. Again at Chadbury Lock there was ANT volunteer help, two sturdy men this time, the senior one the Reach Keeper between Evesham and Chadbury. ANT help is available on summer Sundays, it seems.

Before long we approached the outskirts of Evesham. Reasonably priced diesel at Sankey Marine! Was that the tree we crash-landed into when we had that major breakdown, erm, 17 years ago? Avoid the rope-pulled ferry across the river at Hampton! The iron girder Abbey Bridge hove into view. Then a shout from the back deck. “It’s Markland, look!” There it was, recently repainted, the distinctive shape of Salty’s old narrow boat! On board a new owner was hard at work refurbishing it.

Visitor moorings at Evesham are opposite Abbey Park. We pulled in, right opposite the bandstand. And there, assembling before their concert, were red jacketed musicians. Lunch was taken on the front deck, serenaded by music drifting across the water, interrupted only by the practice commands from the cox of an Evesham Rowing Club novice four.

The park seemed crowded, so further investigation was needed. There are several well planned play zones, a wet area with fountain footpads, tennis and ball courts, sandpit, water plant zone, a cafe and a busy ice-cream van. It was a “something for everyone” scene; listen to the band, enjoy a picnic, play with the children, watch the river, examine the planting… Plenty of space, fresh air and a bit of sunshine happy people doth make! In the town an occasional Sunday street market was being cleared away; in a churchyard local food producers pressed their wares.

Back to the park for the closing pieces from the Bream Silver Band: feet tapped, hands clapped and on the opposite bank Cleddau gleamed in the sunshine!

*Ruth and David Archer are farmers who keep Hereford cattle in the Radio 4 serial “The Archers”.