As never seen before 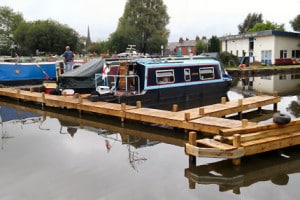 You know how it is – you live in a neighbourhood or you travel a particular route very regularly and your antennae twitch when you realise that you’re seeing something a bit different, whether it’s a road diversion or a property for sale or a change in some way.

It was after midday when Cleddau really got under way, after a wait at the water tap for another boat and then another long wait while the tank filled. The route south on the Macc is pretty familiar now although the last trip along it was about four months ago after the Easter Weaver Navigation cruise. Opposite the water tap (and Bailey’s Trading Post) are the Victoria Pit Moorings.  There’s a most distinctive structure which has been there a long time, a sort of concrete play castle for kids. Who knows its origin… but now it’s undergoing a makeover: wooden roof supports and door and window frames have been installed… is it a Grand Design Castle? A canal side toll house? A shed with an eccentric twist…?

Those in the hot south east may laugh in disbelief, but early afternoon the weather turned wet, seriously wet, which significantly limited access to good views. An hour on Boatwif sensed from below decks that Bollington or thereabouts had been reached. The Captain forbade access to the back deck due to the heaviness of the rain, but a strange glimpse was made of Clarence Mill…

The canal passes behind the houses on Cedar Way in Bollington; moored on the tow path opposite were two interesting boats, on one a sign proclaiming Black Country to Black Sea Expedition 1992, an historic boat indeed that undertook a mad or brave voyage (choose your own adjective). Still behind the Cedar Way housing was another new sighting: since when has there been a young lady lounging at the bottom of the garden?

Rain came heavily again; on Cleddau chugged, past Kerridge, behind the manufacturing plant of Astra Zeneca on the Macclesfield outskirts. Then, just opposite Hovis Mill, was tied a mystifyingly named boat: Ten 60 Six …oh, 1066!

The marina area at Macclesfield always looks slightly chaotic, but look, new pontoons are being installed.

Just beyond the next bridge (38, Black Road Bridge) came another surprise. Where last time some new pilings and an attempt at foundations were being laid now new buildings have sprouted, a house and a line of apartments. Not finished yet, but the build will be interesting to watch…

As the canal leaves Macclesfield a high wall soars upwards. A couple of years ago a sudden and drastic landslip left cars stranded in unreachable garages and gardens were lost. Considerable repairs were made, the tow path being closed for a positive age. Now, in recent months, a further length of high wall has been reinforced by fine buttresses.

On further, passing nb Leonard – an unusual font for a boat (do boat painters / sign writers  talk in”fonts”?), the boat moored apparently at Granary Wharf (and where is that…?)

Not much further now to a suitable overnight mooring – but what has happened to that tree? Totally de-branched, no hope of foliage, just a power wire forlornly extending from it.

Mid afternoon, under slightly lighter skies, Cleddau was moored up. Off came Boatwif’s cape (tent/poncho, call it what you will) this (in)famous garment had its first boat outing today – and ample cover it provided on the back deck.  Still to be tested is its practicality during steering stints and windlass wielding duties… Reports may follow.

Early evening there were two last extraordinary sightings:  a procession of canoeists, tiring, “only two more (pause, Boatwif expecting ‘miles’) bridges to go then we can stop.” At the back, stretched out, feet up, rested a gentleman of mature years, content that his female crew member was paddling hard.

The final  sighting today: there was a fleeting visitation from the Cheshire Three: “Where are my hands, Granny?” cried the Cheshire One, flapping the  over long, very purple sleeves of a very purple garment . “It’s for when we go camping.”

Such sights today make Boatwif grateful for the sanity and security of a sixty foot narrow boat…!

(Tomorrow: to Bosley and down the lock flight).