Back on the watery road – and a few extraordinary things…

Hull care… you need to protect your hull if you want your boat to last. That’s an understatement for all boat owners.

Cleddau has been ‘out to sea’ four times in recent years (across the Wash in 2014, last year down the tidal Severn followed two months later by a cruise up the tidal Thames and then in May this year the boat spent six nights in Salthouse Dock in Liverpool).

The last time Cleddau’s hull was exposed to air and to inspection was in March 2014 during her winter at Stoke Boats. It was while in Liverpool that the Captain began to mutter about “the state of the anodes” and “bottom-blacking”.

attached to the hull  to gauge how much it has dissolved while preventing steel corrosion, therefore protecting the hull. Bottom –blacking involves cleaning dirt and debris from the hull before reapplying a couple of coats of bitumen-based paint.

Boaters are a gregarious bunch, keen to swap advice and experiences. Thus it was the Captain learned of the slipway and bottom-blacking facility at Scarisbrick Marina. On Wednesday afternoon there was Cleddau, perched on wooden blocks

on the hard standing, waiting… Newly blacked she had been given a fine bill of health by Daniel, the marina’s owner and boat expert. But to sail her away she needed first to be put back into the water…

keeping the fridge and freezer running was disconnected. The tractor reversed the hydraulic lift low loader back towards the boat 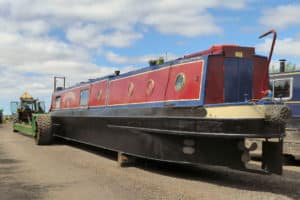 – and carefully she was lifted from the blocks,

balanced on the loader, towed along to the slipway, 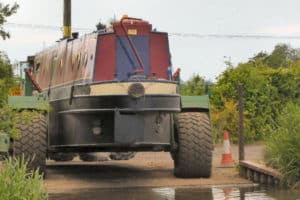 and gently re-immersed into the water.

It was a painstakingly slow process!

Inspection inside the cabin revealed no damage – thanks yet again to the versatile bungee cords!

Still with wheels on Wednesday evening it was off to the nearest Tesco (4 miles away at Southport). Just time to glimpse the Irish Sea again 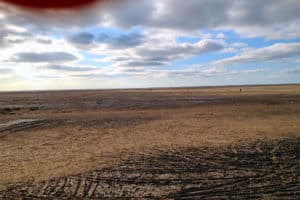 – but where was it? There was the pier 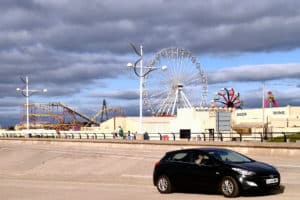 but the tide was definitely out!

Thursday could not have been a lovelier day to be back out on the canal, this time travelling eastwards. Back past several terraces of pretty cottages.

Back through several swing bridges.

And then, there at Burscough was Free Spirit,

and on board were Irene and Ian, waving frantically at the windows. Last summer the crews of Cleddau, Tentatrice and Free Spirit had enjoyed chinwags on the K&A, at Hampton Court on the Thames and at Marsworth on the Grand Union. A cup of tea on board Free Spirit, cruising plans exchanged (they heading for the IWA Festival at Eldonian Village before a week in Liverpool Docks) stories regaled, anecdotes shared – what an excellent way to break a canal journey…! Thanks Irene and Ian.

The cruise continued; “Look, a date on the bridge!”

called the Captain, (Burscough Bridge) and not long after: “Look at the date on that bridge!”

(at Lathom Junction, leading to the Rufford Arm, and the route via the Ribble Link to the Lancaster Canal).

Onwards, past the site where a trip boat had paused a few weeks ago to show a Woodhenge-like layout to his passengers,

and past Parbold Windmill, 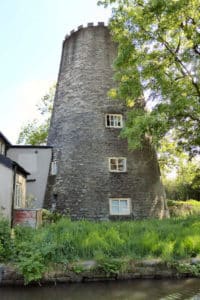 the studio and gallery of James Bartholomew  (Oh, for a return visit!)

The stone bridges crossing this canal have a pleasing shape: it’s taken some time to recognise that the often off-centre stripe on the stonework 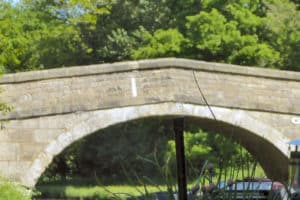 of so many indicates the deepest channel / best line for a boater to take.

After a night’s mooring 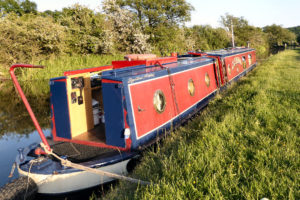 overlooking the delightful Douglas Valley it was onward and upward. Wouldn’t you normally associate a duck house

with Westminster rather than Wigan…? On past Wigan Pier,

up two more locks, a right hand turn at an unmarked and unnamed junction, down two locks – and, just past Plank Lane Lift Bridge 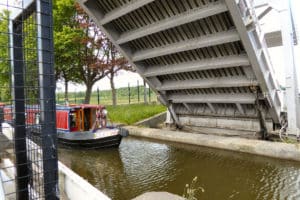 (a new marina to be developed here, according to this week’s announcement) the boat was moored overlooking Pennington Flash.

Cruising along the Leigh Branch brings you face to face with a previous world of cotton mills,

and canal-carried freight. The Lancashire coalfield in 1907 produced 26 million tons of coal. Now what you see is land in slow recovery: country parks emerging from tracts of subsidence, spoil and worked out land.

Northern friendliness continues: no anglers berating boaters – other than, on Saturday, a good-natured call from an angler to hurry up. “Come on Rosie and Jim,” he grinned. 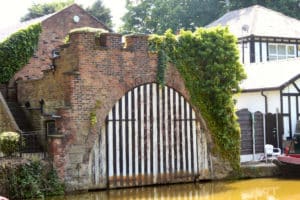 over the amazing Barton Swing Aqueduct 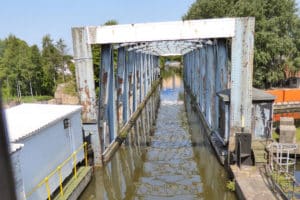 high above the Manchester Ship Canal – to Trafford.

There is easy canal-side access to the famous Trafford Shopping Centre. How extraordinary it is: neo-classical figures 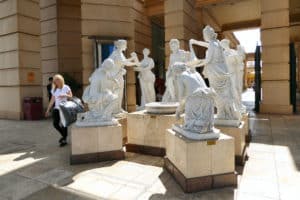 and Legoland, a carousel, the Sea Life Centre and BHS, a piano 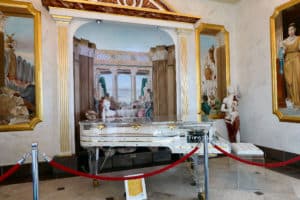 on a walkway playing, though there be no pianist – odd, odd, odd! (‘The Trafford Centre’s unorthodox style of architecture was prompted by the wish to offer a unique shopping experience’. Read more here in the Architecture section).

Is it even odder to have had such a continuous run of fine weather? For the second time this summer the Captain got busy with the makings of a Pimm’s.

“Yours is the green one, green for Glyndwr,” he said, “mine’s the red one, red for Picton”. (The odd reader might recognise this reference).

Cleddau is officially homebound – though her final route is as yet undecided: it’s dependent on the state of the Bollington Leak Repair. Will it be northbound, clockwise… or southbound anticlockwise?

Miles and locks from current mooring at Dunham Massey back to Higher Poynton, via the River Weaver (southbound route) : 96½ miles, 2 swing bridges, 57 locks