Bands, bells and the elf on a shelf…

On the morning of December 1st Charlie was spotted

Charlie is an elf, his role being to monitor children’s behaviour (US: behavior) during the day and to report back to Santa overnight. The elf’s job then is to return to the child’s house by morning, hiding in a different place, from where he can continue his observations.

The Elf on a Shelf is a recent American tradition, now beginning to appear in the UK. The Elf’s appearance in toy departments and bookstores is a sure indicator that it’s about to become holiday time.

Though the word “holidays” is derived from “holy days” British folk tend to regard holidays as an opportunity to travel, to lie on a beach or beside a pool, to have a change from the normal routine. Americans, however, are wedded to “holidays” as seasonal celebrations: Thanksgiving, Hannukah, Christmas. In the US time not spent in school is a break. Follow the school districts’ calendars and you’ll see Thanksgiving Break, Winter Break, Spring Break, Summer Break. Be warned, in California when signs and greetings proclaim “Happy Holidays” expect to see Santa scenes rather than seaside paraphernalia…

A common feature of the Holidays season is a community parade. (See here for those listed throughout San Diego County during December.)

The first Parade of the 2019 season was just down the road (well, a couple of miles away across the city of San Marcos). With “Step off” being at 1pm on Sunday Cal Son and Cal Guy Snr had conferred as to an appropriate spectator position. Soon the Cal Clan had bagged a pitch pretty well opposite the Number 1 Fire Station. The broad dual carriageway was strangely absent of moving traffic although along the parallel rail track the Sprinter train continued to run.

The sky was blue and cloudless, the sunshine warm and locals were squatting on the raised kerb at the edge of the road.

and the flag bearers shoulder to shoulder.

and then the wind sections. Behind was pulled a water trolley.

The percussionists, who are always static during field displays, were deployed to dish out candy and free books.

Classic cars, dressed in festive decorations, were next:

Following a float or two

Then there were the Veterans of Foreign Wars.

More floats passed by and – Batman…

before one person kit cars swooped and circled along the carriageway…

Bagpipes then, played by the Pipe Band of University College Riverside.

There were church groups,

more floats, and then the flag waving,

The Parade had nearly passed, when from the yard behind the Number 1 Fire Station the highly polished, dual-axle fire engine emerged. There was a driver at  the front,

another at the rear 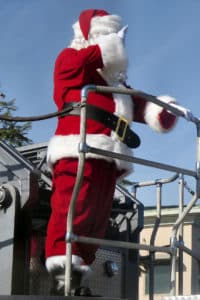 Perhaps it was the holiday music or perhaps it was the repetition time after time of “Merry Christmas” (a phrase much loathed by Cal Gal as being inappropriate when after all it was only 1st December) that persuaded folk to spend the rest of the afternoon rigging up some outdoor Christmas lights.

On a final visit to Balboa Park a mystery was solved. A week earlier Boatwif had listened out for a favourite sound, the ring of bells from the California Tower, but no bells were heard…

Scaffolding is currently hugging the lower sections of the Tower.

Notices explain that a Seismic Retrofit Project is under way,

reinforcing the iconic tower against the potentially dire effects of earthquake damage. (Read paragraph 2 here for a wonderful array of architectural terms describing the Tower’s facade)

and listen here to what normally occurs on the quarter hour and on the hour (6pm).

It was Monday morning and certain areas of Balboa seethed with activity. Christmas trees were being lit inside the House of Hospitality,

Down at Spreckels Organ Pavilion (as seen on 25th November) 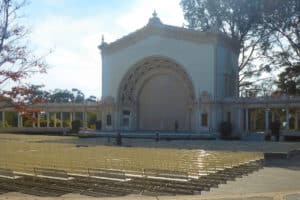 a large team was busy assembling the huge Story Tree within which the Nativity is enacted. (Set construction at about 1030

For just one week a year the eight wooden chalets that overlook the Pavilion are opened up, each one revealing a staged tableau from the New Testament story,

each one explained by a Biblical text in English and in Spanish. 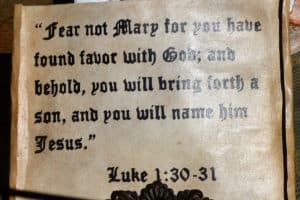 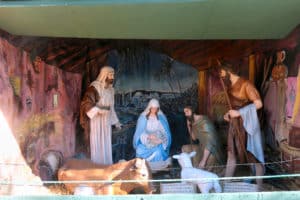 The preparations were all for December Nights, the forthcoming weekend of music, lights, food and craft fairs.

To stroll around Balboa Park is sheer pleasure. You can stand on the high Cabrillo Bridge near the Zoo and gaze at the Downtown high rises,

wonder at the lush growth in the Botanical Building,

notice a tribute on a seat

It was farewell San Marcos on Tuesday morning

and a northbound heading to Los Angeles.

There had been few sightings of boats on this trip but as NZ 2 took off late afternoon in hazy conditions.two tankers were resting at anchor outside the Los Angeles docks…

Within a few days of being back on the ground in the UK Boatwif was able to sate her bell fascination: a team of local Handbell Ringers were supporting an annual Christmas Tree Festival – and a very pure and tuneful sound it was too!