To leave the boat, after so much angst about the paint job being completed – why?

Well, for a wedding!

(Boaters – skip further down if weddings don’t interest you…)

Thunderstorms, wild winds, lashing rain – all held off on Saturday 21st April as Bristol Niece was married in the same church as her three aunts, her parents and her sister before her…

And the sun shone all day long!

With the marriage ceremony south of the Cleddau Bridge and the reception north of it, organising convenient accommodation was important. How was this for a view the night before the wedding –

and this on the wedding morn…

Under the shadow of the castle walls cousins and aunts gathered

before climbing the steep little hill to the church. On a glorious Spring day tree blossom, floral displays,

A hymn sung in Welsh, a church choir led by a performing arts graduate cousin, a surprise flash mob performance from a ladies’ choir  and a peel of bells made it a totally joyous occasion.

The Milford Haven estuary collects water from the Eastern and the Western Cleddau rivers as well as the Carew and the Creswell rivers. The movement of water is constant as the tides rise and fall twice daily and the rivers spill downstream to the sea.  There are frequent adjustments to the Cleddau Bridge scene: clouds cast down shadows and patterns, the wind creates ripples (sometimes even ‘white horses’), motor and sailing boats bob about at their moorings, swinging around courtesy of tide and wind. Despite cool temperatures and frequent rain there is often boat movement to be observed: a sailing boat,

probably from one of the yacht clubs, a racing rowing boat, a pilot boat, a speedboat,

a sea-going ferry (The Irish Ferry crosses twice a day between Pembroke and Rosslare ).

Nearby are plenty of boats on dry land (though viewed during very wet weather!) The West Wales Maritime Heritage Society  (in what was Hancock’s Shipyard) is proud of its freshly painted Tenby Lugger,

a traditional sailing workboat used as a dayboat around the coast and along the muddy creeks of the estuary. (This had been built as a college project, will be fitted out with an engine and sails and is due to be launched in Tenby at the end of July). Coracles built by the Scouts show just how tiny these vessels used for river fishing were.

A model of the Cleddau King

in the Pembroke Dock Heritage Centre was a reminder of the last car ferry that crossed between Hobbs Point and Neyland. See here to discover where this boat ended up and how she was renamed…

Some decades before the Cleddau King (or the Cleddau Queen before her) these were the boats that could have been seen on the Milford Haven, the Sunderland Flying Boats.

(Did anyone else grow up making the logical connection that all aeroplanes land on water, since that was what Boatwif used to see with her very own eyes…)

Driving in Cleddau-land is driving in Tractor-land… St Davids was finally (tortuously!) reached one day.

A squeeze through the tiny city streets on a heading west eventually lead to St Justinians, for access to the Pembrokeshire Coast Path and the new St Davids Life Boat Station.

Here is based the 26th (and last) Tamar-class lifeboat

(the newer water jet propelled Shannon-class boats have been coming into service since 2014). The new £11 million boathouse (officially opened in March 2017) is stunning. Shout boards and video loops

reveal the importance of RNLI’s work since its first lifeboat in this area in 1869. A stroll along the Coast Path revealed vivid Spring- time colour, here sea thrift.

To Tenby one day,

where even out of season there is much beach equipment on sale. 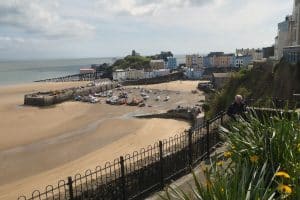 and again a pair of lifeboat stations,

the newer one constructed for £5.5 million in 2005. Down on Castle Beach, after a trip boat to Caldey Island had departed,

a sea tractor adjusted the pontoon to avoid being submerged by the incoming tide.

One last ‘beached boat’ – the seafood shack at Freshwater West has had a boaty makeover. 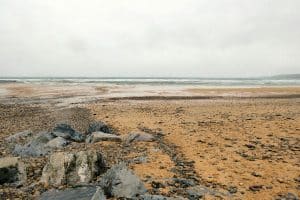 Revisited for a wedding, reminded of the westerly winds, the salt-tinged air, the ebb and flow of the tides in this far west corner  – now returned with more crowded Pembrokeshire memories.

Finally, seen in a Tenby shop window: might it come true?!