Birthdays on boats – and bye to big locks! 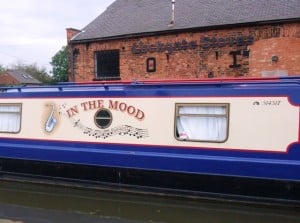 Some stats since last Saturday:

For those with an urge to discover where Cleddau is on Sunday afternoon, well, Willington, 12 miles west of Sawley, on the return leg back up the Trent and Mersey Canal. The crew of two returned to the boat at Sawley on Saturday with no agenda apart from relaxation and an eventual arrival back at the Poynton moorings, some time in October.

The travel plans between Bedford and Long Eaton (nearest rail station) worked superbly: Long Eaton – change trains at Beeston – Bedford. Fans of the East Midlands line know that you can travel Nottingham – Loughborough – Leicester – Market Harborough – Kettering – Wellingborough – Bedford (and on to Luton and St Pancras).  Those of us who navigate the East Midlands by road think only of the M1 so these two Saturday train journeys presented refreshingly different views. Equipped with off peak returns, valid for a month (as advised by the Cheshire Daughter) all was straightforward. On Saturday (24th) a taxi departure at 1140 for a 1207 train saw us back at Sawley at 1430, after a brief foray into the Long Eaton Co-op. And there, at Sawley, the sun was shining on the water and the Captain had an idea: Why not start boating now? As he spoke a boat festooned with birthday banners and balloons passed going downstream towards Trent Lock. It was the Captain’s birthday – so he was entitled to choose…

Within a half hour the shopping was stowed, the marina key deposit reclaimed and boating gear found. On went the life jackets as the first mile or so were on the deep and wide waters of the River Trent. Then, at the second lock, Shardlow, another boat was waiting to go into the lock, another boat with birthday balloons, 80 stamped all over them. Tactfully, she thought, Boatwif enquired of the several windlass-wielding men of mature age buzzing around the lock as to whose was the birthday. “Down inside,” came each reply. Only later did she reflect that the balloons had been prettily pink and not nautically blue…

Far enough from the drone of the Castle Donington motor racing track and of the A50, having passed en route some interesting boat names,  Cleddau was moored up. Happy birthdays by phone from the Californian Clan, ‘When I am 64‘ sung by Bernard Cribbens played over Skype (Techno Son-in-law), the annual email birthday greeting from the old school friend now Florida oil tycoon and a tasty meal: not bad for an unplanned birthday bash.

Sunday has been marked by drizzle, by light rain, by seriously heavy rain and by banishing the broad locks behind us. The cyclists, dogs and dog walkers on the towpath were even more numerous than the oncoming boats. The locks at this end of the canal, especially Swarkestone and Stenson, demand great care and respect. Stenson has a depth of 12′ 4″ (3.76m), visibility for steerers and lock side crew is impaired by a road bridge and a pub alongside provides good audience numbers. Cleddau had hoped this morning for company (of similar length) since two boats in a broad lock suffer less movement. The Captain offered to help the small cruiser ahead of us work through the lock as a single boat but their crew were determined to share the cavern with a steel giant. All went well although several times the paddle gear had to be lowered to reduce the turbulence caused by the incoming flow.

Early afternoon, in heavy rain, Willington (and its power station) hove into view. No matter that there is a train line just behind the hedge, no further joy could be derived in such a downpour. In the  village of Willington (three pubs, a railway station and a few shops) there is even a mooring for dogs! Tomorrow, onward through Burton upon Trent to Alrewas; there may be  a cunning plan for Tuesday.

Falklands Friend is in the UK on home leave, fresh from midwinter in the South Atlantic;

University academic, born in Bahamas, childhood in Zambia, has lived and worked in US;