For a number of years Sue and Vic of nb No Problem  have been an inspiration to the Cleddau crew. Sue’s blog is informative about a wide range of boating-related topics. Her guide to the River Nene was a huge help when Cleddau made her first trip down the river to the Middle Levels and the Great Ouse. Last summer it was Sue in person on the River Wey who gave so much help and encouragement about moorings on the River Thames and around London. Now her 67’ boat is for sale. She and Vic have lived aboard for a number of years and the boat is flexible enough to accommodate lots of visitors too. See here for further details of the boat.

We wish them well as they move onto their new wide beam boat, No Problem XL.

The northbound trip to Liverpool continued on Monday. “We could park the car, walk up to meet you, do some locks and then have a pre-birthday meal in a pub…!” Cheshire Mum had suggested. So, after some very wet walking and paddle-gear winding,

much steering by Techno Son-in-Law

and some too by Cheshire Mum

(“Remember the new throttle that was put in for me…”) it seemed appropriate to boost energy levels – and blow out a candle or two! 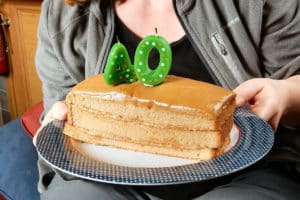 Eight locks in just under three miles, brightening weather and a good meal in Alsager made for a good day.

Heartbreak Hill some folk call it, the 34 locks between Harding’s Wood Junction and the flat lands of the Cheshire Plain beyond Middlewich. The locks come in pairs, or triples, sometimes clumps… It was onward on Tuesday from the northern end of Rode Heath to Wheelock and beyond. Waterproofs were redundant (What? No raincoats!) and later there was the additional thrill of drying washing outdoors (see below).

Two locks down came an announcement from the Captain. He hurried back along the towpath from Lock 56 where he’d gone ahead to prepare the lock.

Upcoming in the lock ahead was a boat with a history. First meeting had been in Stratford-upon-Avon: the skipper, a tiny lady with an air of absolute authority, had her crew lined up on the edge of Bancroft Basin. Some sort of inspection was taking place. The crew were Girl Guides, out for a floating Guide camp.

Years later there was Wildcat again, on the southern Grand Union. The crew again were Girl Guides, ranging in age from 10-18. They were divided into three four hour Watches: Cook, Boat and Rest. Often even four young guides could not shift the heavy GU lock gates and so a pattern evolved. Cleddau’s Captain would lend his weight to the gates. Cheerily the two boats progressed up through the locks towards Cowroast until a halt for supper was called.  Next morning, at one minute past nine, there was a knock on the cabin. Three eager little faces were there. Pleadingly one of the guides acted as spokesperson. “Please will you travel with us again today? You’re so helpful!” And so much of a second day was spent with the Wildcat guides. When on Cook Watch they had to plan, shop and prepare the meals. When on Rest they could wash their hair and write their postcards… this was long before the days of mobile phones and social media. The senior guides, after several Wildcat camps, were experienced boaters. “I’m choosing my universities on where I can live on a narrow boat,” one confided.

Then years later, Wildcat and Cleddau crossed again. The summer Guide camps were still being run. Many of the guides had kept in touch with the Wildcat skipper. “Yes, I went to the wedding of one of them a couple of years ago,” the skipper explained. Her boat on Tuesday was part way through a month long cruise, crewed now by adult friends. Wendy, the skipper who had inspired a love of the waterways to so many young people, has died now, but the much-loved boat is still plying the cut.

Many of the locks down Heartbreak Hill are duplicated, positioned side by side, which makes for fewer delays in busy times. At Lock 57 (sadly within earshot of the deafening M6 motorway)

a C&RT employee, distinctive in his blue sweatshirt and buoyancy aid, was gazing into his handheld computer.

“Are you checking boat licences?” Boatwif enquired (knowing that Cleddau was legal in this regard).

“No, the White Shirts do that,” was his reply. He described his role as detailing maintenance work to be done, checking task completion and listing and reporting new work. Lower down, at Lock 63, he warned, there might be a delay due to a lock chamber rebuild. Subsidence and flooding of the cellars of canal side properties had necessitated a £200,000 project. Sure enough, the towpath side lock chamber has been restored to use (see the differing shades of brickwork)

and the parallel chamber is now being rebuilt. There was an impressive array of heavy duty equipment on site

– how unexpected it was then to hear one of the work crew ask the others: “Anyone seen the tape measure…?” Just for a moment images of fabric and dressmaking pins came to mind…

At a rural mooring a mile or so beyond Wheelock peace reigned. After days of rain and hail what soul satisfaction there was to have two laundry loads drying in the breeze on the whirligig line attached to the tiller.

Onward on Wednesday, a further 5 miles and 8 locks, to and beyond Middlewich. There is housing now at Ettiley Heath, squashed between the railway line and the canal.

The canal is deep here, the sides having been built higher

to overcome the effect of the subsidence from past salt-mining.

not far from just one of the salt plants in this area.

Then comes King’s Lock, the chandlery just below always a busy place.

Take a sharp left here, for the Middlewich Arm and waterway routes to Chester and Llangollen. For Cleddau though, it was onward, past the first hire boat base,

down the three Middlewich Locks,

past the second hire boat base to a mooring place near the shops.

but the White Bear pub

has eye appeal too.

There is one more lock, Big Lock, on the town’s northern outskirts.

Time was when wide beam barges could reach here from Manchester and Wigan, but then a flood in the 1930’s destroyed the Croxton Aqueduct and the replacement steel trunk is only 8 feet 2 inches wide.

It is glorious countryside from here on

and by early afternoon an ideal mooring spot had been found. Sunshine, walks, gentle views – what more could one want…?

Why then was that night – and the next two nights – spent back in Middlewich?

(The next episode About Turn will provide further detail…)