The Captain took to blog-writing last night, “with the permission of Boatwif” he wrote! Suppose now the secret’s out that theCleddau crew is afloat again the tale will need  completing…
Friday: The route from Higher Poynton (by canal) couldn’t be simpler: point north (for about three miles) and instead of turning left down the Marple Locks turn right along the Upper Peak Forest Canal to Whaley Bridge and Bugsworth Basin. There are no locks at all on this route but there are four movable bridges, three of which were negotiated on Friday. The first bridge,Turf Lea Lift Bridge, requires fierce windlass winding to lift and to lower it. No problem there, except that nb Hero, moored on the lock landing, had its bow rope entirely in the water and the Captain, armed with boat hook and mallet, managed to secure it.

The second bridge, Wood End Lift Bridge, was efficiently wound by the Captain. Come the third bridge, Higgins Clough Swing Bridge, Boatwif bounded off the boat with the key to release the lock so as to raise the handle so as to push the platform towards the bank … but somehow it couldn’t be done.
Only last week there had been trouble at Broadhurst Swing Bridge where the mechanism jams but here the key just seemed to disappear into an oily cavity. The instructions for bridge operation were re-read: put key into lock, but somehow the lock was sort of absent… an elderly gentleman was eager to help but to see him push and heave the bridge would not have been fair. Again the Captain was called to investigate: “Ignore the words, the lock has been removed, just lift the handle – and push!”  A procession of walkers, children, dogs and owners strolled across the bridge, while still the elderly gent lurked until finally push time could happen.

On through the bridge – and towards New Mills. The sweet factory was in production (sniff!)

but a mile or so further on an easy mooring was found, a few yards from nb Mickey Jay and overlooking the Goyt Valley.

There was time for a brief evening stroll along the towpath, the stone walls edged with the rich colours and dense cushioning of mosses.

Now there’s an unusual sign not far into the Torrs Riverside Park: why would people be tempted to dig holes here…? 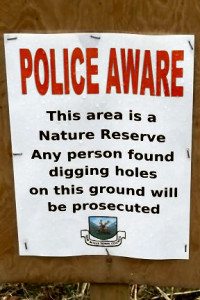 Saturday: It was a brilliantly blue morning; there was no further drama at the remaining (Carrs) Swing Bridge.

Cleddau pootled on along the remaining 1.6 miles of the High Peak Canal, turned left towards Bugsworth Basin and pulled in just before the tap.

This was what the day was about, washing the 60 feet and 6 inches of the boat. Now what would that be in total square footage…?*
Operation Boat Wash swiftly got under way:
Strip gangplank, poles, centre rope and life rings from off the top of the boat

Fill buckets with Wash and Wax

Use Congleton Scrubber(remember, only £3) to brush away at the algae on the gunnels

Use sponge mops for sides and roof

Hose down with fresh water 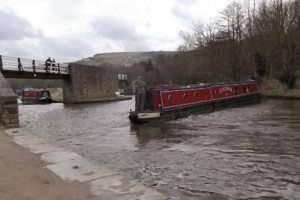 Clouds were gathering, the wind was getting up. Back along the half mile to the Bugsworth Basin entry Cleddau cruised, a turn completed and a return to the Basin made.

Finally Cleddau was neatly tied up in the Middle Arm, a favourite mooring place, tucked away from road traffic noise and passing boats.

Rain interrupted play, or rather, interrupted part 2 of Operation Boat Wash. There’s no point in polishing a boat in the rain, is there!

Will the polishing (ever) get done? Will let you know if it does!