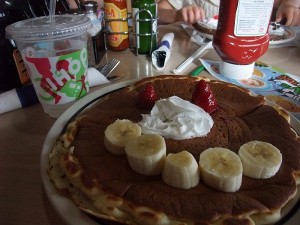 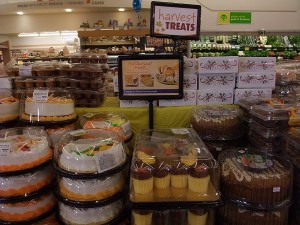 No apologies – but the photos are mostly about food! Whatever else it is about the Thanksgiving Holiday Season brings the Americans' love of food to the fore. So it was not inappropriate to start Tuesday with a treat trip to IHOP – for breakfast. Pancakes are a speciality: Cal Guy went for the banana smile Happy Face, Cal Girl for the chocolate bomb Funny Face, Boatwif went for a relatively modest spinach and tomato omelette while the Captain and the Cal Mom indulged in meat-laden pancakes. Later that day there was another typical American experience: a trip to Edwards Movie Theater, just 18 screens for a city population of 60,000. The film (sorry, movie) was Megamind, with an audience of the four of us and about another six people. The children were allowed a SMALL popcorn box (so that was small! )It was a 3D movie, highly entertaining, preceded by tempting trailers of The Nutcrackerand Chronicles of Narniafor the next holiday releases.

The day before Thanksgiving has similiarities to our behaviour on Christmas Eve: shorter working day, long journeys to be with relatives, frenzied stocking up of festive food from the supermarkets. Neighbours were expecting family from Northern California: what at best might be a six hour drive yesterday became ten! It's probably the busiest time for internal flights, news reports abound of travellers' attitudes to the increased security checks (incidentally, I, though not the Captain, was X-rayed at Manchester). Our family, keen to avoid the turkey scramble around the freezer cabinets, ordered an organic bird online; news was relayed of her slaughter and dispatch, a call was received to check that she had arrived – and she (somehow it had become known as "Mildred") was delicious. Several other tasty essentials were delivered but a time arrived when a supermarket trip had to be made. The shopping list was long, but Cal Girl volunteered to help us out. It was three times as busy as normal, five times as busy by the time we emerged. Shoppers had a particular sense of purpose, the frozen birds, mashed potatoes (in cans) and tin foil trays being most in demand. As ever staff courteously and efficiently directed confused customers to the exact aisle location for every requirement.

We awoke to a cold but bright Thanksgiving; it was quiet, no traffic, no work to go to. Late morning an expedition was mounted to Double Peak Park, a mountain viewpoint 1644 feet above sea-level, about 1000 feet above San Marcos. Other families too were enjoying the excellent wide-ranging views: the university campus far below but only about half a mile distant, north towards high snow-capped mountains, due west to the Pacific Coast, Oceanside Pier and even the faint outline of offshore islands, east inland towards ridge after ridge of hills and steep-sided valleys, south towards freeways, hills, developments. Cal Guy and Cal Girl scrambled over rocks, clambered up the ampitheatre steps, explored part of a trail, climbed into a tree – a perfect work up for Thanksgiving Lunch. "Explain what you are thankful for," directed Cal Mom, and then we all tucked into turkey and stuffing, green bean casserole, glazed carrots, mashed potato and (home prepared) cranberry sauce.  Some hours later we tackled the apple pie and fruit crumble desserts. Then from a cupboard (closet) we took down a large wooden puzzle of the United States: it seemed a most apt way to consolidate our day.

It is one of only two four day weekends a year: tomorrow will be "Black Friday". (Why? Who knows?) There seem to be two essentials: huge discount sales, starting from 4am and the tradition of decorating the house exteriors with "holiday" lights. A doleful discussion was had about some problem at the end of last season with the nodding reindeer: could Grampy fix it…? This could well be a different sort of challenge from clearing debris from a boat prop or rainwater from an engine compartment…

Afterthought: it's no longer there but earlier the Google Search page was headed by turkey and other images of seasonal food: was that so on UK based computers? Do similar festive images appear on UK screens at Christmas-time?