What are the characteristics of the Nen (as in hen and men, spelt Nene) between Thrapston and Northampton, a distance of some 26 miles and 22 locks…

Well, there are bridges (rail and road), locks, chalet and caravan parks – and weedy, reedy waters…

After a quick morning visit to Thrapston on Tuesday (see previous post ) the boats left the Sailing Club moorings, passed easily under the new (and higher) footbridge

and rose through Islip Lock. 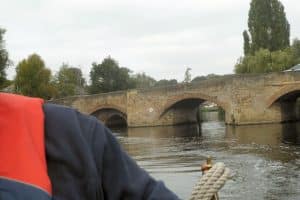 (cruising the Nen now remember, not the Neen), under a long high arched bridge that stretches across the valley,

under a busy modern road bridge (the A14)

and on, climbing through Denford Lock, Woodford Lock, Lower and Upper Ringstead Locks. There are lakes on one side, the fine St Mary’s Church at Woodford on the other. 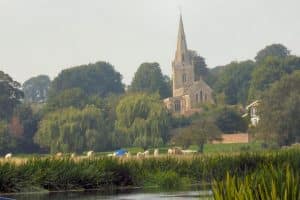 Near a moored boat excited children’s voices came from behind the left bank.  What was going on? The boat was tied up at a FOTRN (Friends Of The River Nene mooring), from which it seemed, there was access to wonderful fun at Stanwick Lakes . From Cleddau’s bow (lower than the view from the stern) there were brief glimpses of adventure playground  equipment. (Boatwif has made a mental note made to investigate this place by road). Then on the opposite bank came the Youth Club camp, and a memory of once meeting a flotilla of canoes here.

An overnight mooring at Irthlingborough beside the one-time Rushden and Diamonds football ground brought back memories from 2010 of the youth squad training session and of The Three Musketeers visitation four years later in June 2014.  The football stadium site looks sad, the services for boaters all gone

and the football pitches overgrown.  The buildings though are obviously in use now, by Citrus Training,

specialists in health and safety training.

Away from Irthlingborough on Wednesday morning,

to navigate under another set of tricky bridges. 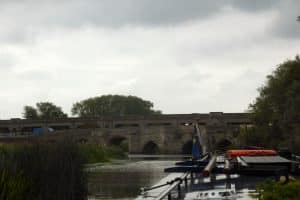 Lock fans might be intrigued by the lower gate at Ditchford: it’s an electrically operated radial gate, the only one of its kind on the Nene.

It was a short cruise then to moor at the Ditchford FOTRN site, a curious place. 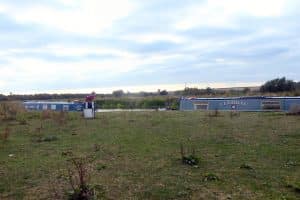 Behind it lies the Nene Valley Water Ski Club. Dotted along the south side of the lake small plots of land had been divided, allotment-like, each plot individually set up for the respective owners’ pleasure. There were trampolines from which to bounce into the water

and slides from the bankside pontoons. 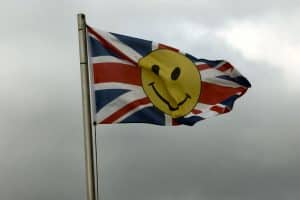 Further along the bank stray horses grazed – this is not the only place along the Nene where such horses have been seen.

Far earlier than usual on Thursday (at 0745) it was departure time,

the boat overtaken by a swan in a hurry …

When there’s a train to catch time cannot be wasted. Ahead lay a pair of rail bridges which carry the main line East Midland route from London through Bedford, Wellingborough, Leicester and Nottingham. A short 45-minute cruise (with one lock) allowed for an Embankment mooring at Wellingborough – and 25 days since leaving Ely on this leg of the return trip to North Cheshire, it took just a 20-minute walk to the pretty Wellingborough Railway Station for a 15-minute rail trip back to Bedford.

Glance at the right moment and you catch a glimpse as the train crosses above the River Nene and, minutes later, over the Great Ouse.

The grapes at home looked good…

Back in Wellingborough mid-afternoon it was time to move on, away from the humming and hissing of the flour mills,

to fight in heavy rain through a couple of stubborn weed-choked locks.

A bright and breezy Friday saw Cleddau and Tentatrice cruise 7 miles through 8 locks from the Manor Farm FOTRN moorings to the pontoons inside Northampton’s flood defences at Weston Favell. On and on, lock after lock, Doddington, Earls Barton, (signs of quarrying on the southern bank), 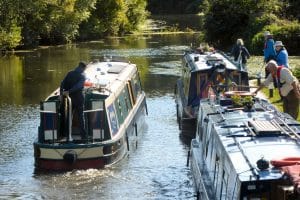 – and another dense carpet of reed to plough through at the lock exit), 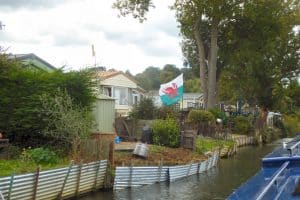 and, what – no cattle on the meadow!), Billing, (the American Auto Club International meet being set up for the weekend )

On the last lap the channel was narrow, shared with moored boats at Northampton Boat Club and a row of huts raised on bricks along the bank.

Through the lock, over the submerged flood gate of the flood defences

and then a squeeze onto the flood pontoon. 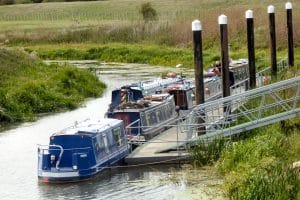 It’s a comfortable mooring, but traffic noise from the nearby A45 can be intrusive. When the flow on the Nene is strong the expansive Washland area is gated to take the excess water and prevent flooding downstream. 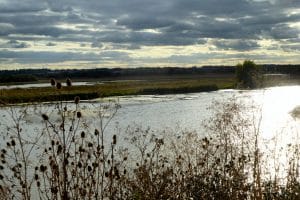 Finally, on Saturday, after passing through the Abington Barrage Gate,

after cruising up three locks and under the A428, Northampton was reached.

It may not be a town with the best of press, but, eyes and ears open, there were curiosities to discover:

The UON building is part of the University of Northampton.

Alpine planted pairs of shoes have been tied to the Becket’s Park railings.

A very fine voice in the Market Square was singing American songs from the 1940s and 50s. 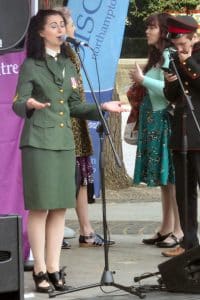 Members of a concert band played ‘Happy Birthday’ in honour of their very surprised conductor. 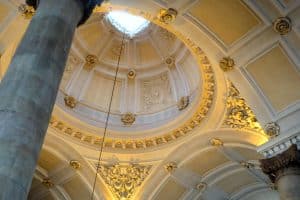 In the Cultural Quarter 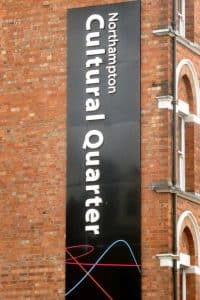 is 78 Derngate, a Georgian terraced house remodelled in 1916/17 by Charles Rennie Mackintosh

Here the very narrow house was extended at the back

and this is the stunning Mackintosh- designed Guest Bedroom.

Note George Bernard Shaw’s comment about sleeping in this room…

As for sleeping, there’ll be none of that during Monday until the 17 narrow locks of the Rothersthorpe Flight back up to the Grand Union Canal have been completed.