Can ignorance be bliss?

Bugbrooke to Norton Junction: 8.4 miles, 7 locks
It was a quiet morning’s cruise, due to be punctuated by a stop at Stowe Wharf for diesel (“No way mate, got 2000 litres of diesel here but the pump won’t work!”) and a quick shopping trip in Weedon Bec. The Grand Union Canal wends its way through the golden-coloured Northamptonshire fields,

sometimes close to the railway line, at other times further away. From the water you see faces of buildings not visible from the road. Near Flore are several attractive structures: a barn conversion, 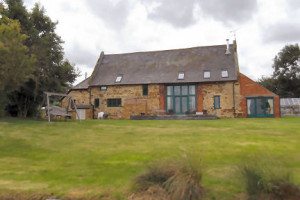 a much extended remodelled warehouse,

a structure with a square squat tower

and a house with a north-facing artist’s studio.

There’s a pleasant caravan park too, where children were playing racket and ball games.

Was it because it was Saturday or because it was holiday time that a three generation group was happily fishing from the towpath? “We, we,” called the youngest boy excitedly, “we caught a dead rabbit!”

In a lock later there was discussion as to whether the dead creature tumbling in the water’s turbulence had been a one-time live rat or a duck.  Majority opinion declared it was indeed a dead duck…
On the Grand Union goes, heading mainly northwards. How pastoral a scene it looks – yet how deceptive is this photograph.

At this point on the left (west), about fifteen yards away the West Coast London to Manchester and the north railway line runs while on the right (to the east) hidden by the trees, but equally close by, is the M1. The noise is intense for ten or fifteen minutes but then (when northbound) boaters focus on the next navigational challenge, the locks at Whilton and Buckby.
These seven locks snake upwards over about a mile and a half. First encountered on a wild and windy day late May in the mid-nineties the Cleddaucrew has never forgotten them: the gates are extremely heavy, some locks have both gate and ground paddles, some have just ground paddles, the back pumping of water can shove a boat where its steerer hadn’t intended it to be and without other boaters to share the workload it can be a tough transit. On that first occasion the crew, despite a deadline to meet, pulled in at the bottom, refuelled the fire and heated up tins of soup to slowly thaw out. Coming down two weeks or so ago it was warm, there was the working pair stranded outside a lock to negotiate round but mainly all went well.
Today?  Both blatant ignorance and total innocence were witnessed…  Locks attract spectators, “gongoozlers” in canal-speak. Cleddauarrived in the bottom lock, 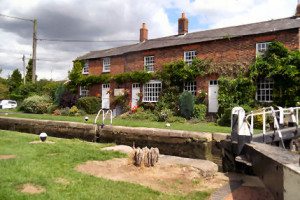 the sole boat as the boat behind was towing a broken down forty-footer.  The Captain threw up his extended rope and Boatwif hastened to loop it around a suitably placed bollard. There was a degree of impatience from the boaters waiting to come down; a crew member wound up the offside ground paddle and the boat swung across the lock. A hefty chap (where was he from?) had materialised at the far end of the lock and proceeded to wind up the nearside gate paddle… “NOT YET PLEASE,” insisted Boatwif, as the boat resumed its swinging and the Captain battled to stabilise it via the rope. With a scathing sniff and a dismissive sulk the chap disappeared down the towpath. Ego hurt? More a case of ignorance of the situation and ignorant behaviour too.
At lock 2 there were no gongoozlers, no helpers, ignorant or otherwise.

The badly balanced gate was impossibly heavy and the Captain climbed up the lock ladder to assist.  Ahead, midway between locks 2 and 3, was a charming sight: white-capped sailors lounging on picnic rugs on the grassy towpath.  As Cleddaudrew out of the lock so too did the sailors draw away on their boat, all twelve of them, all kitted out in black and white stripes and sailor hats.  A boat approached from lock 3 and the sailors (on a weekend’s hire boat) lurched out from the side and made towards the lock. There was a confusion of legs, arms and ropes.

These were innocents abroad, none with canal experience, just one with some dinghy sailing expertise.
“I’m not quite sure what the etiquette is,” said the helmsman, on a trip with friends from Lewes schooldays, he soon to be departing these shores for a new life in New Zealand. While several  “sailors” lounged on the boat rooftop the Captain diplomatically suggested preparing locks ahead.

There was a boathook incident, some squeezing past other boats and finally an arrival at Top Lock. Lessons had been learned; fewer sailors now were sunbathing on the roof, more were offering help – or making for the New Inn beside Top Lock to get a round of drinks in…!
Mid-afternoon Boatwif crept back to the little canal ware shop beside Lock 6.

Stock had been raided by the owner to take to the Blisworth Canal Festival – but nonetheless a satisfactory purchase was made: winter will come but now there’ll be a new coal scuttle on board to replace the old rusted coal bucket.
It was left at Norton Junction for Braunston: a few yards on and a mooring beckoned. There are open views across the fields opposite, it’s a fine place indeed for a mooring…

Tomorrow: through Braunston Tunnel and locks and out onto the North Oxford Canal.