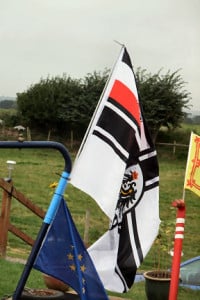 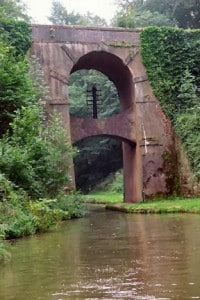 Friday 3rd September: Gnosall to Market Drayton, 13 miles, 5 locks
If you had wondered whether the Captain and the Boatwif fled the celebratory meal early last night – or stayed, well, they stayed until about 2230, wobbled their way back along a very dark towpath, espied the Plough and Venus and somehow got themselves back onto their boat (despite a near trip over a fender by the Captain).
The food was better than average pub grub, but not restaurant standard. The dining area was full, the garden was occupied by burger eaters and the front bar by darts and pool players. Near to us sat a group reliving the horrors of the Stafford Trust hospital failures. Then the musical duo arrived, one in folk garb of collarless shirt and black waistcoat, the other a brown T-shirted techie. The bar became more crowded, a frail old man precariously made his way to a front row seat and others tidied away his sticks. The duo sang and all was well. The floor was opened up to any performer volunteers, house guitar provided if wanted.  Chris from the next table, who’d been so angry about his father’s hospital treatment, got up (a first time, it seems) and sang, Tom Jones style, loud and throaty. “It does get better, honest,” whispered the waitress to me.  Then next was Lynn, all the way from Cannock, and Brown T-shirt man, put down his pint, stopped his twiddling with the sound controls and accompanied on bass guitar.  What magic. The female voice was clear and pure, a delight. Next up Paul: “I’m sorry if I mess it up, I’ve been drinking for three days, I just got a bus pass.”  No matter, his Elvis style rock was strong, assured and well received. Time for Black Waistcoat to sing again and chance to win a raffle… we left, replete, feet having tapped, hands having clapped.
Today’s cruising was to take us to Market Drayton. No locks for miles and miles but embankments, cuttings, embankments, cuttings… and lines of boats, often moored on both sides of the canal, which sometimes is in Staffordshire, at others in Shropshire!  At Knighton the canal passes the wharf from where Cadbury’s dried milk was transported until the early sixties.  The trees have grown up beside the canal and you barely get any sensation of how high an embankment you may be on. With detective eyes we crossed the great Shebdon Embankment, looking for evidence of last year’s disruption. A breach occurred here in August 2009; hundreds of boats were stranded on the wrong side of the stoppage and had to journey either south to Wolverhampton and then north to Stoke-on-Trent and Middlewich via the Harecastle Tunnel or the reverse. But there were no clues as to where the repairs had to be made. They were completed by October half-term but in the meanwhile many canal-dependent businesses were badly affected. Grub Street Cutting is the one with the classic double bridge with mini telegraph pole. In the narrowest of the cuttings moss, ferns and ivy sprout from the rock, the towpaths are often muddy (no cyclists spotted) and a guide warns that you should be prepared to reverse a good distance when meeting an oncoming boat! Thankfully, our reversing antics didn’t occur until later, after the Tyrley Lock Flight.  Reversing for one boat into the bushes is bad enough – but then a second immediately afterwards, well, patience began to wane. At the locks the Captain got into a small world conversation: a Welsh-named boat, the name Cleddau recognised, Aberystwth mentioned: he was a lecturer in the Education Department while the Captain was (or was not) studying in the Physics Department.
Before we reached the locks there was evidence of other birthday celebrations: the Imperial German Navy flag of World War 1 was one of many used to dress an area for a 60th. A little later, two party day boats approached noisily, one for the lads, the other for the ladies, one of whom had just turned 40.
Mid-afternoon, in hot sun, we arrived at Market Drayton, although the town is some fifteen minutes walk away, uphill.  Besides us on the canal a man in a lifejacket tried out his coracle, climbed out, re-adjusted it, and climbed back in.
As for the town: some classic black and white properties, a sandstone church, wedding rehearsal in progress, but dilapidation, businesses which had ceased to trade, businesses which close well before the 5pm official closing time.  As in other towns in hard times the hairdressers and florists seem to thrive, but not much else.  Market days may give a more prosperous feel, but to me it felt like a town in sad decay.
Tomorrow,with no reason to dally hereabouts, we will move towards Audlem.
P.S. Herb health report: Both well: mint used yesterday in a pre-prandial Pimms, basil in an Italian dish tonight.