Friday saw a swifter than usual M6 transit up to Staffs from Beds and well before midday Cleddau was being checked out on her Aston Marina mooring. 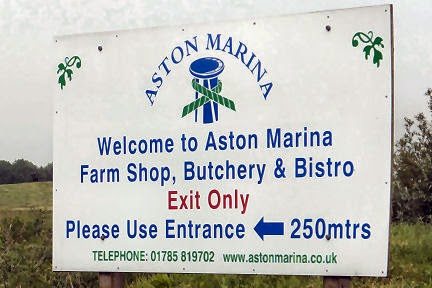 Somehow she looked cramped – the effect of a neighbouring boat moored in what had previously been an empty berth.
There are lessons to be learned from mooring (and particularly for departing from) a large marina:
1. Plan to leave very early – or very late, not around 10am, which is a popular moving off time…
2. Aim not to have to report to reception or the office as that won’t be open until 9am
3. Avoid leaving a marina on a changeover day for shared boat owners
4. Plan your boat movements to avoid holiday weekends…       These lessons are seared into the soul now, as on Saturday morning, first one, then another, then another boat pulled out ahead this morning and began a very slow progress southbound down the Trent and Mersey. At the head of the convoy was a nervous boater who had weaved wildly across the marina and brought fear to the eyes of the boater awaiting fuel at the diesel pumps.

The diesel arrangement at Aston is curious; the pumps are under a bridge midway along the site and boat traffic is directed in a one way system through the marina, under the bridge past the pumps, past further berths and then to an exit at the far end.
The stretch of canal between Aston and Rugeley is stunning.

In the early miles you are aware occasionally of a glint on the other side of the towpath hedge, a ribbon of water which is the baby River Trent.

It was a slow crawl under glowering skies, with long waits at Sandon and at Weston Locks.

Passing through the pretty village of Weston an approaching boater warned of “the swan and your ankles” How right he was – a male swan, super-protective of its new young family, chased the boat, repeatedly lunging with his beak at the stern fender, rising out of the water to fly at low level to keep up with its perceived predator. Only when another boat approached did it redirect its rage to another enemy… (Apologies, no photos, camera batteries failed at that point!)
At Great Heywood (ooh, new building under construction at the canal side Farm Shop)

and the Junction with the Staffs and Worcs

there was chance to trot up into the village and to survey the now broader Trent from the lovely Essex Bridge in the Shugborough Hall grounds.

Mid-afternoon there was a false pause between showers – by late afternoon a massive electrical storm played out right overhead…
“Did you get the storm here?” the Captain asked a tweeded gentleman in a Rugeley supermarket on Sunday morning.
“ Like hell, we did,” he responded. “ Had to WADE through the car park and wear GUMBOOTS into church!”  And there he stood, hearty, rosy-cheeked, smart in shirt, tie and jacket – and knee-high wellington boots.
Sunday proved to be another hat, gloves, gaiters and wind proofs sort of day. It is late May, too late surely to re-light the fuel stove and there is only half a bag of fuel on board. On the other hand during last year’s late May cruising Cleddau’s fire was kept alight from Bollington to Chester and Ellesmere Port and then half way back down the Shropshire Union Canal before being declared no longer necessary.
An overnight mooring at Taft Bridge is always pleasant (apart from the thunder!) The Trent continues its parallel course the other side of the hedge and the dark green hills of Cannock Chase draw the eye south and west.  Alongside the pig farm at Taft Bridge a workboat is moored, a convenient place to top up on diesel and gas supplies.

As the canal heads towards Rugeley the Cannock hills begin to recede,

the train line is closer and the power station begins to dominate the skyline.

The canal soars on an aqueduct above the Trent and takes a sharp left hand turn into Rugeley. There is no typical Rugeley back garden: all styles are represented but the quirkiness of these garden ornaments always brings a smile

and  a  bit further on is this swimming pool.

.
On through Armitage the canal goes (the Armitage Shanks factory

at work today, toilets and wash basins piled on pallets in the yard ready for dispatch); on through the Narrows, on past King’s Bromley marina and through the quiet Ravenshaw Wood, the dense greenery interrupted only by tall swathes of flowering rhododendrons

and yellow flashes of flag iris.

There are three locks to drop the canal down to Fradley Junction,

Gongoozlers stroll the tow paths, peer over the lock bridges

and congregate in and outside The Swan (aka The Mucky Duck) pub.

and a good mooring was found nearby.
At about 5pm the /a rock concert started… Boatwif had to investigate. In the garage of a house on the corner, Watersmeet,

a practice session was under way – although when a young girl drifted out onto the towpath clutching a glass of white wine one wondered whether maybe it was a party for a select few or whether only a few had chosen to attend… How odd it was to stroll through the tranquillity of the nature reserve on the other side of the canal while still hearing vocals, booming and strumming from over the water!  But then, strange things do occur during Cleddau cruises…
Onwards on Monday towards Fazeley Junction and Tamworth.
Total distance to Bedford:  341 miles
Distance so far: 61 miles
Total number of locks to Bedford: 143
Locks so far: 36