So often the Captain jokes that the alarm clock is set for quarter past six in the morning. On Monday night at King’s Lynn it was for real.  Despite a stunning sunset a wind drove the incoming tide hard up against Cleddau’s hull that night. Slap, slap, slap. It seemed to go on for hours and when sleep came it was soon broken by the 0615 alarm.

Final preparations for the cruise (or rather sea voyage) were made. Wash chart, notebooks, pencil, phone, radios all present on the stern deck. Inside the cabin items that might topple or get dislodged were secured. Any cupboard likely to fly open was bungee-strapped shut.

The crews were ready, the Tentatrice Boat Dog had been walked – but the Wash pilot was delayed in rush hour traffic! After an arrival cup of tea the trip could at last begin.  Daryl (Daryl Hill*, see contact details and practical concerns at the end of this post) opted to lead from Tentatrice whose stern deck provides good seating positions.

In a notebook the Captain had prepared a log: at twenty minute intervals the lat and long positions were to be recorded. 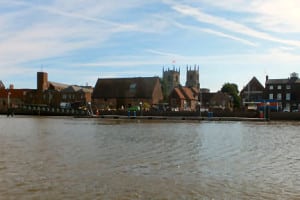 Tentatrice was in lead position, Cleddau followed, Chouette took up the rear.  Past the King’s Lynn waterfront the boats went,

heading out towards the docks and the wind turbine. The vessel that had been piloted in less than an hour before was being unloaded.

By 0935 the river cut had been left behind and the boats entered a buoyed channel.

Ahead the sea sparkled,

Gradually the coastline gained greater definition, several lumps of land higher than others. Heacham and Hunstanton

lay about four miles to starboard.

“Sea State less than 1,” commented the Captain. What better could have been hoped for – no rolling from side to side, just the gentlest occasional pitching.

The boats continued in line astern,

guided by Daryl through the maze of marker buoys. ENE had been the bearing, then there was a turning north. Hunstanton was receding behind and the heading now was for Boston Roads. Cleddau closed in, now just offside from the Tentatrice stern. “Battle formation,” explained the Captain,

course changes being easier from this position.

What is a sea state if less than 1? The blue and yellow county flag, used as wind indicator, flapped feebly. The sea, now glassy, had only the faintest rumple –

you could have smoothed it with your hand! (Captain’s note: Sea State Zero “a mirror-like flatness”)

There were sightings of a couple of fishing vessels, both beam trawlers registered at King’s Lynn.

Four hours out, in the hot sun, white shapes were visible ahead. Buildings on the Lincolnshire coastline…? The shapes distorted, were moving, growing closer.

Soon nine white cruisers surged past, on a heading for Hunstanton.

Marker buoy after marker buoy. The boat speeds had slowed, running now against the tide. The sea seemed to have gained shadings of colour now. The Wash chart shows depths of water coverage over the sandbanks when tide is in and the height of the sandbank when the tide is out. In slow procession, on a north westerly heading, the boats headed towards a yellowing line.

There was a crackling radio message “ … the sandbank where the seals are…” Then came a hand signal from Daryl: Keep your distance. Tentatrice was heading directly for the sand bank.

Forward she went, into shallower water, bow onto the sand. Slowly Cleddau crept alongside – and grounded. Then Chouette,

the third boat, paralleled Tentatrice. All three boats had beached on Roger Sand. 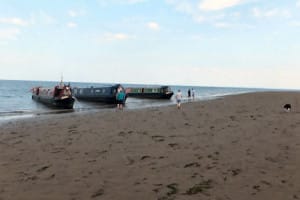 the Boat Dog romped on the beach; the seals cavorted in the shallows; 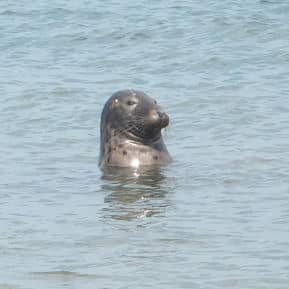 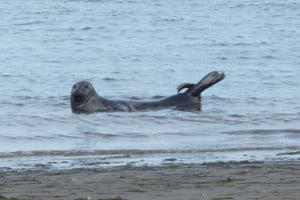 for two hours or so the crews waited, watched, stood about and nattered. Further northwest lay Boston,

the Stump ( the tower of St Botolph’s Church) prominent against the skyline.

As the tide turned crews returned to the boats and eased them backwards off the sand.

Timing is all important.  Note the buoys: past Charlie, past Delta, past Freeman Inner. The boats were gaining speed while westerly sunlight was spilling across the water.

Slowly the shape of the land grew more distinct. Along the Lower Road channel, sandbanks on either side.  There was Tabs Head to look out for.

Here the channels divide, River Welland to the left, the New Cut to the right.

Local knowledge is crucial here to identify the channels and to gauge water height at Boston’s tidal lock. Cows grazed on the muddy left bank, terns swooped overhead. . “Keep an eye on the longitude,” urged the Captain. And then, just at 1816 there it was:

Back into the western hemisphere!

The rising tide was racing now and a stiff headwind broke the calm: salt spray splashed on the cratch windows

and the boats pitched in the choppy swell.

Pylons, masts and the docks lay ahead.

The river ran alongside seriously high walls. Cleddau rounded a twist in the river’s course, passing an imposing vessel.

There were small craft laid up on mud, the local fishing fleet tied up.

the river snaking its way through the town.  Past the famous Stump,

at last to the Grand Sluice Lock. Bang on time.

Waters were level – River Witham and safe moorings ahead, tidal water behind.

After an extraordinary day the three boats and their three jubilant crews had arrived!

Ever thorough in his preparations the Captain had earlier secreted a bottle of something bubbly into the fridge – boats tied up it proved a refreshing drink after thirsty work! And just downstream the setting sun glowed over the Boston Stump.

What ‘the Captain’ did in preparing for a Wash Crossing:

Checked that had maps for Great Ouse and the River Witham

Lowered cratch and sealed it to prevent wave incursion