Clocking up the miles on a clockwise route

along about 11 miles to the summit at Gailey.  Initially it is the railway line that shadows the canal 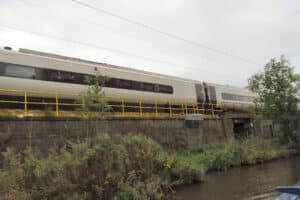 – and then the railway crosses the canal and swings north. ….

Soon though the sound of road traffic from the M6 becomes a background sound.

Some of the locks have wonderful names: Shut Hill Lock, Bogg’s Lock

A pretty place is Acton Trussell – and it was at a bridge hole just south of the village that a surprise third Monkton Moment * occurred.

”Cleddau, that river goes through my home town – ‘Av’fud’west,” called the young man from the back deck. Like ships that pass in the night the boats drew apart and no more conversation could be had!

With holiday options severely limited this year by the Covid -19 crisis canals are particularly popular – and queues at locks a regular feature of the day.

There are anglers too, both real

Houses are always interesting to look at, houses for humans that is,

as well as houses for ducks…

There was a night stop at Penkridge, a well kept and proud village.

And then 6 more locks to the summit at Gailey

The hedges are ablaze with red berries

and beware mooring under an acorn-laden tree. (Acorn and oak tree lovers see references to ‘a mast year’ here:) 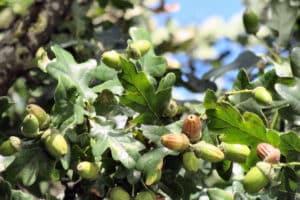 On this attractive canal weaves, past a couple of marinas, through farm land,

past a chemical works, through more farm land,

under the M54, eventually, on the outskirts of Wolverhampton, to The Narrows. Passing along this way feels as if you need to take a deep breath – and to hold it for a long time until you reach air and space again some half mile later. Luck was out though – Cleddau ran out of air and space half way along.

The canal broadens then into suburbia and Autherley Junction. There’s a 90 degree turn under the graceful bridge

to proceed north on the Shropshire Union, heading for Chester.

in September it seems inconspicuous!

The Shropshire Union – who lives in these parts, one might wonder, witches 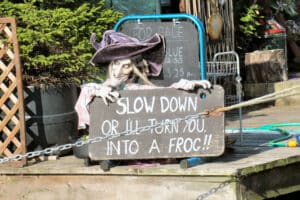 An overnight mooring at Wheaton Aston was to put Cleddau within a morning’s distance of Norbury Junction, this after filling up with “the cheapest diesel on the system” at Turner’s garage. There was an 8am start down Wheaton Aston Lock

Northwards, then. The canal threads from south to north, on embankments above fields,

the canal then emerging into the pretty village of Gnosall..

It was a good reunion, joined by chance by passing former boaters, Carol and George of wb Still Rockin’ .

Wow! Did this make The Airhead Society formed back in January 2015 at Cowroast quorate?!   Thoughts and fervent best wishes of course are with dear Jaq, formerly of nb Valerie , now living in the US amid difficult wildfire conditions in Oregon.