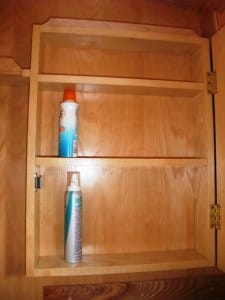 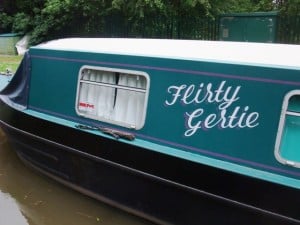 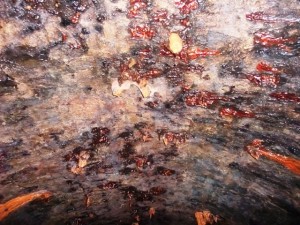 “What was so wonderful about Wayne?” asked a friend last week, referring to the blog Cleddau on a test cruise. We were ecstatic about his ability to translate our bumbling ideas for a bathroom wall cabinet into a made-to-measure cupboard. See photo as evidence.  Last thing last night the camera was picked up to record the appearance of the front door and window customised bungs and screens, which are proving effective blackouts at night. But canal structures too have been “customised”. At the bottom of the Macclesfield Canal, at Kidsgrove, the canal crosses the Trent and Mersey Canal  on a fine stone aqueduct; from it you can just see the start of the Cheshire Locks, which in pairs, (pairs due to the amount of industrial traffic) lower the canal down Heartbreak Hill towards Sandbach and Northwich.  If you are inclined to marvel at motorways swooping over each other then you would marvel at this too.

Just after the aqueduct Cleddau cruised past Flirty Gertie; you cannot help but smile at such a delightful name.  Then comes the end of the Macc; a sharp right turn (and a single long hoot of the horn) was needed.  Within a few hundred metres we were at the northern portal of the Harecastle Tunnel. Here the water has its characteristic orange colouring (sorry, more orange than red) caused by the ironstone leaching through the tunnel rock.  These days boats are checked into and out of the tunnel by tunnel keepers, a convoy of up to eight boats at a time in one direction only.  Create as much light inside the boat as possible and keep the curtains open is the advice.  Once all lights were switched on Boatwif reported for duty on the back deck.  We were number three in a convoy of five. The nav lights used for the Bedford River Festival last year provided light at the the stern. But additionally the Captain had dug out a small clamp spotlight. What a difference it made – to see the neat tunnel brickwork, notice the stalactite formations, observe the rich colours seeping from the roof, and even read, somewhere in mid-tunnel, the Hull University Rag Week sign sprayed on the wall! The transit through takes about forty minutes, during which time taller beings need to be cautious about head height and deck crew should don waterproofs!

Cleddau‘s overnight mooring is at Westport Park, in Stoke-on-Trent. Here now is a pleasant lake; once it was derelict and flooded mine workings.  Our neighbours are thirteen other boats and a huge flock of Canada geese jealously protecting their fluffy offspring. It has been a very blustery day and occasionally the mind has strayed back to events exactly a year ago.  Then Boatwif was dressed in smart togs for a niece’s glorious wedding. As for today’s fashion garb – light weight trousers, hip length T-shirt, topped by button-through fleece cardigan and accessorised by winter weight waterproof jacket, fleece-lined mountain cap and SealSkinz action gloves, an outfit customised for breezy boating!

[Footnote: Webmeister Techno Son-in-Law is again providing map locations: should the text not match the location it’s because he is camping in Ketchup (see Puddles, Paddles – Persistence, 10th September, 2010) in the Cotswolds  and is therefore using mobile gadgets.  He has sent a text to say that the tall white flowers pictured yesterday at Dane-in-Shaw Pasture were indeed ox-eyed daisies.]