From Stone to Tixall Wide – simple, just 10½ miles and four locks. Why then, did a trip that can be done in four hours take nearer six?

South of Stone the properties have expensively furnished gardens. 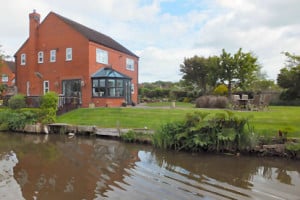 A few years ago the Cheshire One, during an elephant phase, used to delight and giggle at the sight in a local garden centre of a massive glossy elephant garden feature, water spouting from its trunk. It would be viewed often, until when the recession bit, such opulent pieces disappeared from sale. Its price was something like £1400 – and there’s one in a suburban Staffordshire garden!

It was a sunny though windy day on Wednesday and boats were on the move: There were half-term hirers. There were private boaters – and there was the Armada from the Wolverhampton Boat Club. These boats, a dozen or more, all flying their yellow boat club pennants, 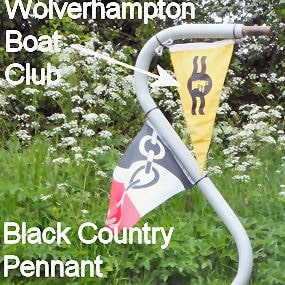 had cruised up to Stone, turned round and were on their return journey, heading for a mass gathering at Tixall Wide. Their website bills it as the Commodore’s Cruise. With only one boat passing through each lock at a time, waiting lines of boats built up above and below the locks. “That’s all too slow for me,” muttered a walker at Aston Lock, “I’d want my lunch!”

Then there were the contractors. At Aston Lock (note, here 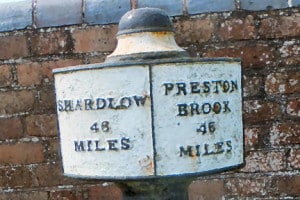 is exactly midway along the Trent and Mersey Canal) the cill marking was being freshened up. 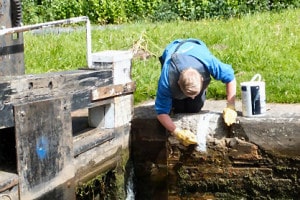 Just beyond Aston Marina serious work was going on: 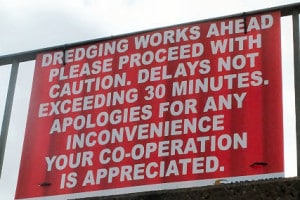 contractors were dredging silt from the canal bed, 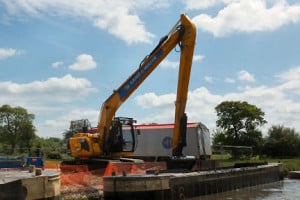 and, look closely, using canal water to wash mud off the back of their lorry. 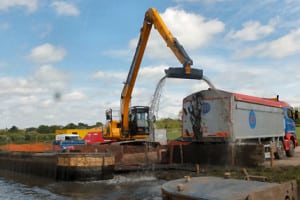 There wasn’t a thought at this stage that queues and cranes were to become the dominant features of the next couple of days. On a bit further, Cleddau passing oh so slowly, a dumb barge was being  hoiked out of the way by a mini-earthmover on the back of a workboat. 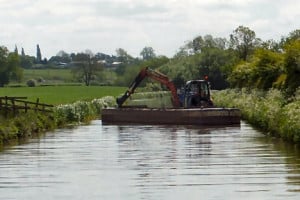 “Mad idea this!” said the safety supervisor from his little boat, “doing all this work during a Bank Holiday week and half-term…”

It remained breezy but cool.

There were fields of bright buttercups 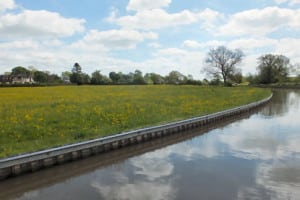 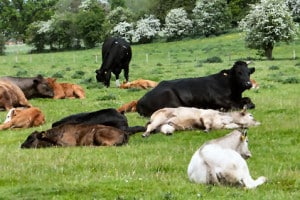 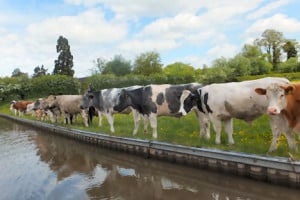 At each lock conversation resumed with the boaters just ahead. 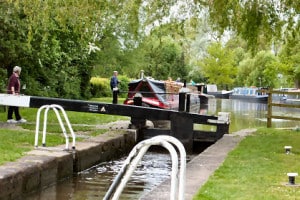 Each boat’s history, cruising plans, battery capacities. There was a sign at Sandon Lock (isn’t that the pub booked for Saturday night…?) 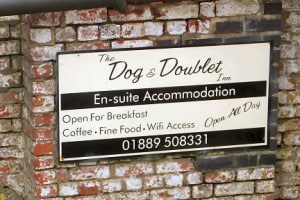 Word was beginning to filter back up the boat queues: the Wolverhampton Boat Clubbers were heading for a mass picnic – at Tixall Wide… Would there be mooring space left for those at the end of the lock queues? 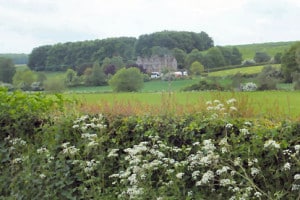 fresh greenery rising on the other side of the hidden river’s course. 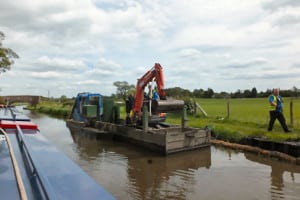 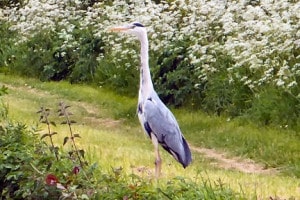 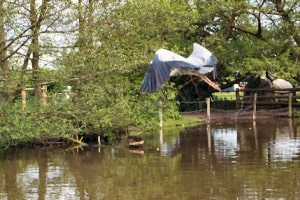 fished and flew. Shy, it would take off as soon as the boat drew level and then down itself just yards ahead.

Four locks done attention was paid to the entrance at Great Haywood Marina; 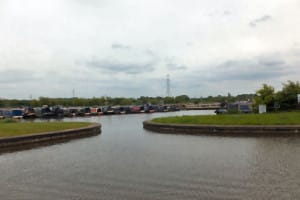 manoeuvring through that was to be a task for Thursday. There was just a mile to go, past the Farm Shop and cafe, to Great Haywood Junction. 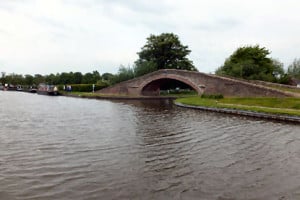 Here is the sharp right turn (if coming from the north) onto the Staffordshire and Worcestershire Canal. Over the Trent Aqueduct  the canal passes, 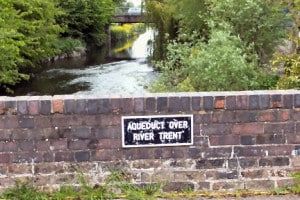 along a wooded straight to where the channel broadens out. Tixall Wide, dug out in the late 1700s to look like a lake so that the sight of working boats would not to offend the sensibilities of the local landowner, is a broad and beautiful expanse of water.

There is room here for many, many boats to moor – but the Boat Club members were installed, even breasted up. 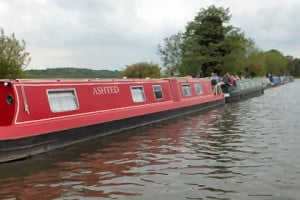 Their brave souls were pitched on picnic chairs on the towpath, wrapped in fleece blankets against the cold. A bar table stood between the boats – if this was the Commodore’s Cruise was the drinks bill his too?!  Then, what luck, just one last spot remained, 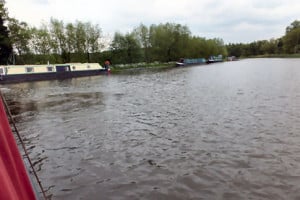 just enough for Cleddau to squeeze into and tie up. 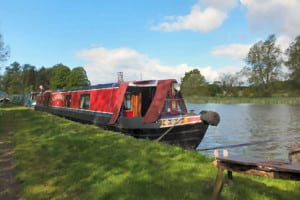 There are times when the cruising has to stop so that a trip home can be made. Hence Thursday involved a short trip back to Great Haywood Marina, some crane-gazing as a boat was delivered by road to be put into the water at the marina, 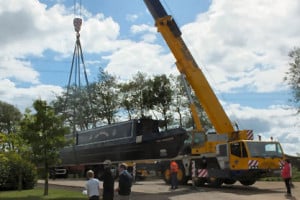 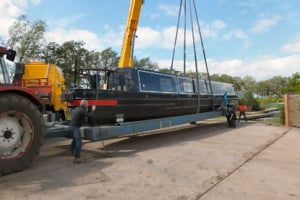 a hire car from Stafford, cranes galore at the M6 /M1 Junction and serious stationary queues southbound on the motorway.

Saturday required an 0800 start from home to allow for motorway go-slows and a return trip to Stafford.

The day (and Sunday too) brought a succession of very welcome visitors to Cleddau. First were Tim and Janice, Stafford residents, linked by marriage to the Captain, and conveyors of the Captain back from Enterprise Hire to the marina. Thanks very much both, it was a fantastic help.

Later, bearing home-grown gooseberries, came Patrick and Angela, of nb Chouette, third boat in the Wash crossing flotilla last year. It was brilliant to catch up again – hopefully the boaters may coincide later on further south… (and thanks for the gooseberries).

Later still came the Tentatrice Captain and First Mate, staying in the area with Chris and Jane. “Would you like some Staffordshire oatcakes for your freezer?” had been the message. There was a jolly though noisy meal at The Dog & Doublet – and late night coffee for six back on board Cleddau. (Thanks for the oatcakes, Jane, now singly wrapped and frozen.)

Heavy rain and strong winds on Sunday didn’t aid the return to Tixall Wide. Just on mooring up there was a call from the Cheshire Mum. “We’re at the Treacle Market in Macc,” she said.

By mid-afternoon was the boat sitting lower in Tixall’s water…? The Cheshire Three had arrived, eager to share their Treacle Market specimens and holiday photographs.

Photo browsing and lardy sharing done they left – and left the oatcakes too! 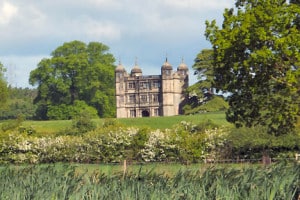