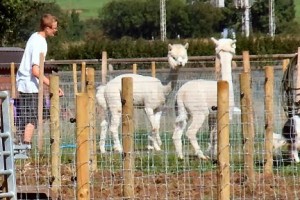 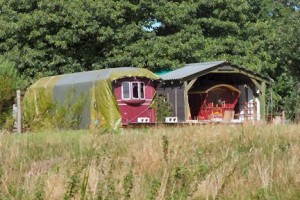 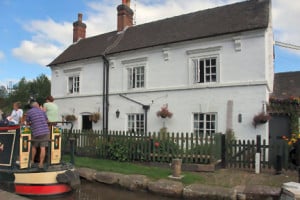 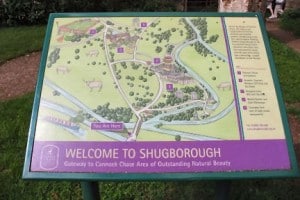 Monday 30th August: Rugeley (Trent and Mersey) to Tixall Wide (Staffs and Worcs): 6 miles, 2 locks (much queuing)
I never quite understood that line in a poem “the last dog days of summer”, but I took it to indicate lolling about, lazy, quiet, warm. An internet trawl would probably put me right but this seems a suitable title for this sort of day.  True, there was early(ish) activity when the Captain (in his role of Catering Officer) raided the shelves at Rugeley’s Morrisons. He made two trips – and it’s amazing what can be carried in a rucksack and a couple of double strength Sainsbury elephant carriers!
So later than usual, but still not yet mid-morning we left the suburban gardens of Rugeley and headed west. Very soon there was our first glimpse of the River Trent running parallel but below the canal. The sky was blue, the sun and moon both visible, just a hint of a chill in the air – and it was still. No winds raged about our heads, no trunk roads assaulted the ears and what trains there were made no intrusive roar.  This section of the Trent and Mersey is absolutely glorious, tree covered Cannock Chase rising to the left, small pretty houses, some large houses with private moorings, a good life set-up with alpacas (?) and pigs, fields, signs of gypsy caravan restoration, occasional copses on the right. At Colwich Lock memories flooded back: two years and a bit ago, when moving the boat as fast as possible from Newbury to Macclesfield so as to attend a Lancashire wedding, a helper had appeared just here. She was heading for Lincoln from Reading, tracked our progress, diverted her route and appeared upon that lock side and earned her supper!  Progress was slow at Colwich today, two boats ahead of us. But a pretty lock side house and garden to gaze upon. On then another mile or so, past landscaped parkland, sheep gently grazing, and then a first view of gracious Shugborough Hall. Cyclists, walkers, moored up boats, warnings of queues ahead at Great Haywood Lock. But what did it matter? Shugborough Hall and Staffordshire Way information panels to read, the air balmy, crews helpful, tourists, a tea-shop, its garden occupied by cheerful customers. Have windlass, will use it. One up, one down; another up, one down; then in sailed Cleddau, paintbrush and pot perched on the front locker, the Captain having attended some of her scrapes meanwhile.  Above the lock a longer queue, six boats waiting to go down, many moored up, private and commercial too: a fender maker and an embroidery designer. Great Haywood Junction: straight ahead for the Potteries but left to Wolverhampton. Onto the Staffordshire and Worcestershire Canal we cruised, across two short aqueducts and within a mile were at this special place, Tixall Wide.
On Cleddau‘s first long cruise (some sixteen or so years ago) we came upon this spot late one afternoon; a boat ahead pulled out, we pulled in – and were amazed. Where else on a canal does the water stretch so far across? Where else do you have such pleasing views over a shallow valley and gentle hills? We vowed that any future cruise along this route must allow for mooring here! You can still see an Elizabethan gatehouse: when the canal was created the landowner insisted that the canal be disguised as a wide lake. Now the sun is warm upon the front deck. Earlier I strolled alongside the line of boats, the bow occupants then were reading books or having tea and jam or doing a crossword or listening to flute music or drinking red wine, all quietly soaking up the sun’s rays in a gentle sort of way.
But “dog days”: you cannot help but notice the huge dog population associated with boats and towpaths! Although all shapes, sizes and sorts the preponderance seems to be either very large or very small. Great hounds and very large Alsatians were being walked near Shugborough this morning; a small terrier was snatched and swung airborne via a long lead on the towpath near here. But what intrigues is the number of fatter, largish, usually black dogs you see now “dressed” in Boatman’s neckerchief.  We followed the fortunes of one such Bridie today, on/off her boat, but mostly off, preferring “off” it seems to “on”.   At the Junction she was slow to rejoin her boat, got confused, tore onto other boats to try and jump, but could not see the direction that hers was to take. Eight or so adults helped persuade her to cross the bridge – and head down the right towpath. She ran, she barked, she ran, she dived, she tried to swim aboard. I didn’t see how finally dog and boat were reunited. A final dog reference: a boat  bearing the name Dashund Carrying Company just passed by, two dashunds resting on the roof. Dog days indeed.
A theory the Captain is developing is that male boaters sport a greater percentage of beards than the rest of the male population.  Whether it can be proved or not is immaterial. But while the Captain here (unbearded) was doing some stereotypical boaty things this afternoon (brass polishing) I came across another boater – male – bearded – and carrying a tiny kitten!
Tomorrow – the plan heads us for Penkridge.