Downhill to Middlewich, then a sharp left turn

The boat trip to Llangollen continues.

Boating is great but occasionally, just occasionally, it’s good to go ‘off piste’. Moored still on the Macclesfield Canal at the Ramsdell Hall Railings Boatwif and the Tentatrice First Mate ploughed across the fields (and the odd cow pat) to Little Moreton Hall.

It was not the first visit for Boatwif, nor the first guided tour.

Viewing  the long table in the Great Hall leaves you impressed.

It’s called the Board and is hugely significant. It’s about 500 years old; the Moreton household ate at it and conducted business at it. The reverse side has games laid out on it. From it has come the expression Board Meeting  – and, a favourite explanation, it used to be taken outside to the courtyard, rested on trestles where it formed the board (or stage) that travelling players would use to perform upon (hence “to tread the boards”).

After a glorious sunset

Cleddau and Tentatrice set off on Tuesday morning to join the Trent and Mersey Canal at Hardings Wood Junction – and to start the 31 lock downhill cruise to Middlewich.

A pause at Kidsgrove (for a Tesco shopping opportunity) was viewed with interest by two local lads. (Is the word “urchin” non-PC these days – certainly the one in shorts had the requisite grubby knees).

“Is that yours?” said one, eyeing up the Captain attaching a metal safety hook to the mooring rope and the piling.

“Well, yes it is,” the Captain replied.

6 locks down these Cheshire Locks are the delightful moorings at Church Lawton.  Would there be space there – but, surprise, surprise, the entire length of canal, was empty of boats. The boaters tied up and settled in for an evening’s pleasant rest.  At about 7pm a boater cycled past, spreading alarm and consternation. “Pound’s down,” he said, “and the lock gate’s leaking badly.”

It was true, the water level had dropped noticeably. The two Church Locks were about a hundred metres ahead and there the leaking gate was inspected. Would it hold? Would the pound above in which the boats were moored lose water overnight and the boats end up sitting on a muddy bottom?

A hasty conference; a snap decision.

The boats were untied, moved down through the Church Lock pair – and moored up again at sunset.

Next morning revealed just how much towpath greenery there was!

Before moving off there was a walk back to Church Lawton to rediscover the woodland paths and Lawton Hall Lake.

It was a surprise then for the first time to come across the church doors unlocked and the building open.

Inside is a light and airy space; 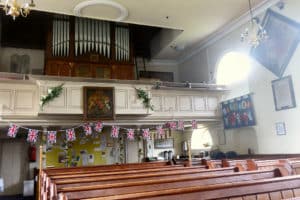 union flags are suspended along the altar rail and below the organ gallery while colourful banners offer friendship and spiritual support.

This canal route is familiar: the canal falls ahead down to the Cheshire Plain, often via paired locks. Glances over the right shoulder remind the boater that Mow Cop, the folly so noticeable from the Macclesfield Canal, is still there – and familiar too are the fields of beef and dairy cattle.

It was at Lock 51 that there was another familiar sight: here was Mary, selling her homemade produce

and textiles for Great Ormond Street Hospital and the local hospice.  In 11 years she has raised £20,000. What an achievement! (See here for photo of her in September 2014). Purchases this time included jams, a chutney and a hand-knitted headband.

An overnight mooring above Lock 57 brought much reminiscence. Long gone and derelict now is The Romping Donkey.

Mourned more though is the one-time excellent bistro at Lock 57, now a four bedroomed house up for sale.

A quiet spot, midway between Sandbach and Middlewich became the location the next night for a pre-birthday celebration. (Instead of counting sheep as an insomnia cure try working out where each recent birthday has been spent…) It was a fine celebration!

Thank you Tentatrice crew for a splendid evening.

the Albion Lock development (Middlewich outskirts) is progressing too.

Salt mountains can still be seen behind The British Salt Ltd works.

But what was particularly interesting was activity at The Kinderton Arms, a pub long closed opposite Rumps Lock.

The window painter (who lives in this former bus)

Navigating through Middlewich is rarely straightforward. Somehow the jumble of boats below King’s Lock sorts itself out,

some boaters waiting for fuel or for servicing, some transiting through on the Trent and Mersey Canal, some turning sharp left or sharp right onto the Wardle Canal and up through Wardle Lock for navigation on towards Llangollen or Chester. This was the route for Cleddau, up onto the Middlewich Arm of the Shropshire Union and about four miles on was a stunning mooring spot. A view over Winsford Flash from the gallery sink is special indeed.

A 100% probability of rain was forecast for Saturday – and how accurate it was!  The route across the Middlewich Arm is delightful, lush green dairy pastures, large farmhouses, all with substantial farm outbuildings, the West Coast railway line and two large marinas on the western end. (Apologies: heavy rain and camera are not ideal companions).

Left at Barbridge Junction to moor up

a couple of miles later at Hurleston Junction, 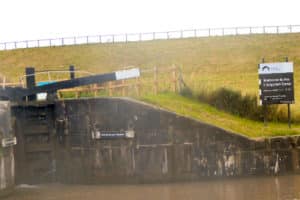 the entry point for the Llangollen Canal. Here a mail drop is expected on Sunday: the Cheshire Three are promising carrots, newspapers and maybe even a birthday card…

Finally, has any boat work been done in recent days? Well yes, In the ongoing struggle against age and water the Captain has installed a mega-sized bilge pump,

which should, if required, pump out 2000 gallons of water per hour. There has been some polishing too

and there are plans for an additional new engine room shelf…