Cleddau and crew left the Macclesfield Canal on Tuesday morning to start their descent down the Trent and Mersey Canal to the Cheshire Plain.

In 7 miles between Hardings Wood Junction and Wheelock  there are 26 locks. Many of them are paired single locks. One lock down and the canal flows underneath the Red Bull / Poole Aqueduct, on which Cleddau had been moored the previous evening.

Though several of the single locks in a pair are out of commission boaters can often find themselves meeting and conversing with others who are travelling in the opposite direction.

It wasn’t long before upcoming boats were being met.  “We’re doing the Four Counties…” was an announcement made several times, usually by an exhausted crew member. Where they (and their boat) had come from and where they were going to all seemed one almighty blur…

One hired boat was to be returned to Gailey at the end of its Four Counties Ring cruise. “You’ll be going past Tixall Wide then,” Boatwif said conversationally to one such boater.

Twice in the downward trip there was another sort of exchange; in both cases unfamiliar flags were being flown at the stern. *It is from our home town in Switzerland,” explained one boater. An hour later from another boat came: “Our flag is our home town in Holland.”

While tiptoeing, lock by lock, down Heartbreak Hill views of the Mow Cop folly to the south east remain visible for several miles. Here from Church Lawton,

Between Red Bull Locks and Church Lawton is a large dairy farm – and hadn’t the fruit trees planted alongside the canal produced a magnificent display.

There is something very satisfying about working down this canal. Occasionally boats cross at the paired locks, one going up in a lock, one going down.

As ever there are new structures to comment upon 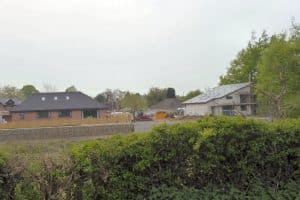 – and older traditional lock side buildings to admire for their colour and charm.

Cows: typically the fields in these parts are occupied by black and white dairy cattle; there are tan coloured cattle too – and nearer Middlewich is a field of all white cows, probably Charolais cattle, a breed of French origin, raised for their meat.

After 5¾ miles and 16 locks (with a lunch break at Rode Heath) the first day’s downhill cruise ended at Hassall Green, on moorings before Lock 57.

Ah, Lock 57: some must have known that the delightful Lock 57 bistro was going to close:  Its demise a few years ago is still lamented each time this way is passed… Now Lock 57 is a private residence

– and, for those who know this canal stretch, the derelict building very close by that had once been The Romping Donkey pub is now being rebuilt, some of the original structure still apparent…

A late afternoon stroll was a reminder of a previous wander: the pink St Philip’s Church

and the Salt Line trail.

Once Lock 57, the actual lock, is reached there’s a compulsion to keep going, under and away from the roar of the M6 motorway.

that featured here  in December 2017 when the downhill ice-breaker of a trip was done as crew for Jaq on nb Valerie. . Onward, down brick-lined lock after brick-lined lock.

(Remember how the Bosley Locks on the Macclesfield Canal’s are lined with stone blocks, 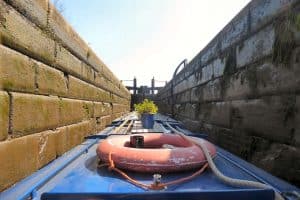 the stone quarried from the Cloud).  If there’s chance at Malkins Bank (between locks 62 and 63) sneak a look into the side arm to see if there are any old traditional boats tied up there.

A quiet overnight mooring, opposite a well-loved organic market garden near Ettiley Heath,

To Middlewich on Thursday – 5 miles and 8 more locks. Once past pretty (and prettily named) Crow’s Nest Lock

there is evidence of industry as well as new housing.

(Just why is this housing estate called Albion Lock when the locks nearby are the Booth Lane Locks? Is this to do with marketing rather than authenticity?)

In the blustery conditions thoughts turned to chimneys. Were there new chimneys at the salt works?

Then, creeping slowly under Bridge 165, came a boat.

There is a yellow warning sign on the bridge support.

“Better watch out for your chimney,” the approaching boater called.

On, past the salt works,

and the forlorn looking Kinderton Arms opposite Rumps Lock, its role as a Thai restaurant apparently over now.

Down through King’s Lock, then onward again, towards the Middlewich Three Locks.  There’s a fine piece of public art here now where the vertical planks portray the waterway’s history and the locks are shown as steps in the water.

Cleddau had reached Middlewich, not for the first time.

It was here, remember, that Boatwif had an extended stay in May 2016, abandoned by a duty-bound Captain who tore off to answer an OfSTED call.

After the three day downhill trip there was a feeling that perhaps the town too is going downhill. There are plenty of hairdresser salons, barber shops, the odd tattooist and several card shops but other premises seem to have closed. Worst of all the Tesco Superstore in Southway has closed (July 2018) and been replaced by Jack’s, a Tesco budget store, which has been opened since last October. The Tesco Express store is still open – and its footfall felt far busier than in Jack’s…