So, along the Hall Green branch Cleddau pootled, photographing Flirty Gertie of course, 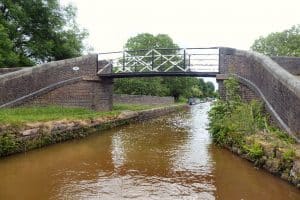 continuing across the aqueduct above the Red Bull Locks 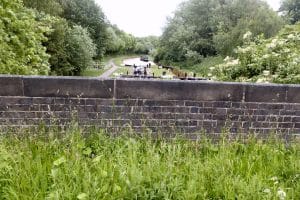 at the top of Heartbreak Hill – and up to Hall Green Lock.

Pippi Longstocking was ahead

but soon the colourful cottages of Scholar Green were in view. 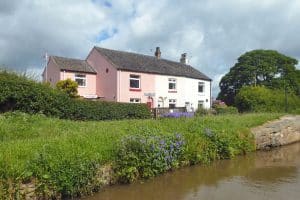 The redevelopment of some workshop buildings near Heritage Marina continues – it’s looking now like a terrace of waterside homes. Nearby the Chouette mooring was empty – but there was news that boat and crew were not far away…

Soon the lovely Ramsdell Railings were in sight

– and it’s not often that the mooring space here is completely empty. It was a clear day and the hills the other side of the Cheshire Plain could be seen

(Beeston Castle is perched on a rocky sandstone ridge over there).

Onwards, under a succession of beautifully curved stone bridges

on the slow crawl towards Congleton.

Not far past the Astbury golf course a familiar shape loomed into view,

Chouette. Stern to stern there was a catch-up session

– it had been all of three weeks since meeting the Chouettes a long way south on the Gloucester and Sharpness Canal.

cars whizzing below. The bridges 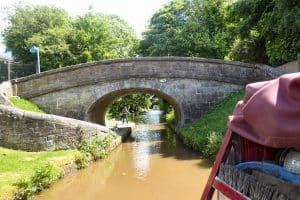 and aqueducts and scenery of this canal were weaving their own familiar kind of magic. 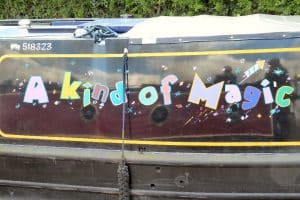 The sharp shape of The Cloud appeared to the right, 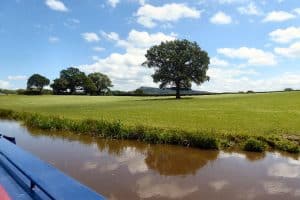 – a pause was made here to plant a daffodil in memory of a dear friend. 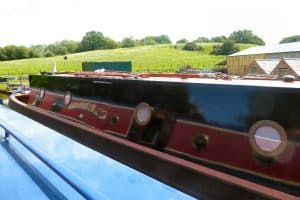 Decision time approached: to moor overnight at the bottom of the Bosley Twelve – or to press on upwards while the skies were dry…? No compromise was possible, it was 12 up there and then or 12 up the next day, probably in rain. Up then, 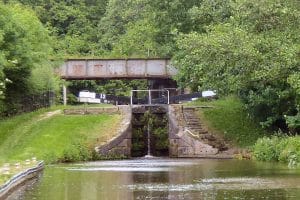 emptying 10 of the locks before being able to proceed. 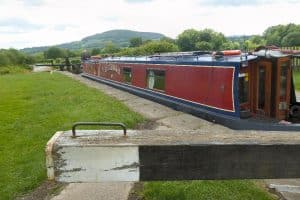 Moored at the top, far from roads or rail, a quiet evening lay ahead. 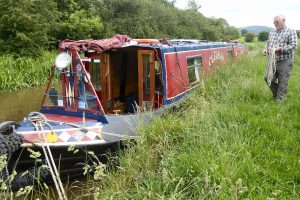 Several hours on Boatwif thought to text a position update to Techno Son-in-Law and Cheshire Mum:

“Moored tonight above Bosley locks. Should be tied up back at Victoria Pit tomorrow”

“Liked” was a reply symbol from Techno Son-in-Law.

Not given to constant phone screen browsing it was a while later when these words and a picture were spotted:

“Cool abi” (that response came from Cheshire Mum who was away down south).

“So where’s that then” Boatwif wrote back – and when next she looked at the screen there was this photo, a red boat and two grinning Cheshire cats. 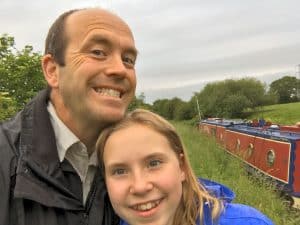 The text messages had been continued:

“Does it not look familiar?”

“We are getting wet”

In a tired brain a penny dropped!

The cratch was unzipped and Boatwif peered along the length of the boat. There, by the stern, were the two bedraggled giggling Cheshire cats. They had trekked along the towpath and waited to be spotted. After clambering on board and providing a day’s worth of news, they disappeared again into the gloom – after all, it was a school night…

“Finally!” was Techno’s last screen word, spotted only after the Cheshire cats’ departure! 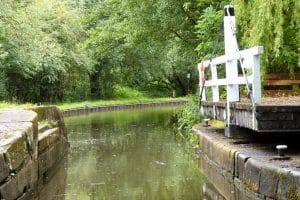 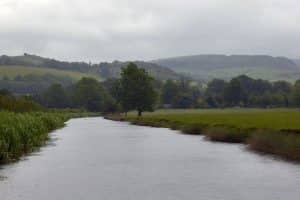 on the approach to Gurnett Aqueduct. Walkers huddled for shelter under a bridge 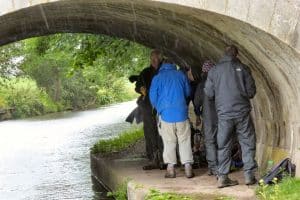 while half a mile further on, despite the rain, a work party was repairing a collapsed bank. 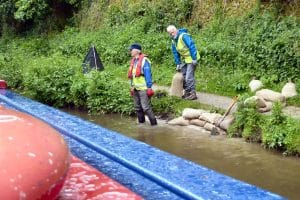 There’s work of a different kind on the site of the old transport fleet in Macclesfield and progress on the development at the Buxton Road wharf just past Hovis Mill.

On, past pretty gardens, on past AstraZeneca’s manufacturing plant, on towards Kerridge and into Bollington. There opposite Adelphi Mill 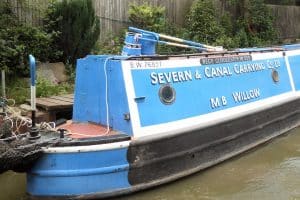 a boat that in recent weeks has journeyed 553 miles from Cambridge via London (where it served as wedding transport) and via Birmingham, all the way to Cheshire. Good luck to the Willow crew as they settle in to life in Bollington.

Last cruising day – and last chance of a waterside lunch… There was space to moor on the aqueduct opposite Clarence Mill; the café was open,

a window seat was available and on the menu was Green eggs and ham. If you’ve ever encountered Dr. Seuss’s book Green Eggs and Ham you’ll have liked it or loathed it! As for the menu option it certainly gained the approval of the Cleddau crew…!

Just a few more familiar miles to go – and then at the familiar winding hole a little bit south of Bridge 15 there was activity, 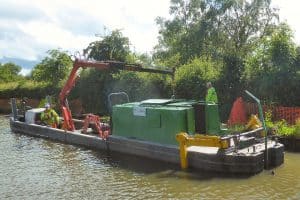 a three week project to repair the much eroded towpath bank.

The diesel tank was topped up at Bailey’s Trading Post and then it was just a few more yards to Cleddau’s home mooring,

88 days after leaving in the middle of March.

432 miles just for a walk on the Severn mud banks! On the way, though, Lichfield was discovered – and the Ashby Canal was a new-found delight – and the plays at Stratford were memorable – and the Avon Navigation is easier now for boaters – and…  and… and…

That’s the thing with life afloat on the inland waterways, there’s much to see and do!