Floating back through time

Take Stoke Golding for instance. The graceful church spire is prominent for miles around. It compels a walk up the hill from the canal. 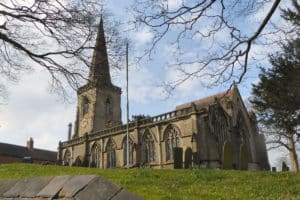 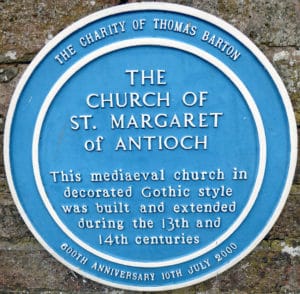 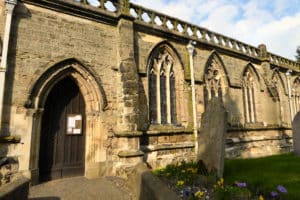 but was extended in the fourteenth century.  You’d think that church and spire have been here undisturbed for centuries, not quite so, apparently. See this about the spire:

During its long history the spire was dismantled on two occasions.

In 1580 a terrible earthquake shook the whole country and the spire crashed to the ground. During the Second World War an aerodrome was hastily constructed at Lindley which was in close proximity of the church. It was decided for safety reasons to dismantle the spire as night-flying operations had commenced.

It was carefully taken to pieces and each stone numbered. When war ended in 1945 the aerodrome was closed down and the spire was rebuilt to its former glory. ( Past Times )

There are stories that in 1485 local folk watched the nearby decisive battle of the Wars of the Roses from Stoke Golding’s church tower.   Soldiers had prepared for battle here, some even sharpening their swords on the stone window sills of the church. Hours later, at what became known as Crown Hill, the circlet from Richard lll’s helmet was placed on Henry Tudor’s head. 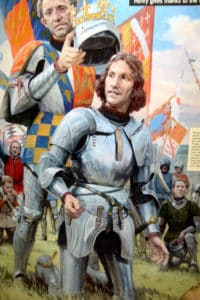 (Note to self: must try to find a Crown Hill sign to photograph when Cleddau returns past the village). 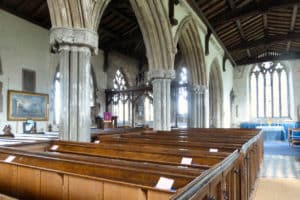 Inside the church a fine arcade separates the nave from the aisle where a huge parish chest bears the date  ‘Stooke 1636’,  although it is thought to be rather older than that. 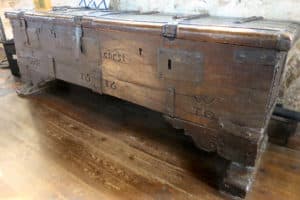 More recent history is found against the south wall. 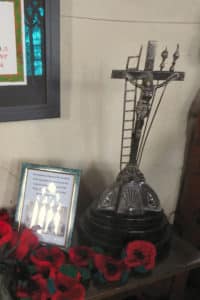 There’s a blue plaque on a house opposite the church. 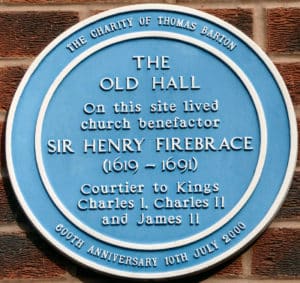 What it records is not a familiar name (unless you’re from these parts) but the name of someone who knew and worked for kings,for three kings in fact!

About four miles along the canal from Stoke Golding is Ambion Wood (remember that name from Bosworth battlefield accounts?) You can moor here, cross a disused railway line 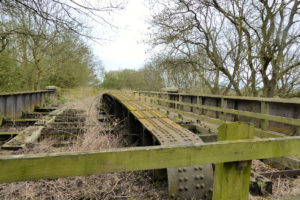 – and find yourself overlooking the battlefield. 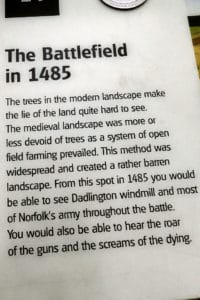 A new exhibition within the Battlefield Centre explains how the most likely site of the battle has been established by the identification of the medieval marsh and the discovery of a large scatter of cannon balls, as well as of  broken military equipment and metal artefacts. 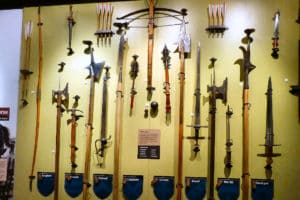 The Centre charts the background to the dispute for the Crown,presents an excellent multi-media interpretation of the battle itself and explains the aftermath of the battle. 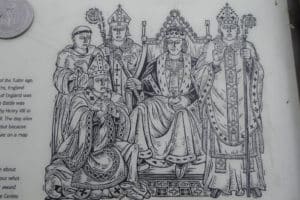 The establishment of the Tudor dynasty and its most famous and colourful outcomes are covered too. 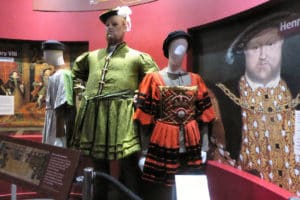 Most moving perhaps are the 2016 photographs of the burial procession of King Richard lll’s remains. as it was conveyed through the county to Leicester. 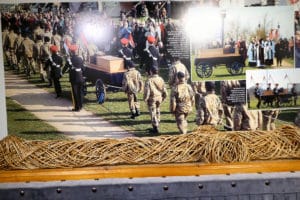 Of course the exit from a museum or exhibition is via a shop. Earlier on school pupils had been marshalled through it in small groups. Now there was just one other visitor.  Recently retired she had long yearned to visit Bosworth (and too the Richard lll resting place in Leicester Cathedral). Emphatically she declared her staunch Yorkist loyalties. A brave man, the Captain described the Tudor Rose which adorns Cleddau’s hull. Hackles were raised, heated but friendly argument ensued – and the shop manager called for a truce!

Up on Ambion hilltop is a sundial, 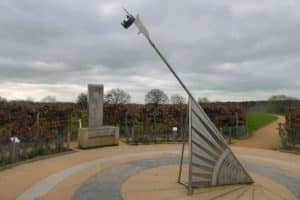 a war memorial to the opposing sides. Tall thrones represent King Richard and Henry Tudor, and a shorter one marks the significant presence on the battlefield of the Stanley forces. The battlefield trail is a leisurely walk which provides more information – and an impression of the weaponry used… 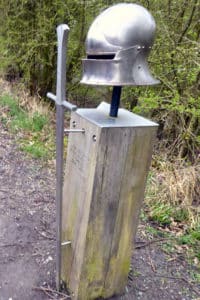 Along the trail is Shenton Railway Station, the southern terminus of the Battlefield Steam Railway, a most convenient a way to arrive at such a historic site…

If bloody battles for a crown or churches with ancient fixtures and fittings are not your preferred slice of history you can get a dose of nostalgia on The Battlefield Line.   Shackerstone station offers refreshments 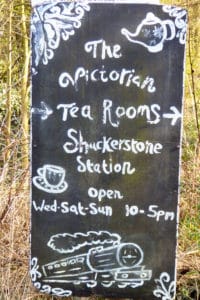 in the tearooms crammed with items from the Victorian period, 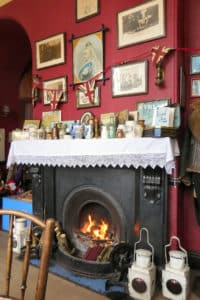 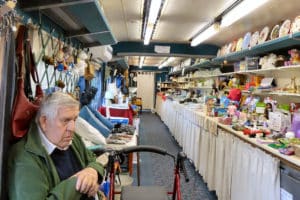 the museum is full of railway paraphernalia – and the trains are magnificent. 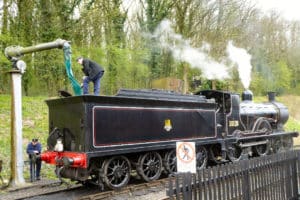 To ride in a first class compartment, 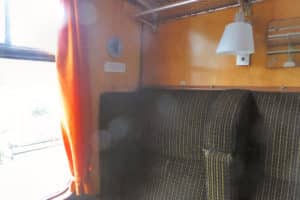 sliding door separating passengers from corridor, to hear the steam whistle and the chuff of the wheels, to see the stoked up fire,

– magical! You do not need to be a fully accredited railway anorak 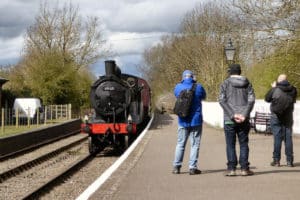 to thoroughly enjoy this steam railway experience! Granted, in use on the platform and the train were numerous fit- for-purpose cameras and tripods, but then it’s ideal photo material.

Last words: quiet and tranquil the Ashby landscape now is – but in its past there was noise, steam and drama aplenty…

Stats so far from Higher Poynton: 119¾ miles and 49 locks