What a difference between two Fridays!
Last Friday (25th October) good friend Les Biggs was still a patient at Watford General Hospital. There had been a very major operation, as regular readers of his and Jaq’s blog will know.  Last Friday he was attached to all sorts of medical paraphernalia – and I was witness to Matron’s deep discomfort.   A storm of protest had erupted overnight after Jaq had recounted to friends and family the terrible saga of Les’s post-operative “care”.  That day Jaq’s poise and passion was remarkable; as the interview with Matron and Ward Sister wore on Matron’s face darkened and her list of issues to investigate grew longer and longer…
Now, one week later (Friday 1st November), Les is safely back on board nb Valerie, able to reflect on how conditions had improved post the protest storm. He’s tired, of course, there’s a lot of missed sleep to catch up on and weakness to overcome. But Jaq – nutritionist, catering manager, nurse – will support and nourish him, physically, emotionally and mentally.

With all our hearts we wish them both well. Boaters galore have rallied to offer help and support in all kinds of ways, the boating community linked by the love of the waterways and the power of digital connections.
It was great to see you yesterday, Les, may your recovery be swift and steady.

…….
Then there’s the Cleddaus revisited too: last week (23rd October) there was a return to Stoke Boats. A tug tractor was manoeuvring a boat from the slipway. 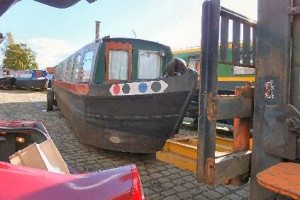 It came close, very close… we pressed ourselves back against the car, then gazed around. Cleddau? Where was Cleddau? Not at the slipway; not on the hard-standing.
Into the office.
“Yes?”
“We’ve come about our boat – Cleddau.  Err – where is she?”
In the middle shed, apparently.
There she was, out of the water, balanced on blocks. 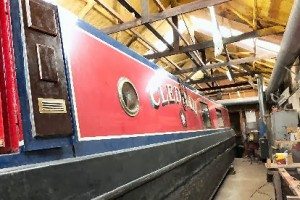 There was much talk of ballast and waterlines. Two of us, Boatwif and the Cheshire One, crept up the step ladder at the stern to peer inside. Gone was the bedroom, gone was the glory hole (utility area).  A plastic bowl was positioned to catch any watery droplets from the radiator in the one-time airing cupboard. Red cabin sides were evidence of rust-proofing treatment.

It’s spray foam insulation next. There’ll be another checking out on progress in a week or so’s time.
Time passes…
There was a Sunday dash out west, families to catch up with in west and mid-Wales. When you drive for five plus hours across country to a west –facing coast you want to check it out. On Sunday afternoon there was the Cleddau Bridge, a road bed high above the grey choppy waters. 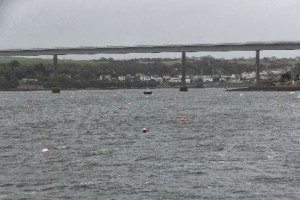 In the foreground was Hobbs Point, an angled access slope for marine craft. 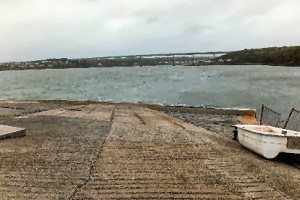 From here, in the fifties and sixties, Cleddau Queen 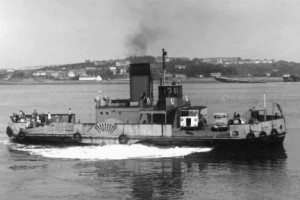 and Cleddau King used to transport cars and foot passengers across the Haven to Neyland. “Ferry was late, Sir,” was a not infrequent call from the three fellow pupils who travelled to school “from across the water”.
Pembrokeshire suffers in westerly gales: those alive in November ’53 have not forgotten the falling roof slates, the shattered glazing, the upturned trees, the paralysed roads.  After a storm locals are inclined to grab cameras and windproofs, and head out to the Atlantic-facing beach.  There still is the small hut, where local women would dry the seaweed before dispatching it to Swansea to become laver bread. 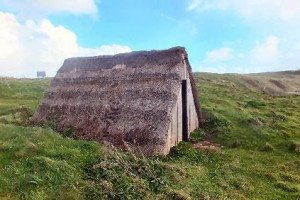 Debris left by the tide can be put to all manner of uses, 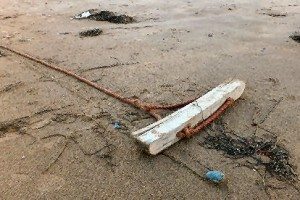 but this place is finest when wind-whipped spume dances and bounces along the shore, 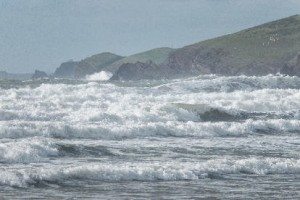 when a salt haze hovers over the waves, when spray crashes upward against the cliffs, 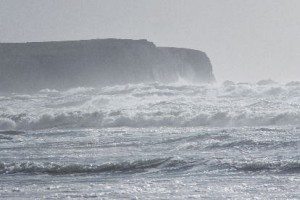 when the roar of the waves 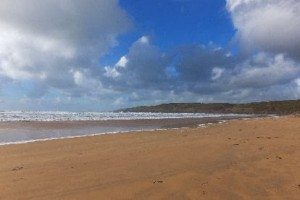 is an inescapable soundscape.
Back in land-locked Beds now…