From Autumn to Fall… 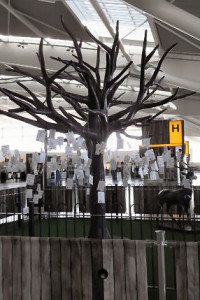 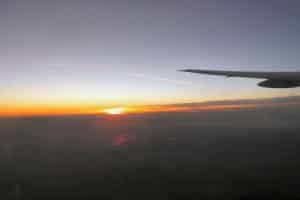 It was almost a shame to forsake British shores on Wednesday: the back garden maple tree is just edging from deep green leaf into a  shiny mahogany brown before the brilliant scarlet colour appears, trees around the M25 shone in bronze and copper colours and as the aircraft lifted off in an eastward direction russets and yellows in London’s suburbs  were clearly visible…

At midday Terminal 5 was calm, purposeful. The building is a delight, an enormous airy structure and while waiting for the designated time to drop off baggage Boatwif took a stroll. (Use legs while possible was the reasoning) There’s a sculpture gallery at Terminal 5, did you know that? And as a relic from the Olympic Games, there is a memory tree, messages from the departing athletes suspended from its purple branches.

An airport is a fine place for people watching. Heavy coats – must be going somewhere cold…T-shirts and light trousers – somewhere warmer… Was this a rock band on the move, electronic cables and dials being disgorged from their metal reinforced  instrument cases…? On one side sat a Canadian veteran, heading back to Montreal after spending four hours at the Cenotaph on Sunday. Onto a spare seat beside Boatwif stumbled another traveller, bound for Frankfurt. He talked a lot: six grandchildren, a pilot, aged 62, an Icelander.  He leaned too close, was slightly inebriated, kept talking. He and the Captain found a common topic, Nimrods.

“So you flew Nimrods?” (Affirmative). “You were a Nimrod captain?” (Affirmative). Then the killer question: “So did you fly in the Cod War?” The air chilled, was this to be a diplomatic incident…? Negative! That part of history had preceded the Captain’s Nimrod years.

Bags dropped off (neither exceeding the weight limit, phew) it was Security next. All was going well – until a Kindle had to be retrieved from a carry-on case. Then shoes had to be removed… Eventually after Security Airside was reached – a massive retail opportunity for those who have the will or the finance to buy luxury leather goods, perfumes or alcohol. Alternatively, you can while away the hours reading menu options at the many restaurants, or just sit by a window and watch the aeroplanes.

Though the destination was the far south of California the route went north – between Manchester and Leeds, over Grasmere, out over the west coast of Scotland, up over Iceland, on over Greenland, flogging for ages across Hudson Bay… The seatback moving map provides maps and names – Saskatchewan, Saskatoon – down into the US – Salt Lake City, Las Vegas… San Diego  appeared along with Mexicali and Tijuana; further out west was Honolulu. The aircraft descended,  skimming above the city’s skyscrapers, coming in low beside San Diego’s harbour. It had been a good ride and a smooth landing; some passengers started a thin round of applause for the front deck crew.

After 12 hours on an aircraft it was clearly time to get off! Just thirty minutes was spent in line for entry checks, all fingers and thumbs were screened and eyes were photographed.  A sniffer dog worked round bags and bodies; all luggage was passed through an x-ray machine – and then access to the USA had been gained!

The Captain has a new satnav for the car, cheaper he claims than updating the Western USA map. The way from the car hire base to Cal Son’s house is known but en route up the Interstate 5 and crossing inland to San Marcos the female electronic travel companion frequently chided “You are over the speed limit”. Vehicles of all kinds whizzed past, they too apparently “over the speed limit”. Will the Captain carry out his threat to disable the speed check function…?

Is it worthwhile? Of course: at 0630 PCT (1430 GMT) there were two bedroom visitors. Both larger, both as affectionate, words tumbling out to explain their plans: Cal Guy Snr was to be in school for 0750 with parents for a Parent /Teacher conference while Cal Gal was eager to invite grandparents to a Thanksgiving performance. Then appeared Cal Guy Jnr, all smiles and hugs and recognition: “Grampy! From Daddy’s computer!” A Skype child!

Here it is Fall. It is hardly even light jacket weather. Flowers still bloom in hedges and gardens. But outside some of the houses, apart from leftover Halloween pumpkins, there are displays of corn dollies and harvest fare. There were a few surfers in the waves at Carlsbad South State Beach early this afternoon – and something else, but more on that in the next episode…