From Collection to Collectible…

From Cleddau’s mooring near Wightwick Bridge (western outskirts of Wolverhampton) it was but a five-minute walk to the National Trust site of Wightwick Manor.

Two of the Cheshire Three had driven south to meet for a picnic lunch, a visit to the Manor and a stroll around the gardens.

The Manor is a very short walk from the car park.

Exactly when had this been built – and had it at some time been extended? Was it Proper Tudor (timbering, chimneys)

or Mock Tudor constructed at some later date?

Once inside (masked of course) answers were sought and provided, each room being stewarded by a guide.  The earlier part of the Manor was built in 1887 for Theodore Mander, a successful Wolverhampton-based industrialist whose business manufactured Mander varnishes, paints and later printing inks.

It is the 1887 part of the building that visitors see first. This was a residence built to modern standards (electricity, gas, under floor heating, etc) with rooms comfortably furnished in the modern Arts and Crafts style of the late 1880s. Original William Morris wallpapers adorn the walls

and decorative tiles, created by William de Morgan are displayed in various places.

Fireplace in the Drawing Room which was often used by the ladies:

One of many Pre-Raphaelite paintings in the house: 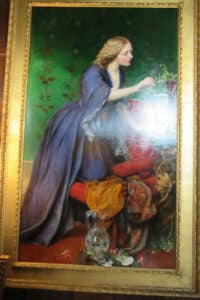 Within 5 years the house was extended to allow for entertaining

and a dark wood Gothic interior ceiling. The Dining Room has table settings for six although the dining table can seat eighteen diners. The Mander family was influential in the Wolverhampton area and a photograph in the Billiard Room shows a large group assembled at Wightwick for a meeting to discuss Chinese policy and trade.

There are kitchens (a wet kitchen and a dry kitchen)

to see as well as a scullery and laundry. But for art and ceramics devotees this is a building that deserves a second visit.  Apart from the many fine paintings and arrangements of decorated tiles inside the house there is a substantial De Morgan Collection of tiles, ceramics and paintings in the separate William and Evelyn De Morgan Malthouse Gallery.

the War Memorial recovered from the Mander Works 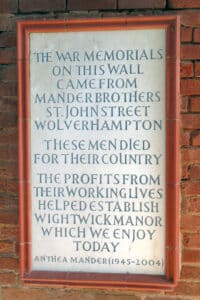 as well as plenty of colour and growth.

1st June – back to cruising.

There are three more locks to Compton and then the 10 mile long summit to Gailey.

There are two canal junctions to pass, the one heading south at Aldersley up the Wolverhampton 21 towards Birmingham

and a half mile further on Autherley Junction giving access north along the Shropshire Union Canal.

soon give way to some Narrows.

Patience (and deep intakes of breath!) are useful when two boats need to squeeze past each other at one of the passing places.

You can pass under many bridges but not many have such vibrant graffiti as this (M54).

a pair of mangles,

hedges ablaze with blossom, farmland, two marinas… On the canal winds until it reaches the Roundhouse at Gailey. 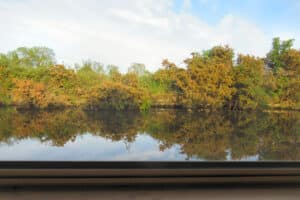 a Northwich large motor boat and a Northwich-built butty.

How would an engineless boat climb the lock?

The motor boat went into the chamber and rose,

the butty remaining below under the bridge in the throat of the lock. A long rope from the butty was tied around a bollard

and then used to bow haul the boat into the empty lock.

and off the two boats went.

The pair’s destination was Yarwoods Basin down on the Weaver, the journey having started at Newbold, near Rugby. Boaters may like to visualise the route, due to be completed within eight days…

Away from Gailey on June 2nd – away from the road noise of the A5 (Watling Street), but ever closer to the M6.

At Rodbaston Lock only the sound of water leaking down into the lock could drown out the motorway vehicle roar.

5 locks (and barely 3 miles) on from Gailey is Penkridge, a small South Staffordshire town.  Great care is being taken within the town’s shops to promote customer safety. Sanitisers are prominently available and customer numbers limited. 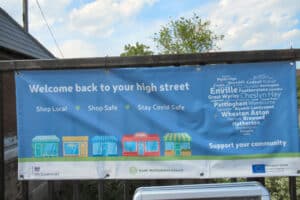 and a narrow street leading down towards the church (Grade 1 medieval listed),

the railway station – and a huge Penkridge Markets area.

It was neither Wednesday nor Saturday, the regular market days, but a Thursday – and a bit of activity caught the eye… Was this a Flea Market or a Collectors’ Market?

It was certainly the place to come for knitting needles, 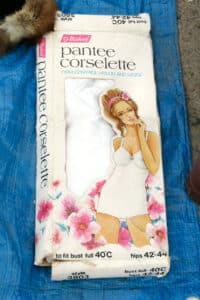 (No purchases were made…)

On the walk back to the boat Boatwif could not help but muse: why was it that in a Californian tourist town there were signs at certain memorabilia shops for “Collectibles” and at others for “Collectables”. Is there a difference? Is there a preferred spelling? Found online (in blue) :

Onward tomorrow, still downhill (“collecting” 5 more locks) to Stafford and from there to Tixall Wide.