From east to west…

After the trip along the Relief Channel it was back to Denver.

Here the boats and boaters would need to wait for suitable water depth to transit from the non-tidal Ouse down a tidal river stretch and lock up onto the Middle Levels.

Denver is a superb place to play a waiting game. There is wide water with plenty of mooring space on both sides.

You feel you can breathe deeply here as there is so much open water and a range of walks to do along the various flood banks. For the curious or the technically minded or the historian there is more. Various boards near the sluices and gates provide fascinating information.

There is a summary of works here, the first sluice being put in place at Denver in 1651.

There are maps of the fenland waterways 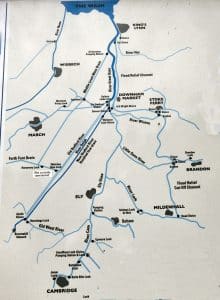 and diagrams of the sluices, gates and water channels. 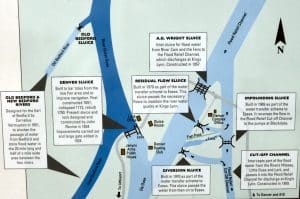 There are explanations of how, nowadays, excess water from Bedford and the downstream Ouse can be fed into the water supply of Essex via a 20 kilometres long tunnel… 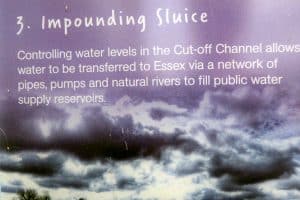 But while prowling around the site when waiting for the tide to come in (more on that in a moment) it was this that brought a smile: 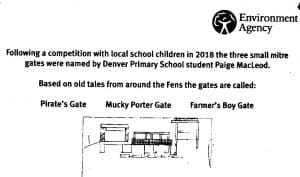 For pupils at Denver Primary School the Denver Sluice is a familiar sight: now each of the gates has a distinctive name… But what were the tales that inspired the names…?

“Locking down time on Monday to Salter’s Lode?” the lock keeper had responded on the phone.  “Well, some time after 1330…”

Thus by midday Cleddau and Tentatrice, with water tanks replenished, were moored on the upstream lock landing.

The downstream view from the bridge that crosses the sluice though was bleak: green weed, mudbanks and downstream pontoons at a very wonky angle. 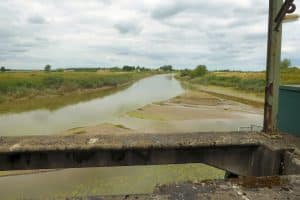 The duty lock keeper didn’t seem too concerned. “Neap tide,” he said. “Can be a bit slow…”

River inspection – not much progress. 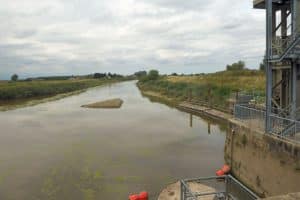 Then the lock keeper offered an update: “There are 8 boats coming up from Salter’s Lode. We’ll get them through in two lockings and then we’ll let you out.”

It was well after 3pm before the first boat appeared; 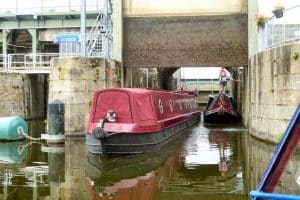 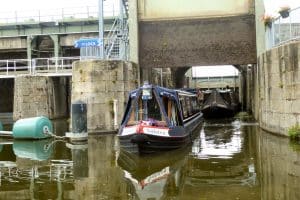 Time ticked on. The crews sat, ready and waiting… Would the tide turn and take all the water away…?!

Eventually Tentatrice and Cleddau were called forward into the lock. “Have you decided what you are going to do?” asked the lock keeper. There was an option, the second boat could “wait on his wall” (at Salter’s Lode) or wait on the pontoon outside Denver until the final upcoming boats had arrived. 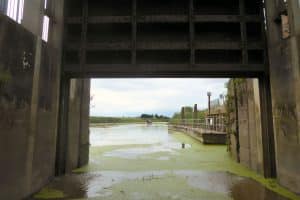 Cleddau sat outside the sluice. 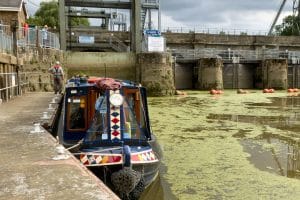 Birds squabbled about dominance of the mud island, 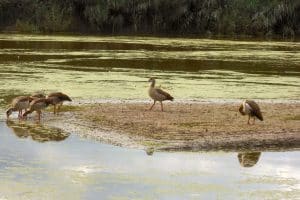 the water was still – and the Denver lock keeper, via telephone communication with his colleague, talked of another two boats to come up, the number then amended to three, then back to two…

Gently the tide was turning, the water beginning to seep away.

“Go now,” said the Denver lock keeper. “You’ll cross with another one coming up…”

It’s less than half a mile but the entrance to the Salter’s Lode Lock is not very obvious. A blue boat emerged at right angles to the river and turned upstream.

Cleddau approached the entrance, turning left into the lock cut. On the bank the Salter’s Lode lock keeper stood: “Go with the tide,” he bellowed. “There’s a mud bank there…”

As planned the Captain let the ebbing tide push the boat towards the lock cut and then with the engine he posted the boat into the lock.

One last boat (the twelfth) was still due to go up to Denver. There was a swift change of places with the waiting boat on the lock landing and it disappeared into the lock.

An hour later the tidal river level was ebbing fast. 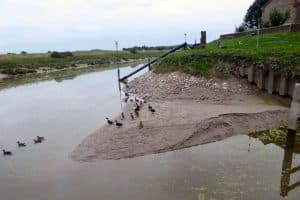 Safely moored on the Middle Levels there are different concerns… Shallow and silted up waterways, for example.

Early Tuesday morning a boat bound for the St Neots IWA Festival had come alongside. The previous day the boaters had participated in a great challenge, to navigate as many craft as possible along the Old Bedford River. It was a large team effort, a narrowboat (nb Lily May), a dinghy, a canoe and a sailing boat eventually succeeding along silted up waters. Fen waterways fans, look out in the press for coverage of this campaign.

From Salter’s Lode the route across the fens is initially via Well Creek. It’s slow-going, pushing a boat, it feels, through liquid mud. (“Like a car going uphill in first gear,” the Captain summarised).

The land either side is flat and after the wide waterways of recent days road traffic seems alarmingly close.   Headroom is a concern: many bridges are low 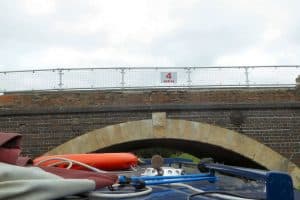 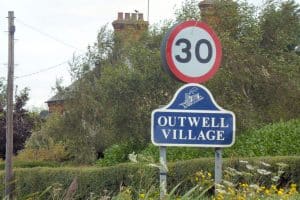 and Upwell are twin strip villages where road and Creek run parallel. On a sunny morning there was plenty of waving to do at young children and their supervising grandparents. It’s not uncommon to notice buildings extended in non-matching brick… 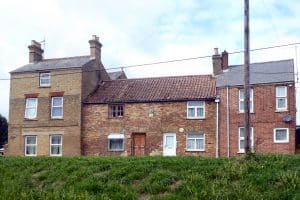 Marmont Priory Lock is reached after Upwell. On previous passages the resident lock keeper has been on site. Not so on Tuesday. The upper lock landing has only one bollard so the bow rope was secured round a tree. A boat had just left the lower end of the lock. The hydraulically assisted paddle gear required a hefty workout: 93 turns up, 93 turns down on upper and lower gates… and the process repeated for the second boat.

The character of the waterway changes shortly after the lock: it becomes wider, deeper with open views of wind turbines, 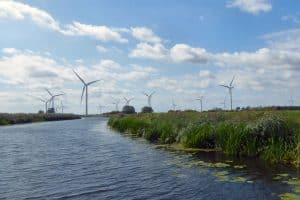 There seemed to be other Russian military equipment too. (Captain’s note: 2 T-62 main battle tanks, one Russian BMP-1 armoured personnel carrier and a Russian Military Caravan. A collection, presumably…)

Another memory swam back: the waterside property owners seem to have a liking for twee ornaments. 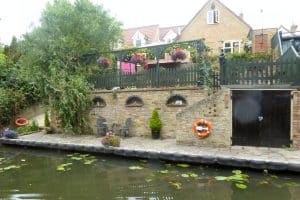 There was a good mooring alongside Nene Parade right opposite the Town Hall, 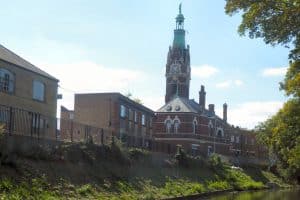 whose chiming clock, aided and abetted by the resident dozen white geese, provided regular background sound throughout the afternoon and evening.

Have the Middle Level Commissioners (the authority which oversees the water levels and fens’ drainage) renewed their signage recently? These seem more visible than on previous passage this way.

Somewhere north of March is a small but significant sign: 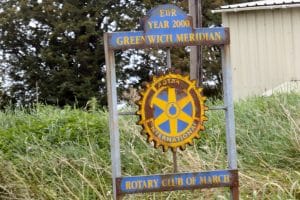 After weeks spent east of the Meridian Cleddau now would be to the west!

To cruise quietly past rustling reeds, towering turbines and under vast skies makes it easy to see this region as a tranquil agricultural haven.  But the number of strategically positioned World War 2 pillboxes

are a reminder of a different period when foreign invasion was a possibility.

Boating across the fens requires some planning. Entry at Salter’s Lode (near Downham Market) from the Great Ouse is dependent on the tide while entry from the River Nene is via Stanground Lock (near Peterborough) and can only be done via a booking with the lock keeper. This latter lock is crucial in maintaining fen waterways levels. Planning a lock passage also means planning an overnight mooring. March to Whittlesey Park (above Ashline Lock,

) was planned for Wednesday, to give access to Stanground Lock on Thursday.

Somehow, with a fair amount of jigging around, 5 narrowboats of 58 feet or longer managed to tie up on a two boat mooring, all bound for a Thursday Stanground booking.  In the distance a sixth boat perched on the lock landing.

Whittlesey has a very tall church spire and a lot of brick-making chimneys. (More on those next time). But, without a walk into this little town (once Whittle-on-Sea) who would have known about the Straw Bear… 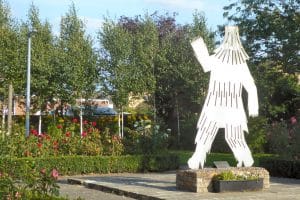 Its origins go back to Plough Monday antics and has been revived in recent decades. This sculpture is in the Garden of Remembrance.  (See Whittlesea Straw Bear section here ).

Cleddau and Tentatrice are through Stanground Lock now and onto the River Nene. The flat lands will soon be left behind and ahead lies the 62 miles and 37 locks of The River Nene.