Boatwif caught the Captain looking back at the last blog entry a couple of days ago. It had been posted on January 18th, following a few special days in Pembrokeshire and a couple of nights (and two theatre productions) in Stratford-upon-Avon. That post finished with:

‘Now a germ of an idea has begun to form: wouldn’t a cruise down to Stratford and along the Avon be just the thing to look forward to later in the year…?’

Back at home base the Captain busied himself, initially with the new season’s boating plans (Cheshire – Stratford – Birmingham – Nottingham – Lincoln -York…) and then with improving his rope knotting skills.

There were works going on at home

and only a detached awareness of what was occurring in China.

and hours whiled away with jigsaw puzzles…

The re-lining of the Macclesfield Canal at Bollington to repair the long-term leak would soon be completed and the canal due to be reopened by the middle of the month. On March 1st there was an overnight trip up to Cheshire, to catch up with the Cheshire Three, of course, and to inspect the boat.

A dive into Macclesfield’s Tesco was an opportunity before departure on the 2020 cruise to stock the boat cupboards with dried foods, paper goods and tins.

It was southbound then to Worcestershire for time with the Tentatrice crew, a wander around Hanbury Hall, 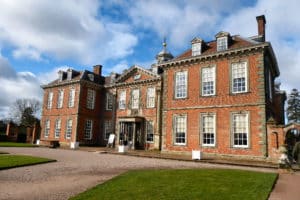 followed by the Tentatrice First Mate’s talk at a canal society meeting and a 9 lock boat trip between Stoke Prior down to Droitwich Spa Marina.

March crept on, days punctuated by marking scripts for the 500 Words Radio 2 Short Story competition against a background of news of COVID -19 moving west across the globe…

Remember that glorious summer of 2018? Cal Guys Snr and Jnr helped out on the Great Ouse and on the Cam.

Remember back a couple more years, when Cleddau sailed under the Severn Bridges and the Clifton Suspension Bridge and tied up in Bristol Docks…

Thank goodness for the memories…

In early Spring the daily world has shrunk to splashes of post-winter colour in the garden and various views round and about a Bedfordshire village.

Sightings of the church spire are frequent: from close by,

from across the fields,

from the ridgeline to the west of the village.

This church has stood here since the 1300s, the top of the tower since the 1400s. To think the main body of the church was already built in 1347, when the Black Death began to ravage the country. What a symbol of continuity it provides, what celebrations and national events this building has marked.

A huge open green space behind the village is criss-crossed by a variety of paths.  Walking over it always creates the same visual image of long-skirted milkmaids trudging across these fields to Sunday church. 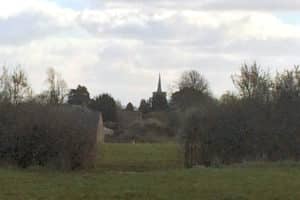 (Thank you, Thomas Hardy, for that persistent mental picture).

There’s a corrugated effect still on many of the village fields,

the result of many years of ridge and furrow tilling. Oxen used on British land for two thousand years or more

have long been replaced, initially by steam powered machines and then by tractors.

Time and inventions have constantly moved on, so too does the cycle of the year.

Spotted during a walk alongside the woodlands that verge the village to the west were tiny red splashes (scarlet pimpernel flowers?).

Shy violets have begun to peep out from behind grassy blades

and, look closely, there in the woods

are hints of the first few bluebells.

In a near silent world birdsong and the hum of a tractor engine are the only sounds.

There is pleasure to be had from gazing at the nearby, the close at hand (here, plum tree blossom). 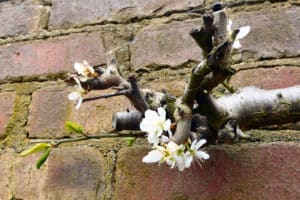 Observation of Spring’s arrival, imagination, adherence to the rules and precious memories are sturdy props just now, even if the seasonal return to a floating life is having to wait a while…

Wishing that you all stay safe and well.