Fradley is always busy with boats and walkers, holidaymakers and gongoozlers.

Conversation with other boaters at the Fradley locks is usually easy: which way are you going, further along the Trent and Mersey or along the Coventry Canal? Adventures get regaled, information swapped.  “Been on the Staffs and Worcs,” confided one boater, “Never heard of it before, it’s … it’s exquisite.”

The appearance of several working boats

Along the familiar route it’s the new or the different that catches the eye: a defiant  scarecrow in an allotment near Armitage,

its creator posing in similar stance beside it. Not much further along there was a far better view than expected of this figure (Spirit of Christmas Past??)

which is usually mostly hidden by a moored boat. There was a mini-greenhouse on top of a boat

and a line of figurines on a wall in a Rugeley garden.

Once past Rugeley and over the River Trent the canal develops a magical quality, the gentle hills of Cannock Chase rising to the west,

the young Trent river babbling innocently beside the canal.

Where there are properties overlooking the Trent Valley in these parts they are attractive and many have delightful gardens. Here one such garden has reserved a patch for the local swans.

Colwich Lock a mile or so further on is often a bottleneck for boats. Clouds of blue smoke gushed from the boat ahead,

not that its owner showed any concern. But then, coincidentally, in the lock side cottage garden were teasel heads of an almost identical colour…

There are glimpses soon of Shugborough Park – and a pretty bridge crossing the estate.

Up through Haywood Lock, a left turn (in rain) 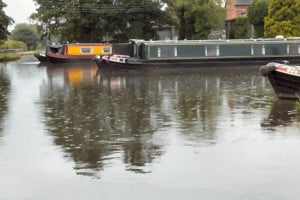 at Haywood Junction, leaving the Trent and Mersey Canal for the Staffs and Worcs Canal. 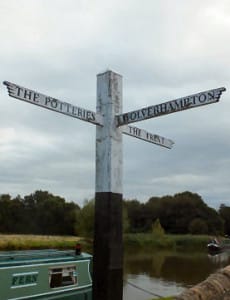 Pass some private moorings, where relaxation obviously is a priority, 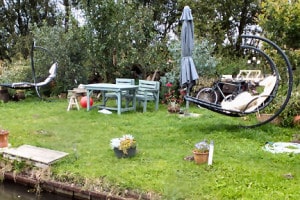 and it’s less than half a mile to Tixall Wide. Oh joy, oh bliss, there was a perfect mooring space.

It’s not often Boatwif invites the Captain out to lunch but Wednesday was one of those days. Of course there was an ulterior motive. In May, southbound down the Trent and Mersey, there was a sighting of a new building, still then unfinished, at the Great Haywood Farm Shop. Now, rumour has it, there is a new canal side cafe there. And so there is!

The Captain discovered Staffordshire oatcakes (a sort of savoury filled pancake) a few years ago and his heart leaps if he finds them on a menu. An oatcake the happier it was back to the boat for some afternoon paint touch up jobs.

A walk to the next lock that evening provided some gentle exercise. To see that the distance back to Haywood was 1M 3F (1 mile, 3 furlongs) provoked discussion as to the history and length of a furlong… 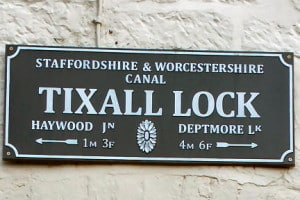 Tixall Wide is serene and  tranquil, especially in the evening.

Should you want to stay in the Elizabethan gatehouse overlooking the Wide it’s a Landmark Trust property available for hire. 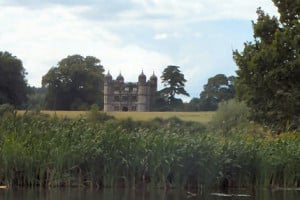 Passing through Tixall Lock was nb Shadow, once the subject of a boater’s blog.

The next day there was another boat famous in some circles, Granny Buttons 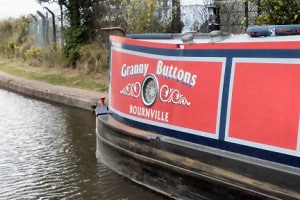 and then a conversation at a lock today with Ian of Free Spirit.

The journey from Tixall Wide to Penkridge (Thursday) brought back memories of this same route four years ago when an inflatable canoe, a wedding photo album and apples caught in a fishing net enlivened the cruise.

Each lock raises the level of the canal. It’s intensely rural (the reed growth in some parts a reminder of the Indian Queen country encountered on the Aylesbury Arm).

Where there are houses backing onto the canal the gardens are a riot of colour and texture.

As the canal climbs modern transport makes itself known, railway lines and the M6.

There was a first ever walk down into Penkridge, a pretty little town, again well adorned with floral displays. The Gaol is now a heritage centre.

Above Penkridge today there were sightings of two very different boats at Otherton Lock: one apparently abandoned on the lock landing

and the other a squared-off looking boat pushing a butty at the bow and having a ramp for disabled access at the stern.

A couple of locks further on there was a retail opportunity (beans and potatoes bought!) 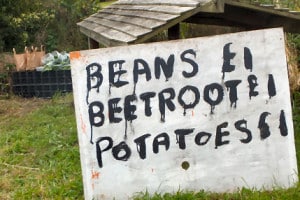 Then came a boat name not seen before…

Moored now in rural isolation the Captain went excavating this afternoon. Under the front deck he claims to have found the chimney sweeping brushes. “After all, it’s nearly September,” he has warned…

Tomorrow: another day, another canal: Cleddau and crew should be heading north on the Shropshire Union, towards Brewood.