On leaving Lymm it was a Sunday, a day when walker, jogger and trip boat numbers are usually high, especially in fine weather.  There were still another 16 or so miles along the Bridgewater Canal to cruise.

It was a day of colour – when canal side verges and gardens were at their blousey best. 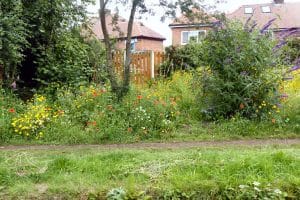 The Hill Top Road bus stop loomed, on the eastern edge of Warrington – would there be passengers waiting for a bus-boat…?

No, but a pile of angling equipment seemed to indicate humans nearby waiting for something…

Further on though, at Walton Hall, there was a ferry boat service,

this for boat trips on the Wizard, connected to a family day at Walton Hall Gardens.

On, past pretty Moore

round some twisty bends, 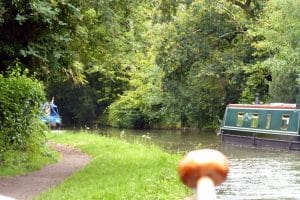 To the north, though not visible, is the Manchester Ship Canal and beyond that the River Mersey.

Between Warrington and Runcorn the Daresbury Research Laboratory overlooks the canal.

The grounds are immaculately kept 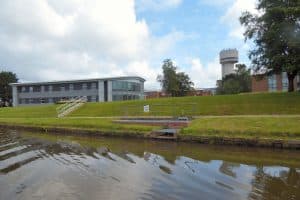 and the tower (water tower? used for research purposes?) dominates the canal scenery for quite some distance. (See additional information in comment below).

Not far past Daresbury Cleddau and Tentatrice pulled in for a perfect overnight mooring:

here there was plenty of light, a wide stretch of grass separating boats from towpath, mildly curious cows grazing on a slope opposite. It was visually very pleasing – and a fair distance from intrusive road or rail sound. (Oh look! This mooring spot matches exactly a view in the 2005 Pearson’s Cheshire Ring Guide, page 41…)

Late afternoon Boatwif, the Tentatrice First Mate and the Boat Dog strolled a mile or so further on, to cross

over and then to walk along the first few yards of the Runcorn Arm. 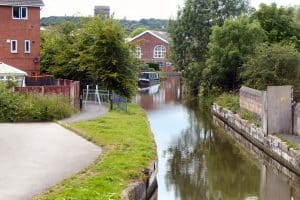 The three navigable miles to the Runcorn terminus are not a target destination: the 10 double locks down onto the Manchester Ship Canal were abandoned and filled in over fifty years ago and there have been no glowing recommendations to visit the town.

The Captain has a tale about his worst ever night time drive a dozen years ago to collect Scottish Sis from the John Lennon airport. “Runcorn? Bandit land,” he says. “Burning tyres on bridges, they were…”  Perhaps that spirit of being beyond the law remains: en route back to the boats along the towpath motorbikes were encountered. (Three of them). When a point of view was put that a towpath was for walkers, boaters, horses and cyclists the response “But we always do it…” was accompanied by colourful language and snarling faces… (For photos see the Tentatrice blog here.)

Watched by young calves the boats moved onwards on Monday,

passing the 18 participants in the Pensioners Angling Competition.

The Runcorn Arm to the right,

under the M56, a pause at Midland Chandlers  on the left  – and then on,

to wait until half past the hour at Preston Brook Tunnel. 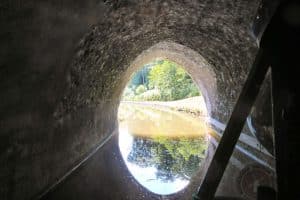 there was a stop lock and about four miles before the next. This was the Trent and Mersey Canal now, back looking out for the distinctive black and white mileposts which measure miles between Shardlow (East Midlands) and Preston Brook in the north west. 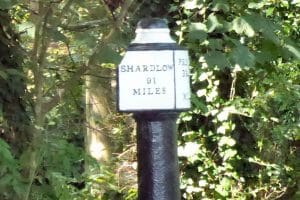 It’s a narrow canal, where summer growth decreases the width…

Just one boat was moored at the site of the 2012 Dutton Breach, just as Cleddau had been way back in April (26th).

– and then Tunnel 2, and another clock-watching wait… 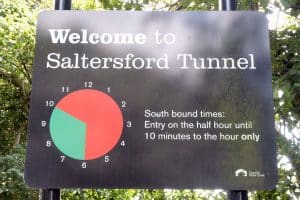 The first of three boats, Cleddau led the way through the twisty passageway 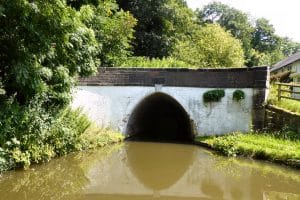 and on, out the other side, 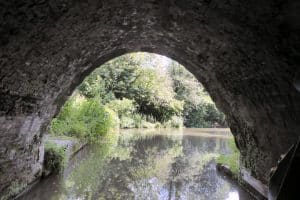 a few hundred metres only

separating Saltersford from Tunnel 3, Barnton. No clock inspection signs here, boaters, just look through to check for no oncoming vessels….

On through the tunnel – two boats outside ready to head north. “There are two more boats to come through,” Boatwif advised, and a jumble of southbound and northbound craft avoided collisions – just!

Concentrate: the Barnton road bridge is at an awkward angle…

Cleddau crawled on, the hunt for an overnight mooring on now. It’s narrow, tree-lined, and then there’s Anderton Lift,

a line of moored boats beyond. This is another mooring hotspot – but a quiet mooring was found.

A walk back to the ops centre at the Lift was worthwhile: the repairs to Saltersford Lock on the Weaver are expected to be complete by August 9th.  In case there is a September jaunt It was worth asking the question… and the new mural is pretty impressive.

In rain on Monday morning, once past the country parks, the April bluebells all gone now,   it’s obvious that this is Cheshire salt country.

The Broken Cross pub has been passed many times but this time there was a clear view of its sign. 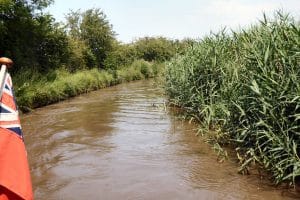 through another flash and over the River Dane at Croxton Aqueduct to Middlewich. . 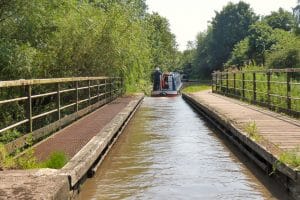 Middlewich: Big Lock is the gateway to the town.

Here a broadbeam lock, is sandwiched between the 1930s replaced narrow Croxton Aqueduct and the narrow lock system. Big Lock, overlooked by Big Lock pub, attracts gongoozlers. Amongst them were a family from Dallas, Texas, with 7th Grade twins Hannah and Oliver keen to work the lock. There was a lot to learn – and it was great to have their help.

So by Tuesday evening Cleddau was moored in Middlewich, the town of three rivers (the Dane, the Wheelock and the Croco). When cruising is resumed it’ll be up through these three locks

before a right-hand turn onto Wardle Canal, at 154 feet long, the shortest canal of them all…