and assessing the on-board electrical and plumbing systems.
After six months away from the Macclesfield Canal there is a satisfaction at spotting the familiar (the lovely Ramsdell Hall Railings), 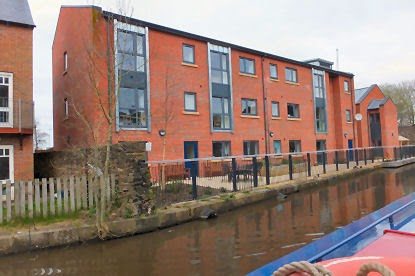 not far at all from the old, the iconic Hovis Mill in Macclesfield (itself undergoing some sort of a makeover).

There are surprises too, such as dear nb Quackers,

pontoon partner of Cleddau at Poynton, moored now in Macclesfield. Is she under new ownership yet? Surprise too at Kerridge, where the  mooring site carefully constructed over the last couple of years is now named Jasper’s Quay, and tied up beside it is a very new and shiny-looking nb Jasper.

while just beyond, on the right by the old Canalside Community  Radio station the motley collection of five or six moored boats has, it would seem, been cleared away. There was a surprise too before Adlington, where a pair of highland cattle (?)

dozed in a canal-side enclosure.
On Thursday a pause was called at Bollington Wharf. After 25 hours of engine running a change of gearbox oil was required.

So, while moored right opposite Adelphi Mill, (“adelphi”, Greek for brothers, the mill being built in 1856 for cotton production by the Swindell brothers) there was time to walk down into Bollington – and  discover Bollington’s very own labyrinth,

created as a lottery project on the Middlewood Way.
Bollington is a friendly place and in Heathcote the Butchers they’ll talk all day. “Are you just visiting here then?”
Soon the truth was out: “You probably know my son-in-law…”
“Oh, Martin, we like Martin. Don’t see him as much these days now he’s up in the hills. And we’ve seen your granddaughter.”
Those familiar with the geography of Bollington, Macclesfield and Tegg’s Nose will understand this conversation.
A northbound cruise up the Macc is a cruise into Cheshire hill country. Further south Mow Cop and its folly soars above Scholar Green (walked up there once); then as the canal approaches Congleton

Then comes the hill with the microwave tower and soon after Danes Moss the hills leach towards the Peak District of Derbyshire.

Past Bollington, as the canal creeps further north all road and traffic noise recedes. The canal glides past thirsty-rooted trees while

the hill ridges of Kerridge and White Nancy and eventually Lyme Park stretch like a long limb to the east.
Just the last few miles on Friday – and, out of habit once at Higher Poynton, there was a pause at Bailey’s Trading Post for water, coal and gas.

It’s a sociable spot – walkers, cyclists, boaters and dog owners all pause to chat and comment – and holidaying school children this morning gazed with interest as a boat ahead “had its poo tank pumped out”.

It was about midday when Cleddau was tied back on to a Victoria Pit pontoon – and within a few hours the Cheshire Three were on board, inspecting the works. The Cheshire One had a session “fishing” with the pink fishing net (a good catch apparently: herring, a salmon, twenty crabs and two lobsters!), Cheshire Mum tried out the dual control throttle for a left-hander and Techno Son-in-Law photographed the engine…
So for about a week, Cleddau can rest, “nice and cwtch” back on her home mooring.

Then it’s back to Stoke for some snag-sorting* and a 50 hour engine service…
*The snags – mystery water leak at the stern; bed height needing to be lowered; airlock release valve for the Webasto…