When there are three children of three different ages to entertain an element of juggling inevitably creeps in.

Out in Southern California with the Cal Clan during the Thanksgiving Break  there have been activities to involve all, activities applicable to all but appealing specifically to one or two family members – and activities that have just one fan…

Cal Gal adores it, her brothers don’t. So while the Captain and Cal Guys Snr and Jnr remained in Vista at an outdoor museum (more later) Cal Son, Boatwif and Cal Gal sped to Carlsbad for an ice skating session,

the group reconvening later for bowling in San Marcos.

Thanksgiving Week is a good time to visit museums (see the Maritime Museum of San Diego  visited earlier in the week), the Museum of Making Music at Carlsbad (Sunday)

and the Antique Gas and Steam Engine Museum at Vista (Saturday). Included in this last museum is a model railroad exhibition,

a multitude of tractors,

and agricultural machinery and a working blacksmith’s forge.

“I’m a biologist,” said one of the trainee blacksmiths, “and I just love looking at things closely and working with my hands.”

Sunday (last day of the week off school) saw a road trip north east into Riverside County, first to the March Field Museum

where a vast array of military aircraft

and associated artefacts seriously impressed the Captain.  “Will there be buttons to press?” Cal Gal had asked, fearing a boredom factor. But a trolley tour around the outdoor exhibits and some simulator time inside the Museum kept everyone engaged.

Onwards then back south, to Perris, to the Orange Empire Railway Museum.

This was a museum started about fifty years ago by 14 teenagers who adored the Los Angeles streetcars and pooled resources to preserve them. There is a vast amount to see and do here, from an electrically operated train originally from San Francisco

to trams and streetcars (and possibly the last remaining funeral tram). 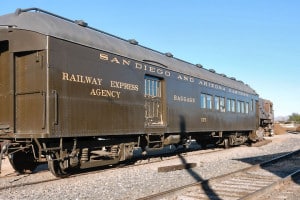 To see the streetcar operator press the floor bell stud (five times for a pedestrian crossing, twice to indicate moving forward) and to hear the beautiful clang! clang! of the bells gives every rider a thrill.

Appealing to all three Cal children were the two trips to Skyzone,

an indoor trampoline park. Here they bounced and jumped, jumped and bounced.

(endlessly) – and were never still enough for an in focus photograph!

These days play parks have one passionate fan (Cal Guy Jnr) though Cal Gal will always join in. Cal Guy Snr is good for supervising the fun – or for pushing a swing or a roundabout.

There are indoor times of course.

A set of domino tiles from a Christmas cracker provided some entertainment but who would have thought that a pack of playing cards and a decades old childhood game could provide so much laughter (Strip Jack Naked – anybody else know it? Despite its name it is not rude!) Giggling one day while examining the very small quantity of cards left in her hand, Cal Gal enquired: “Is it better to be silly or grumpy?”  (That was a hard choice for adults but they reluctantly opted for ‘silliness’). Cal Gal has a very competitive spirit and has triumphed several times with a recently acquired game Sleeping Queens, the rules of which her younger brother has quickly grasped.

The Magic Garden was a lightweight item transported from the UK.

By addition of particular chemicals it changes from this

In such a busy week was there time to fit in anything else? Well, a bookstore visit is traditional of course, but there were two swimming sessions too…

Now, on Sunday evening, adults and children are clearly in need of respite.  School again tomorrow!