Tuesday – Wootton Wawen to Lowsonford:  4.5 miles, 9 locks, 1 aqueduct
Cleddau continues her slow creep up the Stratford Canal. The sun’s hot rays define actions and activity: after a glorious, restful day on Monday under the shade of a wide-spreading tree it was time to move on. The Captain executed a fine reverse back to the Anglo-Welsh base behind to buy a replacement propane bottle. 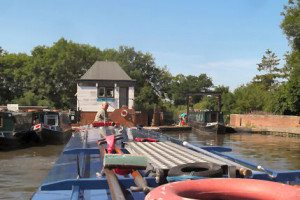 In slow time one of the longest boats in the hire fleet was being re-watered. It was positioned on the aqueduct and the staff member responsible for it showed no urgency in allowing a boat approaching from the south to come through the narrow trough.

Cleddau set off. A boat followed behind – was this to be a day of queues and lines?
Barely mid-morning – and already a cow was in the water cooling off…

Moments later that old student jape was recalled, you know the one – how many students can you squash into a mini? Under a tree numerous cows jostled for shade!

Tree reflections shimmered in the still water – and all was peaceful.

A mile or so on came the three Preston Bagot locks – and here was a queue, just a little queue. Up rose the boats in turn. Yet again there is astonishment at the lock house which originated as a barrel roofed structure – and grew!

The Captain identifies them as supports for lock gate hinges.
The heat increased, a mooring in shade beckoned. Curtains and blinds were adjusted in defence from the sun. Lunch; a task or two; no internet signal; a siesta… Revived, the crew puttered on. Lowsonford – a mooring near the Fleur de Lys pub? All moorings taken, boaters in shade were gleeful at their luck. Nb ON SCHEDULE – on schedule for what?

Here was nb Mad Hatter again, and look, an owner drawn image on the side.

an Andy Russell painted boat, both owners thrilled at his work.

One more lock and a mooring above. It’s cooler, there’s time to stroll. Block out the distant  motorway noise and look the contrast of growth against brickwork;

were crimping scissors used to trim these nettle leaves?

The feel-me look of a tree trunk in the sun;

water spilling down an overflow into the canal;

the grid guards at the upper end of a spillway;

a goose slumbering in the shade.

A slow day ends, the grass barely sways, the light begins to dim – but the goose is awake and alert now!

Tomorrow to Kingswood Junction and onto the Grand Union Canal.