Cleddau had cruised across the Middlewich Arm with a definite sense of mission. There were moorings to secure and people to meet.

So what was the liaison indicated at the end of the last post? And what was that about the chippie…?

It was in 2014 that a little flotilla crossed the Wash together, under the guidance of Wash pilot Daryl Hill. The 3 boat flotilla had first convened at Ely. There was Cleddau, Tentatrice – and Chouette. On Chouette were Angela and Patrick, stalwarts, it transpired, of the Macclesfield Canal Society. Patrick’s river and tidal experience were much appreciated in the slightly hairy trip down the tidal Great Ouse – and a friendship began.

There have been other Wash Crosser reunions (as at the Bedford River Festival last year) but in 2019 Chouette too has had a summer of changed cruise plans. While doing the Cheshire Ring (a circular route cruising through Macclesfield and Manchester and round to Middlewich) the Chouette crew calculated that boats and crews could coincide at Middlewich on Friday – and have a fish ‘n’ chip party. And so it was that several hours’ worth of catch-up boaty chat occurred on Friday afternoon /evening on Cleddau, where there was (squashed) room for six (and a dog) – and an electric fan to ease the impact of the dying heatwave. (Note: Too busy talking to take photos…)

Liaisons is a plural word. Resupplying the food stocks at Middlewich was necessary, but since the mooring position above Wardle Lock was to be a fair distance from the supermarkets the Tentatrice First Mate organised a Tesco delivery. Just after 10am on Saturday morning there was an advisory tap on the cabin: “He’s here,” and the Cleddau crew scuttled along to the nearby bridge and up onto road level to help unload and transport the purchases back to the boat, thus making a second very successful Middlewich liaison.

The rest of that day passed, uneventfully, with just a foot shuffle around Middlewich – in the rain. Saturday (Soggy Saturday) became another one of those 2W4C (too wet for camera) days.

There was to have been a third liaison – the delivery of additional crew to Cleddau at about 10am on Sunday. Early that morning Cheshire Mum was on the case, she was, that is, onto the Met maps.  With talk of slow-moving troughs and constant rain (a very accurate forecast!) another plan had to be made – and to be fair, to have inflicted the three hours (4½ miles, 6 locks) of intense, thoroughly drenching rain on anyone would have been less than kind! It was the most desperate of 2W4C days…

Plans are merely a figment of the imagination – or so the Captain often says. Using knowledge of the route ahead and an estimate of road distance from Macclesfield, another liaison was plotted: 10am at Wheelock Wharf on Monday.

After Sunday’s Deluge Day boats were on the move early on Monday. “Eighth boat… ninth boat,” the Captain sighed, visualising the congestion ahead at the Wheelock service point. “Do you know there are now twelve boats that have passed us this morning, all heading for Wheelock and the locks up the hill?!”

Cleddau was about 30 minutes north of Wheelock; Techno Son-in-Law was about a similar time east of Wheelock, he, plus the Cheshire One, in a car.

Cleddau approached Wheelock to join the back of a boat queue.

The liaison timing was right but nothing on the water was moving. The Captain pulled over to the towpath, Boatwif leapt off with two bags of recyclable rubbish, and in a ripple effect, news filtered back from boat to boat. “Stuck! There’s a tree down!”

Boatwif trundled along the path, past the stationary queue to discover Tentatrice just pulled up at the wharf and a mound of foliage immediately ahead. Go to here for the Tentatrice version of events  …

To help nb Portia pull up at the second water point Boatwif then hauled more of the tree branches out of the water. Right on cue Techno Son-in-Law arrived (to deliver the Cheshire One) and he continued the tree clearing effort…

Liaison 3 successfully achieved (a day late), boat watered and serviced, the work began. There are 10 locks (Locks 66-57) between Wheelock and Hassall Green. Mainly the locks are paired singles. Traffic was brisk, boaters perhaps keen to make up on lost time after Deluge Day – or holiday hire boats with a schedule to complete.

There seemed to be more boats travelling south uphill than north (downhill). The sun beat down.

Working ahead, Boatwif arrived at Malkin’s Bank (Lock 62) to see Tentatrice floating in the full lock, exit gate open, but no sign of intended movement. The situation was assessed – logjam, or more accurately, a boat jam. The pound between Lock 62 and Lock 61 is short – and six other boats were waiting to use the one lock ahead. It was a painfully slow business, with very few boats coming down but more queuing to go up.

You can help, you can be efficient – but a lock chamber still takes a time to be emptied and refilled for one boat at a time. An hour passed by – and then, blessed relief, the logjam eased.

Boaters ahead helped by raising paddles to prepare a lock for boaters behind.

The motorway (M6) crosses below Lock 58.

Up Lock 58, another duplicate pair.

Then came another logjam, the single chamber at Lock 57.

Up Lock 57, to moor as so often before. The further away from the lock the less intrusive is the motorway noise. And on a sunny evening with a wide patch of grass it was worth setting up a table outside.

Boaters familiar with this stretch of the T&M often reminisce about the ‘Romping Donkey’, a popular pub a two minute walk from Lock 57. It fell into disuse, the building looking increasingly near to collapse. Look now, refurbished and extended –

There was a fine sunset

Tuesday: Up the two Pierpont Locks, with hazy glimpses of Mow Cop…

In the long rural pound before the two Thurlwood Locks there was steering practice for the Cheshire One.

wary of the gate paddle on the top gate.

then onwards, the clouds thickening. Past the C&RT workboats,

up the Lawton Treble Locks, 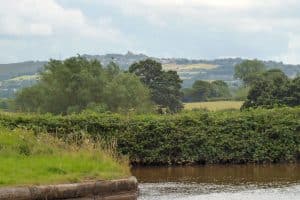 – to queue again at the two Church Locks. During the waiting there was a lively Staffordshire oatcake and bacon conversation.

Just above is a long line of moorings – this was to be the next liaison point. Up, eventually, Cleddau rose, the boat secured just as the first spots of rain fell, followed by lightning flashes and thunder. “I love thunder,” the Cheshire One pronounced enthusiastically. (A genetic factor…?)    Shortly, minus coat, Techno Son-in-Law arrived and, 20 locks worked, the additional crew member left.

In a brief break in the rain there was a familiar walk up to All Saints’ Church, at Church Lawton,

Does this site have a link to Chester Cathedral? Maybe. The body of St. Werburgh, who had died in Lincolnshire in about the year 700, was transported across country to Chester to avoid the marauding Danes. It is thought that her body rested overnight at the site of Lawton Church. The first monastery in Chester was founded in her name and in her memory. (Source: church history pamphlet).

The first church rector was appointed in 1180. The church interior is very light,

with a flat ceiling and an organ gallery.

After a fire in the nave in 1798 the body of the church was rebuilt. The church on the mound was here long before, 600 hundred years before the canal – a reminder that English canals are really relatively modern…

Next time: A bleeding wolf and a Tudor rose